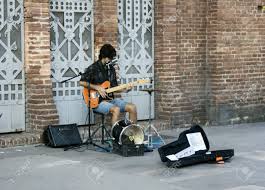 IF I ONLY HAD A DOLLAR, for every song I´ve sung,…

Sidetracks And Detours are pretty sure that Lorde set out as a singer/songwriter simply to share her music with a world she hoped would enjoy it.

Not everyone, though, that sets out the lonesome highway enjoys such success and the karaoke bars and the open-mic nights feature so many who didn´t but still hold out what even they recognise as forlorn hope. Anyone who listened to the first episode of what promises to be a brilliant new six piece comedy radio series by my Lendanear song-writing partner, Colin Lever, broadcast recently, will have been aware of the Gallows humour and unfulfilled ambition that exists in such places.

Lorde, of course, became a massive star in the process of sharing her music, but as the lyric by John Fogarty, (right) written for his band Credence Clearwater Revival, not every folkie who ever sang at an open mic night made it out of there alive.

Just about a year ago
I set out on the road
Seekin’ my fame and fortune
Lookin’ for a pot of gold
Things got bad and things got worse
I guess you will know the tune
Oh Lord, stuck in Lodi again.

The man from the magazine
Said I was on my way
Somewhere I lost connections
I ran out of songs to play
I came into town, a one night stand
Looks like my plans fell through
Oh Lord, stuck in Lodi again.

Yelich-O’Connor (aka Lorde, (shown right) was raised in the suburbs of Auckland and demonstrated a knack for public performance at an early age. At age 12 she was signed to a development contract with the Universal Music Group after an agent received footage of her singing at a middle-school talent show. A lifelong fascination with royalty and aristocracy inspired her stage name, although she appended an e to the end, as she felt that “Lord” was too masculine.

Working with producer Joel Little, Lorde honed her natural gift with words—her mother was an award-winning poet—and the pair produced The Love Club, a five-track EP that was released for free to the Internet-streaming service SoundCloud with little fanfare in November 2012.

Invisible people who are, somehow,  ´Industry tastemakers soon took notice, and The Love Club—and its lead single, “Royals”—rocketed up the charts in New Zealand. The “Royals” buzz rapidly went global, and in August 2013 Lorde became the first female solo artist in 17 years to top the U.S. Billboard alternative chart.

In 2014 Lorde won Grammy Awards in the best pop solo performance and song of the year categories, both for “Royals.”

After setting out on an already sell out  North American tour in March 2014, the following month saw her join the surviving members of Nirvana onstage to perform the song “All Apologies” at the ceremony celebrating that band’s induction into the Rock and Roll Hall of Fame.

In August she added to her already-impressive collection of accolades when “Royals” won the MTV Video Music Award for best rock video, making Lorde the first female artist in MTV history to triumph in that category. She then spent time in the studio curating the sound track for The Hunger Games: Mockingjay—Part 1, the 2014 film adaptation of Suzanne Collins’s young-adult best seller. Lorde contributed the single “Yellow Flicker Beat” as well as a cover of “Ladder Song.”

Powered by the lead single “Green Light,” Lorde’s sophomore album, Melodrama (2017), was greeted with an overwhelmingly positive critical reception. Melodrama’s 11 songs explored themes of youth and womanhood with a sound that drew on influences ranging from modern electronic dance music to retro Europop to the soaring vocals of early Kate Bush. Lorde then took a break from music, and during this time she avoided social media and became more involved in various causes, notably visiting Antarctica to explore the impact of climate change; she recounted the journey in the short book Going South (2021). This period also resulted in a musical shift for Lorde, who returned to the studio for Solar Power (2021), which was noted for its breezy, lighter sound.

Alli Patton reports that all artists want to do is bring music to fans, but in today’s touring landscape, that’s becoming an increasingly difficult feat.

Earlier this year, Santigold touched on the side effects of touring  today. “As a touring musician, I don’t think anyone anticipated the new reality that awaited us,” Santigold wrote in a letter to fans.

New Zealand dream-pop siren Lorde mirrored this sentiment in a recent newsletter. With so many tours plagued by cancellations, the singer, currently on tour herself, gave insight and shared the realities of touring today.

“Things are at an almost unprecedented level of difficulty,” Lorde said. “It’s a storm of factors. Let’s start with three years’ worth of shows happening in one. Add global economic downturn, and then add the totally understandable wariness for concertgoers around health risks.”

“To freight a stage set across the world can cost up to three times the pre-pandemic price right now,” she explained. “I don’t know shit about money, but I know enough to understand that no industry has a profit margin that high. Ticket prices would have to increase to start accommodating even a little of this, but absolutely no one wants to charge their harried and extremely-compassionate-and-flexible audience any more fucking money.”

While Lorde considers herself one of the lucky ones, she wrote, “For pretty much every artist selling less tickets than I am, touring has become a demented struggle to break even or face debt. For some, touring is completely out of the question, even if they were to sell the whole thing out! The math doesn’t make sense.”

The singer assures fans she is doing “pretty good,” but also pointed out the toll touring often takes. “You’ll notice a ton of artists cancelling shows citing mental health concerns in the past year, and I really think the stress of this stuff is a factor.”

She told fans her goal in writing her letter was to “illustrate that nothing’s simple when it comes to touring at the moment, and if your faves are confusing you with their erratic moves, some of this could be playing a part.”

What was that Joni Mitchell song about the guy playing real good for free? Written in simpler times, I guess.

Obviously, Lorde´s description shows the difficulties we fans perhaps overlook when we wonder why our local stadium venue doesn´t have a different top notch artist appearing there each night. Touring and live performances serve as publicity and as salespoints, even, for new merchandise, and enable an artist to build a rapport with their fan base.

And, of course, covid and the subsequent  (written by economic crisis have created difficulties in engaging with audiences, but as shown by the songs we referenced here from John Fogarty, and Joni Mitchell and Dusty Springfield (written, of course, by Goffin and King,left) it has, perhaps, been ever thus.

Next week Steve Bewick´s Hot Biscuits Jazz Broadcast offers up a live session from the duo of Robin Sunflower on chromatic harmonica and Freddy Garner keys from the Creative Space. There is also music from Michele Osten, who tells us it gets easier. Pat Thomas will be  Playing the Duke. Barb Jungr is revisiting Woodstock with Laurence Hobgood. The Sam Braysher Trio are telling us `little white lies` but the show  finishes with Luís Martelo – Trumpet on Hello Dolly. If this looks good then share with your friends and join Steve 24/07 on mix-cloud