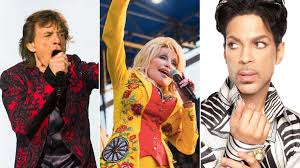 Upon receiving her induction into the Rock and Roll Hall of Fame in 2022, the American Songwriter journalist reminds us, which she initially declined but later accepted, Dolly Parton (left) made a vow: she would record a rock album.

“I’m not expecting that I’ll get in, but if I do, I’ll immediately, next year, have to put out a great rock and roll album, which I’ve wanted to do for years—like a Linda Ronstadt or Heart kind of thing,” said Parton when she was first nominated. “So this may have been just a God-wink for me to go ahead and do that.”

Parton also shared that her husband, Carl Dean, is a huge rock fan, so she would be making the album partially for him. “When I got nominated for the Rock And Roll Hall Of Fame, I thought ‘Well, no better time to do it,’ said Dolly. “I had always wanted to do it. My husband is a big hard rock and roll fan, and for years I thought, ‘One of these days I’d like to do an album mainly just for him, just to kind of do it.’”

She added, “When I got nominated, I thought, ‘Why not just go ahead and do it while the iron’s hot—maybe have some of the greats, the legends of rock, on there playing, if they would.´

The working concept of the album involves more than covering songs, said Parton, who wants to feature the various rock bands associated with each song to join her, as well as including some original tracks. “I thought about writing a song called ‘Rock of Ages,’ where I get all the great old rock and rollers,” she shared, “the people that I have always admired and respected.”

In the months leading up to her Rock Hall induction on Nov. 5, and following, Parton has kept her promise and revealed more of the songs she intends to include on her album. During a recent appearance on The Tonight Show Starring Jimmy Fallon on Nov. 30, Parton—who performed her new song “Rockin’” during her Rock Hall induction—even shared the title of the album, Rock Star, and that it will be out in the autumn of 2023.

She previously hinted at doing an Elton John song and Aerosmith’s Steven Tyler appearing on the album, which is rumoured to be produced by Steve Albini, along with renditions of songs by Led Zeppelin, The Rolling Stones, Prince, and more.

Here’s a look at five songs the 76-year-old country (and rock) legend has revealed will be on her very first rock album.

Parton recently revealed that she is planning to cover The Rolling Stones‘ 1965 classic “(I Can’t Get No) Satisfaction.” Whether members of the Stones are confirmed to join her on the recording is unknown, but Parton stated that she wants them involved.

“I’ve always wanted to do the song ‘Satisfaction,’” said Parton. “That’s one of my husband’s favorite songs. And I may have to drag Mick [Jagger]’s guys up there to help me sing it.”

Parton added, “I loved Jagger, and I love ‘Satisfaction.’ I’m hoping we’re both around long enough when I get to doing this record that he’ll come sing with me, and I may have to use The Rolling Stones to play behind me.”

Dolly also wants to reunite surviving members of Led Zeppelin for a cover of their 1971 classic “Stairway to Heaven.” “I’m trying to see if Robert Plant (left) might sing on it,” said Parton. “Maybe Jimmy Page might do the pick-up part on it.”

The last time Plant and Page recorded together was on “My Bucket’s Got A Hole In It” for the Good Rockin’ Tonight—The Legacy Of Sun Records compilation in 2001. The duo last performed together as Led Zeppelin on Dec. 10, 2007, along with founding Zeppelin bassist John Paul Jones, for a full-length concert, their first show together in more than 27 years. Led Zeppelin’s final show with late drummer John Bonham was on July 7, 1980, in Berlin, Germany. Bonham died on Sept. 25, 1980, at the age of 32.

Parton is a long-time fan of “Stairway to Heaven” and previously recorded a version of the song on her 2002 album, Halos & Horns.

“I may do up a version of something like Lynyrd Skynyrd’s “Free Bird,” said Parton, “and do my own versions of some classic things that I think would make good rock and roll songs.”

First released as the closing track on the band’s self-titled debut in 1973, and still, the band’s signature song, the “Free Bird” lyrics explore the liberation and loneliness of being on the road

—If I leave here tomorrow

Would you still remember me?

For I must be traveling on now

‘Cause there’s too many places I’ve got to see.

Lynyrd Skynyrd’s original recorded version runs for more than nine minutes with the lyrics ending at the five-minute mark and the band’s music, notably some of the most classic guitar riffs, closing out the remaining four minutes. (It’s unknown how long Parton’s version will run, but if she gets members of Skynyrd on board it may be a lengthy one.)

During her Rock Hall speech, Parton mentioned several artists she would like to collaborate with on her rock album and revealed that she and Perry will sing a cover of Journey’s 1981 hit “Open Arms.”

“If Dolly says it’s true, then it must be true,” wrote Perry on social media, confirming his participation. “Her voice is amazing.”

Written by Perry and keyboardist Jonathan Cain, and released on Journey’s seventh album, Escape, “Open Arms” was also featured on the soundtrack to the sci-fi film Heavy Metal.

When Parton recently appeared on The Tonight Show Starring Jimmy Fallon, she also promised another classic cover on her album, Prince’s “Purple Rain,” the title track of his sixth album in 1984, the soundtrack for the film of the same name.

Purple Rain became Prince’s first album to reach No. 1 on the Billboard 200 chart and spent 24 consecutive weeks at the top. The album also earned Prince and The Revolution Grammy Awards for Best Rock Performance by a Duo or Group with Vocal and Best Score Soundtrack for Visual Media. Prince also won the Academy Award for Best Original Song Score.

The prime source for this article was written by Tina Benitez Eves and originally published in American Songwriter, a magazine that delivers scores of excellent articles on songs and songwriters.

Norman (right) has also been a long serving broadcaster, co-presenting the weekly all across the arts programme on Crescent Community Radio for many years with Steve Bewick, and his own show on Sherwood Community Radio. He has been a regular guest on BBC Radio Manchester, BBC Radio Lancashire, BBC Radio Merseyside and BBC Radio Four.