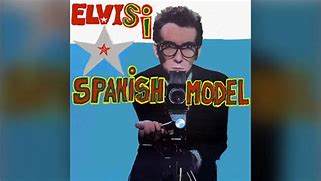 Grammy-award winning musician Elvis Costello has a new album, but you won’t hear his voice on it.

The new release, titled Spanish Model,  is a remix of the English artist’s 1978 This Year’s Model, but reimagined by an assortment of stars from the world of Spanish rock music, such as Colombia’s Juanes and Sebastian Yatra, (left) Argentina’s Fito Paez, Chile’s Cami and Puerto Rico’s Luis Fonsi.

British  singer, Nick Lowe, (right) says a very smart thing: ‘Spanish is the other language in which rock-and-roll sounds great,’” Costello said. “And so much music that I love has rebounded back and forth between different continents.”

Spanish Model, in which Costello worked with producer Sebastian Krys, a multi-Grammy-award-winner, added no new music to the original tracks — just small arrangements to allow for the creativity of the guest artists.

Colombian singer and songwriter Juanes recorded a version of Costello’s 1978 track Pump it up, with its sarcastic lyrics and stomping rhythms that reached number 24 in the UK charts.

Chilean singer Cami recorded This Year’s Girl, written by Costello, and performed by Costello and The Attractions.

´What’s interesting about this, and has its own charm and width, is hearing all of these different singers take on the story of the songs and also, not just singing a literal translation, but singing an adaptation, and sometimes being as bold as to change the story or change the emphasis of the story,´ says Costello (left) .

The album keeps the original instrumental trademarks, like the organ and the beat, giving crossover listeners the chance to recognize the original songs. Costello said the instrumental mix worked with the voice of the artists in a different way, bringing a new perspective into how the band, The Attractions, sounds.

´It allowed the band to actually sound even more powerful, in some cases, because I wasn’t taking up so much space with all my attitude´, Costello reckons.

For the producer, the new album was an opportunity to expose Costello’s music to a new audience — and a brand new generation — in an innovative way.

´…It didn’t feel like a period piece, it felt modern to me´, Sebastian Krys says now. ´It could have been recorded yesterday, except that no one plays like that anymore.´

There have already been several positive reviews of Spanish Model, not least from the excellent on-line site at All Music, who say that:-

´On the face of it, Spanish Model seems destined to be a curiosity: it features the original Attractions backing tracks from Elvis Costello‘s classic 1978 album This Year’s Model with new vocal overdubs by contemporary Latin artists. Costello came up with the idea after revisiting the original session tapes for This Year’s Model in 2018 — he and his co-producer Sebastian Krys were turning This Year’s Girlinto a duet featuring Natalie Bergman — and finding the band sounded powerful in their own right with his lead vocals stripped away. He soon came up with the idea of recording a Spanish-language version of the album, recruiting musicians from around the globe — including Juanes, Nina Diaz, Jesse & Joy, Luis Fonsi, Fito Páez, and La Marisoul — to help translate and shape the original material into something fresh. Far from being an intellectual exercise, the resulting Spanish Model retains the vigour of the Attractions yet sounds brighter and openhearted in the hands of Latin singers. Some of the change in tenor is certainly due to the absence of a vitriolic young Costello. Back in 1978, he sang in a furious rush, spitting out insults and paranoia. The singers here take their time with the melody and the words, a shift that helps pull the compositions into sharp relief; they sound more pop and less punk in this incarnation. Even if the melodies feel more pronounced on Spanish Model, the barbed humour and spiky politics remain — Night Rally, performed here by Jorge Drexler, sounds prescient about 21st century fascism — and the decision to widen the net to include such non-LP songs as Big Tears, Radio, Radio, Crawling To the USA, and Running Out of Angels (all included as bonus cuts on subsequent reissues; (Radio Radio was on the original U.S. version of the LP) helps broaden the musical and emotional palette of the album. The end result winds up not as a curiosity but rather a small wonder, revealing new dimensions of the original recording while opening up these songs for new audiences´.

jazz in reading logo Should your preferred listening lean further towards jazz, we share some news from Jazz in Reading abouty a forthcoming event at Pangbouirne Jazz Club on Sunday 4th September 2022.

You can pay on door or on line in advance and the admission is only 10 to what is described as ´a really nice venue in a beautiful setting, with club bar prices and ample car parking. The Club runs every first Sunday of the month, and you can get further information from brian.greene@gigajam.com

The good people at Jazz In Reading have informred us of the next event at Pangbourne Jazz Club, at the venue of Pangbourne WMC (right), and it sounds it another terrific night.

Alan Barnes (left) is a prolific international performer, composer, arranger, bandleader and touring soloist.  He is best known for his work on clarinet, alto and baritone sax, where he combines a formidable virtuosity with a musical expression and collaborative spirit that have few peers.

His range and brilliance have made him a “first call” for studio and live work since his precocious arrival on the scene more than thirty years ago.

His recorded catalogue is immense.  He has made over thirty albums as leader and co-leader alone, and the list of his session and side-man work includes Bjork, Bryan Ferry, Michel LeGrande, Clare Teale, Westlife, Jools Holland and Jamie Cullum. He has toured and played residencies with such diverse and demanding figures as Ruby Braff, Freddie Hubbard, Scott Hamilton, Warren Vache, Ken Peplowski, Harry Allen and Conte Candoli.

In British jazz, the young Barnes was recognized – and hired – by the established greats of the time:  Stan Tracy, John Dankworth, Kenny Baker, Bob Wilber, and Humphrey Lyttelton.  But he is equally respected for his longstanding and fruitful collaborations with contemporaries such as David Newton, Bruce Adams, and Martin Taylor.

Alan Barnes’ unique musicianship, indefatigable touring, and warm rapport with audiences have made him uniquely popular in British jazz.  He has received over 25 British Jazz Awards, most recently in 2014 for clarinet, and has twice been made BBC Jazz Musician of the Year.

“His stylistic range is quite phenomenal… He has a wonderful capacity for suggesting a given style without actually imitating anyone.” – Dave Gelly, Masters Of The Jazz Saxophone.

“I was relishing the prospect of Barnes’s casually consummate musicianship, deadpan humour (he could be a comedian, if jazz ever fails him), and indomitable belief in a respected place for the music’s rich history in this eclectic and often forgetful world.” – John Fordham – The Guardian.

“Barnes plays music that was radical 50 years ago but he infuses it with so much passion and energy you could believe it was minted on the spot, which is always part of the story with jazz.” – John L. Walters, The Guardian

Sound to us like a night not to be missed if you are in that part of the world at the time.

THE MUSIC MAKERS and a sense of poetry