Blog
You are here: Home1 / Blog2 / Poetry3 / THE MUSIC MAKERS and a sense of poetry 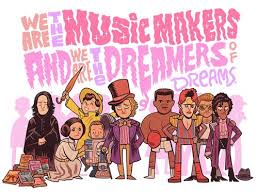 THE MUSIC MAKERS and the sense of poetry

We Are The Music Makers is an ode to the ones who dream and create. It is a tribute to artists, poets, writers and musicians who shape the world through their art. The poem celebrates those who refuse to play by the book and create a world of their own, who, despite being misunderstood by people play a great role in shaping the age they live in and bestow their work for the posterity to keep.

Published in 1873, The Ode by A.E:O’Shaughnessy’(left) which quickly became known by its first line We Are The Music Makers, was featured in the collection of poems titled Music And Moonlightand is actually an ode of nine full stanzas. The first three of the nine stanzas have been frequently published under the title We Are The Music Makers and is more popular than the complete ode. The three stanzas are composed of octets, with the first and the third stanza following a abababab rhyme scheme and the second stanza following an ababcdcd rhyme scheme.

So, that´s a lot of the technical stuff out of the way, but let´s look more closedly at what the poem is all about. Far from being just a celebratory ode to the ‘music makers’, the poem also explores the agency of art in the lived experience of people and how art affects the various aspects of society, ranging from politics to religion. Sparkling with exuberant optimism, this poem celebrates art, lauds the creative spirit and asserts that the dreamers of dreams have an active role to shape the age they live in. It doesn’t limit itself to a particular form of art but includes all the creative and artistic endeavours pursued by humans.

Providing a larger-than-life depiction of a segment of society which functions from its fringes (the artists, musicians, poets and such like), the first stanza describes how this group of people who’ve opted out of the dictates of the society actually play an active role in shaping the world despite being misunderstood and ignored.

The first person plural with which the poem opens (We are the music makers) resounds with bold assertion of the role of the ‘dreamers of dreams‘. Despite being perceived as an oddity who haunt ‘lonely sea-breakers’ and the ‘desolate streams‘, despite being the non-conformist ‘world-losers and world-foresakers´, the poets and artists are the real movers and shakers of the world. It is only natural that this tribute to the dreamer of dreams should begin with a sonorous alliteration of music makers and the dreamers of dreams.

The fact that poets and dreamers are seen in the lonely and desolate places is not only reflective of the solitude one requires to work on his/her art but also the individual’s challenge to the existing status-quo whereby s/he rejects the existing order. It is only after stepping outside the existing system that the dreamer of dreams can envision a new one.

The stanza highlights how these artists are perceived by the society – to the extent even of being viewed as lunatics. The line ‘Upon whom the pale moon gleams” is a reference to the ancient idea of considering the moon as having an effect in the mental states of people. ‘Lunacy‘ and ‘lunatic‘, often used to describe madness or insanity is derived from the Latin word Luna which stands for the moon. No wonder, the artists  “upon whom the pale moon gleams” are viewed as madmen by the rest of the world. The fact that they haunt the odd corners of the society under the light of the pale moon may also be interpreted as being reflective of the marginalized nature of the artists and poor economic conditions under which many artists create their art.

The second stanza emphasizes the timelessness of the art these music makers create and which lives beyond the age they are created in. This is made clear by stating how the timeless songs (deathless ditties) about the ancient cities outlive the actual cities which provide the subject for the song. We only need to think about texts like the Iliad, The Odyssey, The Epic of Gilgamesh, The Mahabharata and others to understand the veracity of these lines. Because such epics and poems are intangible in nature, they cannot be completely destroyed and therefore escape oblivion, a privilege not entirely granted to their physical counterparts. The places and civilization mentioned in these great works may have been destroyed but their existence remains, thanks to the art of the dreamers of dreams.

The subversive nature of Art is also dealt with in the second part of this stanza which states that a man may conquer through his ambition but all it takes is a musical bar (song’s measure ) to bring down empires. No wonder art is one of the first things to be censored when repressive regimes come to power. We only need to consider the subversive role of various artists throughout history and how governments did all they could to suppress their art to no avail. Whether it was Chopin whose music (especially his Mazurkas and Polonaise) was banned by the Nazi regime in Poland or the Chilean singer-songwriter Victor Zara who was asked to play the guitar after his fingers were brutally broken by the army of Augusto Pinochet, the artists and their art have always attracted the suspicion of insecure repressive regimes, only to outlast the regimes themselves.

The role of Art in shaping history and religion is underlined in the first half of the last stanza. The historical role of artists and poets is emphasized by citing Nineveh and Babel as an example. The two were ancient cities of which we find mention in the Judaeo -Christian tradition.

Nineveh was an ancient city in Assyria which Jonah the prophet didn’t wish to go to and prophesy about its imminent destruction. Babel on the other hand was a city whose people built a tower to reach God which was eventually destroyed by God who made the builders speak in different languages, leading to a massive miscommunication. (as per the Judeo-Christian tradition, that is). It is interesting to note that the real Nineveh and Babel are in ruins. But the Nineveh and Babel of words still remain and have easily outlived their historical counterparts. This definitely says volumes of the timelessness of art.  Because it is through the texts that we come to know about of their history, the poets and artists are may be said to have built the cities of the past. Conversely, they are also attributed as having destroyed them by “prophesying to the old of the new world’s worth“. Arthur also seems to suggest the role of poets in creating myths and religion and blurs the lines between poets and prophets by claiming poets to be the prophets of an age.

Thus, the poem assigns to the “music makers and the dreamers of dreams” a significant role in shaping the past, present and future of the world.

Art, myths, legends and oral cultures have served as intangible repositories in preserving the wisdom, achievements and the heritage of human civilization. This poem thus ascribes to the artist the humongous task of shaping and safeguarding all that is dear and valuable to the humanity through his/her art. And that is by no means a small feat.

Arthur O’Shaughnessy was born on May 14th 1844 to a London based family of Irish descent. As a young, aspiring poet of his time, he was a part of a group called the Triumvirate which included J.T Nettlestin and a poet John Payne. The Triumvirate was also known to have connections with the more famous poets of the time which included Ford Maddox Ford and Dante Gabriel Rosetti (left) among others.

In 1861, O’Shaughnessy began working at the British Museum and was later transferred to its Zoological Department. His passion however lay in literature and he began publishing from the first half of 1870 to 1874. The period saw the publication of works like An Epic of Woman (1870), Lays of France (1872), and Music and Moonlight (1874).

Following his marriage to Elinor in 1874 the husband-wife duo published Toyland, a collection of stories for children. Unfortunately, both of their children died in infancy and Eleanor passed away in 1879. Though he wasn’t regarded as a poetic talent in his time, Francis Palgrave in his book The Golden Treasury has elevated is poetic gifts, placing it second only to Tennyson’s.

O’Shaughnessy published Songs of Worker in 1881. In the same year, while returning from theatre on a rainy night he caught a chill (possibly pneumonia) and died. Arthur O’Saughnessy lies buried in Kesal Green Cemetery.

It is not necessary, I think, to understand poetry to understand the poem. To those who do understand them it might well be that metres and word origins, and scant rhyme might add to the enjoyment of the poem but most of us would understand the depiction (which they may or may not agree with) of the role chosen by, or imposed upon, the artist in society.

As with most great poetry, when we read We Are The Music Makers we learn not only more about its subject matter, but also learn about ourselves and our own world view.

It won´t surprise you that I love We Are The Music Makers.

I first learned of it at my secondary-not-so-modern school for boys in the nineteen sixties when, perhaps because of a brilliant delivery by my English teacher, Noel Drury I think I loved the technical aspects of it, even though I could not identify or articulate them at the time. But as I would later joke with my own students when working in schools as a visiting writer, try to include a little alliteration.!

I now realise that, although We Are The Music Makers was on the curriculum of schools like mine, Mr Drury was perhaps being quite off-message in so fully explaining to a class being prepared for technical or artisanal careers that we had a right to dream and that our dreams might one day change the world. There was perhaps a whiff of a Rebel Without A Cause about me in those days, and whilst O´Shaughnessy´s poem can´t vindicate the past fifty years of my life, I feel it certainly allows me to validate the attitudes I have carried with me through a life of music, song and poetry.

WHEN THE BOAT COMES IN