Blog
You are here: Home1 / Blog2 / Literary3 / a murmur of memories to come, carried on BEESWING 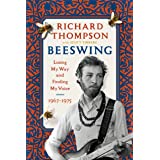 a murmur of memories to come, carried on BEESWING

I´ve only ever seen one live concert by Richard Thompson, and that was at, I think, Nottingham Civic Hall. He and his acoustic guitar and voice, his colleague´s violin, and their stories and the way they told them and, of course a set of songs that were poetry set to music, held a packed house absolutely spellbound.

I fall back under that same spell every time I play my Richard Thompson shuffle.

When I first heard him I´m pretty sure I didn´t know of his Fairport Convention connections (I must have known, but I have no recollection that I did) and I came to his music as if here just a n other emerging songwriter, and so threw wide my arms and summoned him to impress me. Songs like Vincent Black Lightning and Galway To Graceland introduced me to introduced me to a cast of characters I have never forgotten. And what stories they told. I have no idea whether Richard Thompson and John Stewart ever crossed swords or even whether their paths ever crossed but they both, surely, took the same sidetracks and detours. Each started off as a member of a folk outfit and seemed to write the rockier numbers in each case. Each blasted their guitar at us in memorable hooks and yet each could drop it to an acoustic backing to break your heart.

John Stewart was, and remains, my song-writing hero and yet while his was a big name in small circles, he remained pretty widely unknown in the UK, beyond those who  caught him on tour every few years in venues of forty or fifty capacity in  towns like Kingswinford, Prestwich or Ulverston.

I thought, in those days, that I knew enough about his work to write a biography that might have increased awareness of him, but when he told me he wasn´t ´big on books´ I was so scared of causing offence, I abandoned the idea. When John died without having written an autobiography I shied away from the idea again, so certain was I that there must be far better writers than I who would be moved to immortalise him in text. That hasn´t happened.

Richard Thompson, though, recently released what (we hope) will be the first of a collection of further Memoirs, because Beeswing is written as well as any of his narrative lyrics. The characters in his songs always seem beautifully drawn, often larger than life, and all carrying a book-full of their own stories  that somehow combine to tell the story !

The Guardian issued a great review when the book came out.

´Thompson has lived quite the life, and fans can read all about it next spring with the publication of Beeswing: Losing My Way and Finding My Voice 1967-1975. Tracing his life from his childhood, through his Fairport days, and into his music and life with the former Linda Peters, Beeswing is, in the words of publisher Algonquin, “an intimate look at a period of great cultural tumult, chronicling the early years of one of the world’s most significant and influential guitarists and songwriters.” The memoir will be published April 6th in the U.S. (by Algonquin) and April 15th in the U.K. (by Faber Books).

The middle-class, middle-aged couple posing rather awkwardly by the gate of their neat Wimbledon home on the cover of Unhalfbricking, the 1969 album that took the British folk-rock pioneers Fairport Convention into the pop charts for the first time, were the parents of Sandy Denny, the group’s singer. But they might just as easily have belonged to Richard Thompson, whose guitar-playing was among their earliest and most striking assets.

Born in 1949 and brought up in Highgate, another pleasant district of London, Thompson was the son of a detective with the Metropolitan police. By the time he started at a local grammar school, an interest in his father’s collection of jazz records had been diverted by the sounds of Buddy Holly, Gene Vincent and Eddie Cochran issuing from the bedroom of his older sister – who, in her early teens, “had pitched her look somewhere between Julie Christie and Brigitte Bardot”.

A gift for observation would help turn Thompson into one of Britain’s finest songwriters, beloved for such compositions as Meet On The Ledge, and the ballad that provides his book with its title. That same shrewd eye informs the recollections of a perennial succès d’estime, whose solo career, nowadays conducted from a home in New Jersey, has brought him a large and loyal following, an OBE for services to music and, in 2019, a 70th-birthday concert that filled the Albert Hall.

Thompson sensibly recognises that his public will be most interested in the events of his early career. The lives of famous rock musicians generally become less eventful and more mundane as they go along, the momentous stuff having happened at or near the start, and the subtitle of Beeswing is Fairport, Folk Rock And Finding My Voice 1967-75.

His account begins gently but blossoms into a gripping reflection on early tragedy, his conversion to Sufism, and a first marriage whose dramas were played out on stage. He is not the first to describe the progression from skiffle and folk music to rudimentary beat groups made up of school-friends and onwards to rock’n’roll – and, in his case, to a particularly significant variant of the basic form. But he does so with a fond and precise recall of such details as witnessing “the arrival of a new culture” at the 14 Hour Technicolour Dream at Alexandra Palace, where he sees John Lennon (right) “wandering around, looking every inch an impersonation of himself, with his moustache, NHS spectacles and Afghan jacket”.

He had already begun what would become regular visits to an occult bookshop in the West End of London, where his first purchase was Paul Reps’s Zen Flesh, Zen Bones, whose riddles made more sense to him than the teachings of his parents’ Presbyterianism. “This started me on a quest for meaning in my life,” he writes, without irony.

His telling of Fairport Convention’s swift rise to prominence and their momentous decision to bring the techniques of rock music to bear on traditional English folksong includes the late-night crash of their van on the M1 while returning home from a gig in Birmingham in 1969. Martin Lamble, their 19-year-old drummer, and Jeannie Franklyn, Thompson’s young American girlfriend of barely two weeks’ standing, were killed after a roadie fell asleep at the wheel, with Thompson making a vain attempt to keep the vehicle on the road.

There is a brief but touching description of his glancing acquaintanceship with the troubled singer-songwriter Nick Drake, a success-averse figure attached to the same management stable, and rather more about the equally ill-fated Denny, who left the group a year or so before Thompson to pursue, eventually, a solo career, but died after what seems to have been the last of many drunken falls, perhaps accidental, in 1978.

It was through Denny that he had met her best friend, the singer Linda Peters, whom he married in 1972 and with whom he formed a duo.

Their album I Want to See the Bright Lights Tonight started a joint performing career that ended when they separated after 10 years, during which they lived in Sufi communities in London and Suffolk and produced three children. At that point, having stretched his stated time frame at both ends, he chooses to bring the narrative to a close. “The wounds are still healing,” he writes, although Linda and the three children performed with him at the Albert Hall two years ago (reports of which, that we published last week, under the title of A Happy Birthday Party, remain available in or easy to navigate archives)

He is enlightening and sometimes painfully self-appraising on the complications of being in a band as it moves from squats to US tours. Among his closing thoughts are reflections on the problems arising from an audience’s desire to hear a 50-year-old song that may long since have lost meaning for its composer.

Perhaps the most affecting and enlightening chapter of all deals with the writing of the song Beeswing, its words inspired by the lives of two free spirits:

Anne Briggs, the gifted Nottingham-born folk singer who, like Drake, shied away from the spotlight at a time when it might have embraced her; and a former stable boy turned tramp named Ted who helped out in the Thompsons’ Suffolk garden. “I think we write songs for pleasure,” Thompson notes, “but also to understand ourselves and to decode life.” The same impulse seems to have guided this quiet joy of a memoir, in which honesty and humour are burnished rather than dulled by a certain restraint.

Beeswing: Fairport, Folk Rock and Finding My Voice 1967-75 is published by Faber (£20). To order a copy go to guardianbookshop.com. Delivery charges may apply.

Rolling Stone magazine & the Guardian were primary sources for this article

IN LIGHT OF A VERY BLUE MOON