Blog
You are here: Home1 / Blog2 / Music3 / KATIE MELUA listening to musicians she hadn´t heard of 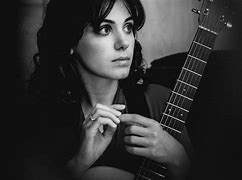 KATIE MELUA listening to musicians she hadn´t heard of

Her plush current release belies it´s mundane title of Album No. 8, carrying, as it does, lilting textures of the Georgian Philharmonic Orchestra. Katie Melua has also drawn evocations from disparate recording artists like Brad Meldau, Charles Stepney, Terry Callier, Ramsey Lewis, even vintage Cole Porter, plus the choreography of Germany’s Pina Bausch. In preparation for her new writings she read of folk trailblazer Bob Dylan via his Chronicles Vol. 1 tome, in which she highlighted any musician she hadn’t heard of. Then she meticulously researched every last one to create her own edifying, and ultimately life-changing, playlist.

Whatever medium writers might work in, though, they still seek to find ways of writing the personal as if universal, and with her seven year marriage to James Toseland coming to an end she felt she wanted to sharpen her writing skills in dealing with the metaphorical. To achieve this she enrolled on an actual short-fiction-writing course at London’s Faber Academy.

Having worked under the aegis of hit-making producer Mike Batt after pursuing her craft at the prestigious BRIT School, she was determined to pen every last No. 8 lyric, and so she did. Mission accomplished—apart from the sombre piano etude Heading Home and a conversely jazzy Voices In The Night, which were rooted in a trip back to the Caucasus mountains she undertook with her father,a good deal of the record deals with the breakup, albeit subliminally, in Joy, Airtime, Remind Me, and Your Longing Is Gone.

Her career began with Call Off The Search in 2003, and in only three years she became the U.K.’s best-selling female artist, although the singer was aware that she was also quickly acquiring a huge core audience overseas that still hangs on her every word.

Until reading a recent piece about her in Paste magazine on-line, (and believe me all music lovers should sign up for their e mail newsletters) I had always admired her writing, playing, singing and personality without ever being a great fan of a package that seemed to me less gritty than my usual fare.

Reading that she created her own playlist of artists she hadn´t heard, something I had done the previous week from my readings of Paste for a recent article called A Rose By Any Other Name, published in Sidetracks & Detours recently and still available in our archives, captured my attention. The verdict of Paste, a judgement I have quickly come to trust, suggested I should listen to this album. When I did so, I found a diversity and eclecticism of music and genres and a lyricism that suggested the young girl who had urged us to call off the search was now undertaking a search of her own and enjoying the experience. It seems her curiosity has provided her some answers to which she is now starting to pose some new questions, and it was to that curiosity the Paste interviewer posed his opening question.

Katie told him that she thinks that curiousity has always been a part of her life and her nature. She recalled that she first noticed it when her family moved to the UK from Georgia when she was eight years old.

´In the nineties, when we left Georgia,´ Katie explained, ´I’d never been taken to a library, because the country was on its knees back then. But when I moved to Belfast, I of course went to the local library, and I was just blown away. I literally would just spend hours in there, browsing books, discovering anything I could get my hands on. And I was even more blown away by the fact that you could take away six books, for free, and I didn’t have to hand over any money. It really just blew my mind. So that’s when I first noticed that my curiosity was completely switched on — the first time I went to a library and understood how books made me feel.

I have been affected by too many what you might call touchstone texts to even mention, really. But at the moment, I’m completely obsessed with To the Lighthouse by Virginia Woolf, and also T.S Eliot’s Tradition And Individual Talent text. The literary world is just the world that I’m massively inspired by, and it’s been a particularly important part of the making of Album No. 8. I’ve always been fascinated by the mysticism that surrounds song-writing, and particularly lyric writing. So for me, where I’ve been able to find a certain world that inspires my imagination is anything to do with the literary world—delving into poetry books, going to study fiction writing at the Faber Academy.´

She claims that nobody in her Faber group recognised her, and says that although she thinks people know her music she wouldn´t say her face is all that well-known.

´This was a three-month course in short story writing,´ she responded to the interviewer´s questions, ´and I went there quietly every week. I found that the most important author I got introduced to there was Flannery O’Connor. Wise Blood is just fabulous, and I just dove into her work. And in going through courses like that, you learn how writers develop their style, which you can then apply to how you’re developing yours. So now, for me, it’s about creating a world with a certain sense of style to it, while making sure that it rings true and also stands up to all the traditions that exist in our industry. And I found that once I read Flannery O’Connor, Quentin Tarantino made sense to me. In Russian cinema and European cinema, that same level of violence and its brutal look just didn’t happen. But then suddenly, you had that in Tarantino’s work, so I felt like he was the godparent of that cinematic development. So if you listen to my song Airtime, of course there’s a breakup in there, But I was more interested in how to take certain personal stories and treat them with respect, but also honesty, so the story is just hinted at but never completely black and white. And I also wanted to resist the urge to be judgmental or lash out at anyone or anything that I thought had been wronged.´

The interviewer wondered how,even now, with the coronavirus, unavoidable climate change, and humanity teetering on the brink of its own destruction she could put to one side being angry and judgemental.

¨I know, I know,´ she laughed, ´and of course it is difficult. However, you can choose to get completely immobilized by all of that and feel utterly wretched, or you can look at how many people around you are pulling you up—look at the love that’s been on display alongside the pandemic. So it’s all about thinking, “Where am I going to get my inspiration from? And how am I going to view the world? Am I going to wallow in all the injustices plaguing the world or am I going to get involved in, say, all the charity work that’s being done and rally around the brilliant people that are making amazing strides forward in—and for—society?” So, as a creator, I try to maintain a certain optimistic aesthetic, and I don’t torture myself. I choose not to have a negative view of the world. But I don’t deny that all of that stuff is going on, and that all of that is terrible—you just can’t be an idealist right now, unfortunately. But I just try to stop and think, “How is this affecting my space? How is it affecting my work?´

Paste noted that after a few years that have seen herskydiving, taking flying lessons, even performing live deep beneath the ocean at one point in 2006, Katie now seems to be looking inward.

´Yeah. And the only person that can control that is yourself. No one else will do that for you. But that’s probably in the same realm as healing, isn’t it? Of medicine? And I find that utterly fascinating. If you do that through your writing, I think what happens on a daily basis is, you write as you dig deeper into your brain, your thoughts, your feelings, and your memories, and it ends up on records but really relieves your mind of those negative things. And to have that spark of self-discovery as you write I think is really magical.´

Whilst she thinks the internet is a fantastic resource she admits to occasionally finding it overwhelming.

´I love that, everything is available now, but you know,… for example, I’ve always said that I wanted to dive into folk music properly. But I would just look at the Internet and not know where to start. Then, I came across that book by Dylan and, because I was able to highlight all the names in it that really mattered, I suddenly had a three-hour playlist. And it was brilliant, it was transformative. And I think songwriters have a responsibility to inform the younger generation. Like, my uncles worked so hard to educate me as a kid, so I knew who Led Zeppelin was, I knew who Black Sabbath was. And if they hadn’t done that, I never would have been exposed to all that. So I just think that there’s a joy in discovering things in the music world. And when we went into the studio on this record, Bob Ezrin was involved as an executive producer. And he said to me, “Look—write down your ten most perfect songs. And make sure you know them, and know what they feel like when you perform them. Because that’s where you’ll get your quality benchmark—the standard that you want to live up to.”

So I still have that list in my studio—I’ve got Dylan on there, Joni Mitchell, Bill Withers and it goes back as far as The Man I Love by Gershwin. And #1 on my list was Summertime by Cole Porter, one of the most classic songs in the American Songbook. And I love Neil Young.