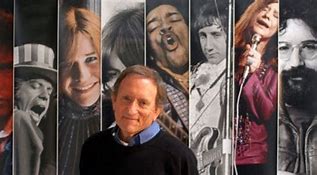 He was the first staff photographer for Rolling Stone and from then on Baron Wolman captured a generation of rock ’n’ roll’s most prominent figures. When he died recently, he left a legacy of iconic images behind

Wolman’s representative, Dianne Duenzl, said in a statement sent to the excellent and influential Paste on line  magazine that ´it is with a sad heart that we announce the passing of Baron Wolman on November 2, 2020. Baron died peacefully at the age of 83, after a battle with a long illness.´

Wolman, claimed throughout his career that he had been ´mixing business with pleasure since 1975,´ after gaining his entry into the industry with a photo essay of Berlin just shortly after the erection of the Berlin Wall. After leaving Germany for California, he landed the role of chief photographer at Rolling Stone, where he served from 1967 to 1970. From then on, his photos would be published on platforms like Esquire, Playboy, Vogue and Smithsonian.

Whilst his photographs addressed a wide range of topics, it was his music photography that seemed to most capture public attention. He shot intimate black-and-white profiles of Jimi Hendrix, Janis Joplin, Johnny Cash, Tina Turner, George Harrison, Syd Barrett, The Who, The Grateful Dead, Mick Jagger and B.B. King. Even after his stint at Rolling Stone, he continued to shoot concerts and musician profiles alongside a wide range of diverse material, including photo books on Israel from the air, Holy Land, and Vans: A Book Of Rolling Rooms. His final book was 2018’s Jimi Hendrix 1968|1970, which collected all his photos of the guitarist—portraits, candid and on stage.

Wolman also kept a sharp eye out for cultural shifts creating and created by inspired youth. He was one of the first to bring  Groupies to public attention. He befriended the girls and persuaded them to pose for historic portraits, sometimes even with the subject of their passion, that captured the freedom and style of young women newly liberated by the Pill, fashion and music.

Ever searching for the photograph that could take the cover and lead a story, he recognised the need to chronicle other emerging talent such as the young guns of literature, art and jazz. He spotted and photographed the flowers in the hair of San Francisco’s Summer Of Love which heralded the age of the Hippy, even starting his own magazine Rags to explore the scene.  While the hippies were urging us to ´turn on, tune in, drop out´ he never lost focus and never missed a shot that demonstrated the mantra and ethos of a generation,

Wolman’s final post to Facebook was of clouds rolling over the Golden Gate Bridge, along with the message: ´Just as the sun sets over the Pacific, so, too, is it about to set over my life. A few of you know that a year ago I was given the formal diagnosis of ALS (Lou Gehrig’s Disease), a disease for which there is no cure. Sad to say I’m now in the final sprint to the end. I go forward with a huge amount of gratitude for the many blessings bestowed upon me (family, friends, travels and more), with no regrets but with appreciation for how my photographs—my life’s work—have been received.

Leave comments if you wish, but please don’t ask any questions or expect any further words from me—I am very, very weak. Because of Covid, like thousands of others, I will pass quietly and with very few people around me. It’s been a great life, with Love being my salvation always.´

His photographs not only served to immortalise his subjects but also to immortalise their photographer. He captured the movers and shakers of an age of creativity in rock and roll that we thought would never die. His collection will surely endure these lean, lockdown times and as we and the arts and music re-emerge from hibernation his photographs will help revitalise, celebrating heroes of the past even as we aspire to emulate them, and even to take music to new destinations even those greats didn´t reach.

To learn more about how far-reaching was his own work you can see 2006 interview with Wolman and fellow photographers Jim Marshall and Michael Zagaris at Wolfgang’s in San Francisco at: