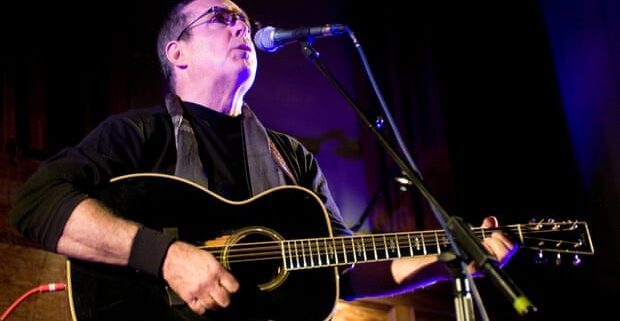 notwithstanding the bloody chicken

I wasn´t always aware, but have slowly come to realise, that Texas songwriter Tom Russell (left) may be the epitome of the traveling troubadour. He takes his songs anywhere he can, performing for audiences of varying sizes and dispositions.

It was an on line review, at Paste I think,  that compelled me to re-evaluate the music of a man who previously hadn´t found a place in my heart alongside the likes of Guy Clark, Townes and John Stewart simply because I´d pegged him as an intellectual rather than a songwriter.

This night under review ´was an unusually small show, being a house concert for about forty people ranging from diehard fans to the casually interested.´

These kind of events sprung up around twenty years in America where there was a whole generation of singer writers of Americana music no longer high profile enough, perhaps to fill a concert hall, or attract major promoters but were available for private commission to those with a home property large enough to hold enough ticket-buying patrons to pay the musician for the performance who would buy e By the end of the evening, Russell had won over the newcomers and affirmed the interest of the long-time supporters. House concerts, as undertaken by many other artists including Janis Ian, by their very nature are intimate affairs, with the performers up close and personal and truly “unplugged”, playing without benefit of microphones or amplification. Sadly, of course, covid has not only laid-low stadium and arena concerts around the world but also these semi-private gatherings, too.

´This particular house,´ the Paste reviewer told us, ´was in a historic district of a city near its state university, and had the advantage of a large living room that accommodated a number of folding chairs within the arc of antique sofas against the outer walls.´

According to the reviewer, ´Russell himself made reference to the surroundings at one point in the show in an aside to the promoter who he chided for, “having all this great art, yet there’s a Taco Bell Chihuahua sitting in the corner”. It was a humorous moment, one of several in a show that was marked by Russell’s self-effacing manner and willingness to poke fun at everyone else involved, too. In a cosy space like this, Russell didn’t need any help getting the songs across, but he carried his usual accompanist, Andrew Hardin, along with him to play some tasty lead guitar licks throughout the show. The set-list for the evening drew from throughout Russell´s lengthy song-writing career, with an emphasis on his (then) two most recent albums, Borderland and The Man From God Knows Where. Though Russell is primarily known as a songwriter, he began the show with a song from the pen of another legendary Texas tunesmith, the late Townes Van Zandt. ´

I learned from the review that said song was Snowin´ On Raton, my first among equals of Van Zandt´s lovely music, and a song that with its notion of lost horizons and liminalities was as important as James Hilton´s novel  in leading me to live here (on Shangri La Park, named after the fictional setting in the book) on Lanzarote. Our landscape here is that of a miniature wild west and many a morning I look out of my kitchen window expecting to see Townes riding on horseback through that pass that leads around the Femes Massif.

The reviewer said of Russell’s version of Townes´ song that ´it resonated immediately with the crowd, and the lyric that ends the chorus, “Come morning I’ll be through these hills and gone,” could be a fitting description of Russell´s own road-weary existence. The songs aside, one of the more enjoyable aspects of a small show like this is the opportunity for some interaction between the performer and the audience, which in this case was less than three feet away.

Russell introduced The Angel of Lyon, a song co-written with Steve Young, (who wrote the ghostly Seven Bridges Road, recorded by the Eagles) by remembering a woman Hardin had spotted in Florida the week before. Andy Hardin described her as The Angel of Tampa, but Russell and Hardin agreed that that just didn’t have the same ring as Lyon. ´That’s why you’re the songwriter,´ Hardin quipped back at him, to the crowd’s amusement. Their rendition of the song took a slow building verse into a chorus that Russell emphasized by stomping on the hardwood floor beneath him, punctuating the energetic tune.

From there, Russell took a chunk of the first set to play a few songs from his family-tree concept album, The Man From God Knows Where. He introduced this segment with a humorous tale of travels through Ireland and a poem that he stole the album title from, ´in the grand tradition of the American folk process.´ Amidst some more storytelling, Russell finished out the first set with an appropriately smoking take on Put Me On The First Thing Smoking,´ (a song to add to the pantheon of Americana trains songs like The City Of New Orleans).

The review noted that in this section Russell also ´included the Dave Alvin co-write, Down the Rio Grande, prefaced by Russell talking about having Alvin come out to his ranch in south Texas and putting him to work (Alvin supposedly tells him, next time, call Leonard Cohen.), and he even talked the audience into a sing-along on Sinatra Played Juarez, off of his album, Borderland.

During the second set, Russell delved deeper into his Tex-Mex tendencies, with Rose Of The San Joaquin, a Tejano-style anthem he co-wrote with noted cowboy singer Ian Tyson, and an unnamed song he sang in Spanish. Referring to the latter as ´tourist music´, Russell admitted he actually learned the song from the actor Harry Dean Stanton, whose version appears on the Paris, Texas film-soundtrack.

From there, Russell dug into his own extensive back catalogue for the Merle Haggard-like Blue Wing, another Dave Alvin co-write, Out In California, and the mostly spoken That’s What Work Is, which was accented by a lovely instrumental intro from ace acoustic-guitarist Andrew Hardin that Russell termed, ´West coast jazz´. Russell gave the attentive audience a treat with a new song, (probably called, Tulsa) that contains the memorable chorus, ´The dogs bark, but the caravan moves on.´ Giving Hardin a break, he then did a solo turn on his classic, The Sky Above, The Mud Below, a tune that chills the listener no matter how many times they may have heard it before. The set closed on a more upbeat note, with a Katy Moffatt co-write, Walking on the Moon, that Russell called one of his only true love songs.´

I have heard both Tom and Katy perform this song in their solo concerts at venues like The Winning Post at York, Bury Met and Ronnie Scott´s in London and it is such an uplifting song about young love, parental advice and Mom and Pop memories that is delicious slice of Americana.

The reviewer then told us that at this particular gig, ´Hardin was taking vocal and lead guitar duties on a hammering version of Driving Nails In My Coffin. Not even leaving the front of the room during the long round of applause that followed, Russell got a few last laughs with a comment about taking requests that referenced ´the song about the one-eyed fighting rooster — the one we’re not going to do tonight.´

In his own anecdotal style, the reviewer had triggered something in my mind that said this, Gallo Del Cielo, might be the real, and only, reason why I had previously not placed Russell amongst my elite squad of songwriters. Every gig I ever saw him play included this song, always after along pre-amble, always with fiery guitar bursts and always with atmospheric and urgent vocals, and always with the audience whoopin´and a-hollerin´ in faux Mexicana. The song always felt to be about the length of an album and I would find myself losing interest, and the will to live after the first verse or so.

Now, a review of the only concert I have ever heard of in which Tom didn´t include the song is the review that has reminded me how much I actually always enjoyed his performances, despite, not because of, Gallo Del Cielo.

Our reviewer noted that ´this direct shot at what is perhaps his most well-known song, Gallo Del Cielo, notwithstanding, Russell was willing to tackle almost anything else, it seemed, whether he knew it or not. He ended up capping the evening with Touch Of Evil, a self-described ´stadium folk-rocker´, that he forgot the words to part-way through, but after an admirable ad-lib, managed to finish nicely; and Haley’s Comet, one last Dave Alvin co-write for an audience member who admitted being an Alvin fan, too.

Ending the night like he started, on a light note, Russell even tacked on a reasonably precise Dave Alvin impersonation in the last line. Russell may not be a household name, even in the world of singer-songwriters, but for this evening, in this particular house, he was one for those lucky few in attendance.´

Whether a ´household-name´ or not Russell was described by Robin Denselow, in his review of a gig at the 100 Club in London, in The Guardian in 2015 as ´having more memorable songs than Les Misérables´ (the hot show in the city in those days of live theatre). And, as affirmed by the album shown left, Tom Russell still has Old Songs Yet To Sing

Denselow went on to say of Russell that ´he’s a singer-songwriter with a powerful voice, but also a novelist, artist and academic who can interrupt a song to discuss the history of Mexico and the American south-west, attack Donald Trump, or explain why he has chosen to play in this historic basement rather than a concert hall. Praise for the Kinks and the Stones was followed by impressive musical illustrations.´

I have my own fond memories of sitting in a Little Chef on the A64 a few decades ago with Tom Russell and Andrew Hardin conducting an interview for a short series of programmes on a community station called Radio Cavell. Tom was a good guy and I forgave him then for that song about the ruddy chicken. And today I have realised I have no right to deny him a place in my upper echelons of song-writers !

KATIE MELUA listening to musicians she hadn´t heard of