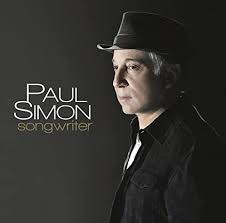 A few years ago, shortly after the release of the double album, Paul Simon: Songwriter, the artist spoke exclusively to music journalist Tom Moon about the collection:

When asked what had been his goal in this collection Simon replied,

´The Songwriter´ albums (Can you still call them albums?) are a collection of the best, or anyway, my most typical song-thinking. I left off some good ones—You Can Call Me Al, Mrs. Robinson, The Late Great Johnny Ace—but I tried to include songs that weren’t hit singles as well as the better known songs. I don’t always like the hits and I don’t usually pick the singles. That’s record company territory.´

Songwriter is actually one of many Paul Simon compilations available but here he played a part in the selection process, actually playing an active role in what he called ´record company territory´.

The late John Stewart, Townes Van Zandt or Guy Clark, are the names I automatically trot out when asked about which songwriters are the most important to me. Questioners´ eyes usually glaze over by then, so I don´t really know how far I might get down a list before mentioning the name of Paul Simon.

The truth is, however, that although I was vaguely aware of John Stewart as a voice in The Kingston Trio during my childhood, I didn´t in any way discover him as a singer-writer until The Monkees released their version of his Daydream Believer, and it would then be after I married, some seven years later, that I learned he had a solo career. I had by then formed my own folk duo, Lendanear, with Colin Lever and in the local folk clubs I heard purveyors of contemporary folk music, like Pete Benbow and Ged Morgan, delivering the works of John and Townes and Guy.

Their music would accompany me through adulthood, but by then Paul Simon´s work had walked side by side with me through nearly all my teenage years and early twenties. I´m useless at chronology, unless I look it up, but it seems to me that the first title in my Paul Simon songbook was Kathy´s Song, which I recall listening to almost constantly for a year or so as I traced hearts in the condensation on my bedroom window and scrawled I love,…..and then a fairly long list of names crossed out after they had dumped me.

Another memory that often tumbles out, probably anachronistically, is of a girlfriend who left me sitting on my own at a screening of The Graduate, because I became so wrapped up in the music of Simon and Garfunkel (and Dustin Hoffman´s brilliant performance) that I kept brushing away her advances.

Paul Simon songs, even now, are all over my audio devices, and at sixty seven I still drive round Lanzarote with Mrs. Robinson blasting through the car speakers. Even today, no song lifts me as high as the 59th Bridge Street Song (feeling groovy.) No other songs seems as dramatic, as eloquent, as lost as For Emily Whenever I May Find Her and they are all from the Simon and Garfunkel  years.

After the split and occasional re-unions Simon continued to write the soundtrack of my life. Fifty Ways To Leave Your Lover, Take Me To The Mardi Gras and St. Judy´s Comet were poppy enough to keep me young in my thirties, and Me And Julio Down By The Schoolyard convinced me I still retained some street-cred. American Tune made me feel like an historically and politically aware grown-up. Renee and Georgette Magrit (and their dog, after the war) made me feel more sophisticated and less lonely, Hearts And Bones made me aware of my own mortality and the later stuff with everything shining like a national guitar, and with moonlight sleeping on a midnight lake and the strutting of the girl with diamonds on the soles of her shoes came and made itself at home on my audio files for the rest of my life.

Then, as I passed my mid- fifties he wrote the songs for my middle age and later life.

Was I aware at the time that Paul Simon and Art Garfunkel were like the fractious Tom And Jerry cat and mouse characters that gave them their earliest name for their duo? Well, I could read the between the lines of the New Musical Express of the era and I certainly was left in no doubt by the later retrospectives in such as Q magazine. It was eight years later before a biography emerged that I hoped might shed some more light on the man who has provided a soundtrack to my life from puberty to pension-dom.,

I already knew that during his distinguished career Paul Simon has been the recipient of many honours and awards including 12 Grammy Awards, three of which (Bridge Over Troubled Water, Still Crazy After All These Years and Graceland) were albums of the year. In 2003 he was given a Grammy Lifetime Achievement Award for his work as half of the duo Simon and Garfunkel. He is a member of The Songwriters Hall of Fame, a recipient of their Johnny Mercer Award and is in the Rock n’ Roll Hall of Fame as a member of Simon and Garfunkel and as a solo artist.

His song Mrs. Robinson from the motion picture The Graduate was named in the top ten of The American Film Institute’s 100 Years 100 Songs. He was a recipient of The Kennedy Centre Honours in 2002 and was named as one of Time Magazine’s 100 People Who Shape Our World in 2006. In 2007, Paul Simon was awarded the first annual Library of Congress Gershwin Prize for Popular Song. Named in memory of the legendary George and Ira Gershwin, this newly created award recognizes the profound and positive effect of popular music on the world’s culture, and is given annually to a composer or performer whose lifetime contributions exemplify the standard of excellence associated with the Gershwins. In 2011 Mr. Simon was elected to The American Academy of Arts and Sciences.

Of Simon’s many concert appearances I have read that he is most fond of the two concerts in Central Park in New York (with his partner and childhood friend Art Garfunkel in 1981 and as a solo artist in 1991) and the series of shows he did at the invitation of Nelson Mandela in South Africa: the first American artist to perform in post-apartheid South Africa. In 1998, his performance on centre field at Yankee Stadium celebrating the unveiling of Joe DiMaggio’s monument is a treasured memory for this lifelong Yankee’s fan.

Paul Simon’s philanthropic work includes the co-founding of The Children’s Health Fund with Dr. Irwin Redlener. The CHF donates and staffs mobile medical vans that bring health care to poor and indigent children in urban and rural locations around the United States. Since it’s inception in 1986 it has provided over 3 million doctor/patient visits. In the wake of Hurricanes Andrew and Katrina it was the primary health care source for those communities decimated by the storms. Paul Simon has also raised millions of dollars for worthy causes as varied as AMFAR, The Nature Conservancy, The Fund for Imprisoned Children in South Africa and Autism Speaks and The Joe Torre Safe At Home Foundation.

When a new biography of Paul Simon emerged two years ago I hoped it might shed some more light on a man who has provided a soundtrack to my life from puberty to pension-dom, and to whom, for some reason, I never give the credit he deserves.

After reading the book, which I greatly enjoyed, I tried to quantify what I had learned about Paul Simon the man. I decided that some of the loose notions I had until then held of Paul Simon had been cemented into hard fact: it seemed he really is a driven, angst-ridden perfectionist who seems to become a benign dictator when apparently collaborating. Such tendencies might not make him the most popular kid on the block but if that is what it took to create such sublime work, they would be minor character flaws I myself would be prepared to live with.

Paul Simon has produced such an incrediblñe body of work that I constantly listen to and yet, in conversation and in writing, I often overlook him and his songs. Perhaps because I have never seen him perform live nor ever had the opportunity to interview him I unwittingly place him outside my usual sphere of preferred artists.

He has not provided me with a guide to life, or what I call the ´codes to live by that John Stewart has, maybe his songs don´t ache as deeply as Townes´ Snowin On Raton´or have the same wanderlust as To Live Is To Fly and I sometimes feel that, unlike Guy Clark, he has  never taken sidetracks and detours off the freeway. All that, though is mealy-mouthed because all my life Paul Simon has engaged me in Dangling Conversation, as I have walked his Bridge Over Troubled Water.