Blog
You are here: Home1 / Blog2 / AATA3 / A THOUSAND TIDES TO ANOTHER PLACE by Andrew Moorhouse 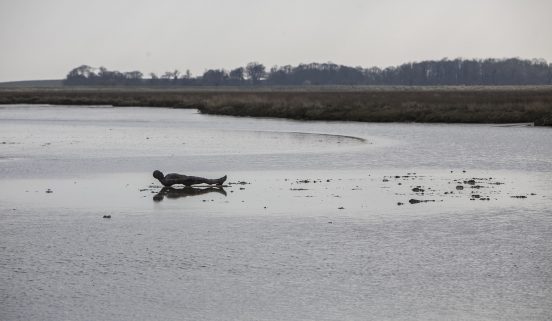 A THOUSAND TIDES TO ANOTHER PLACE

A Personal View of Laurence Edwards’ ‘A Thousand Tides’ and Antony Gormley’s ‘Another Place’:

´How noble in reason, how infinite in faculty, in form and moving how express and admirable, in action how like an Angel, in apprehension how like a god, the beauty of the world, the paragon of animals. And yet to me, what is this quintessence of dust?´ as the Danish Prince said.

Hamlet also said, “Oh that this too, too solid flesh would melt” (some say it’s ‘sullied flesh’ which I prefer but for the purposes of this piece I shall go for solid).

Sculptors have long worked on representations of the human body.

The Venus of Willendorf (left) is estimated to be around 30,000 years old. The ancient Egyptians, Greeks and Romans portrayed their rulers and military men, their philosophers and blind seers, their gods and monsters and their mythical heroes and beasts.

There are even fascinating images such as that of Medusa petrified by her own stare in the mirror of Perseus’ shield in hewn rock, classical marble. Sculptors were commissioned to fix their subjects in immutable stone. For perpetuity. Flesh made solid.

But we’re not like that are we? We are worn down by the tides of time. Ultimately we are ‘dust’. We diminish and our enlightened ungodly knowledge of our temporality without the surety of an afterlife (be it heaven, hell or purgatorial limbo) may mean that sculptural representations of humankind should also be subject to ‘the slings and arrows of outrageous fortune’.

Antony Gormley’s ‘Another Place’ (left) features 100 identical (at least they started as identical) cast iron sculpted men modelled on Gormley’s body. These are common men. The statues stand along 3km of sand and, at their most advanced position at 1km away from the shore. Each day’s sun rises from the East at their backs then the celestial body moves (No! the earth spins as Copernicus and Galileo asserted against the teachings of the Church) and the men, at close of day, look West as the horizon rises to obliterate the light. Dawn breaks behind them, the dimming of the day is ahead.

Since they were installed in 1997 tides have covered the statuary thousands of times and nature has taken its toll.

The further they are from the relative safety of the shore the more barnacled, carbuncled, warty, cankered, blistered, whitlowed or infected they are. Some have been swept off their feet and lost forever, some teeter on their base, close to the tipping point of a sea burial and an unconsecrated grave. Others survive and some have suffered injury and subsequently been repaired by their maker’s hand. Others live a charmed life. All are still, silent, stoic. (see right)

Perhaps they ponder what’s beyond that horizon. “The undiscovered country from whose bourn no traveller returns”. Another Place.

But Hamlet also advised his friend, “There are more things in Heaven and Earth Horatio than are dreamt of in your philosophy,” so perhaps we should recognise that our enlightened state still holds some dim and dusty places and our ignorance cannot be avoided.

Whilst Gormley’s individual men may or may not concern themselves with the unanswerable question, the unlikely possibilities of a life in that undiscovered country, perhaps Laurence Edwards numinous work, ‘A Thousand Tides’ offers a more equivocal, some may say ‘hopeful’ view of the passing of our corporeal life.

‘A Thousand Tides’ consists of a single sculpture of a man modelled on Mantegna’s painting ‘The Lamentation over the Dead Christ’(c 1490).  Edwards’ sculpture is cast in bronze and thus not as susceptible to the vagaries of time as the iron of Gormley’s men. Iron rusts, bronze doesn’t. Iron can be bent, bronze is less pliable.

Edwards’s man lies prone in shallow tides off the coast of the lowlands of England and not far from Sutton Hoo where the iron helmet of an ancient Anglo-Saxon king was found in the well preserved remains of his burial boat; a scuppered ship which held the body and possessions of a mere king.

Unknowing passers-by have reported seeing a body in the water to police. A BBC report tells us that Suffolk Police have said that Edwards’ sculpture is ‘quite realistic’.  As with the Gormley’s, daily drownings and subsequent resurrections occur. Diurnal baptisms.

The bible with its own mythologies tells us Christ could walk on water but that he also met his gruesome earthly fate at Golgotha.

Edwards’ man/Christ faces up, faces the heavens, he’ll be there a long time waiting for an answer from the repeated question of his gaze – ‘Why have thou forsaken me?’

Both sculptors manage, I think, to capture the nobility of reason, the boundless faculties, the bodily ‘form’, the acuity of the thinking human whilst making these structures appear aware of the all- pervading knowledge of the ultimate melting from our solid state.

I like both works of art a great deal – placing monumental sculpture not in museums or the walkways of baronial halls or indeed as commissions to decorate public parks but in remote places battered and blessed in turn by nature like the elementally sculpted ‘Jachelt’ tree of this poem of mine from a few years ago when I was perhaps less accepting of the possible consolations of faith.

That time we were in the Baltic Gallery

And wandered through the statuary

I’d wanted to be one of the models

A fractured, insubstantial image of me.

But I’d have wanted it cast out

In some godforsaken place

A rocky outcrop at the back of beyond.

A roost for ravens,

The piece I wrote about Another Place was full of my usual faint echoes of songs I love that came to mind due to my proximity to the shore and because of being surrounded by a crowd of people / sculptures. The work came out in a, perhaps too forced, stream of consciousness style that I never expected to see published by that enlightened arts editor Rob Howell included it in full in an issue of his quarterly magazine; Mailout

I reproduce it here simply as a compare and contrast of the different routes Andrew and I have taken to Gormleys work; Andrew took the searching, probing, erudite path and I have sought out hideaways from which to seek a more voyeuristic viewpoint, but our sidetracks must have crossed and our detours must have run parallel throughout our journeys.

HAVE YOU EVER SEEN THE RAIN?

Emerging from the womb of sand upper torso first becoming fully erect gazing seaward standing separate and solipsistic; devoid of soul yet soulful missing a heart-beat yet hopeful yearning reaching to a horizon where a stiletto sun-shaft pierces uncompromising threatening clouds slowly dragging further out of their reach a miserable tide. Ageless, yet old from birth old before their Time bedraggled by barnacle and limpet stained by rain on the cold coast braceletted colourfully by those who come to visit them to conserve them to converse with them in silent commune to see whatever it is they with hollow sightless eyes can see.

Where sky is kissing sea cranes and rigs are huddled together as pirates plunderers and pillagers of the ocean bed where sleeps the pilgrim and the pioneer and the cartographer and the navigator and the sailor and Jesus was a sailor when he walked upon the water. Tin-god and iron-man standing on the beach in another place stoned by sand bronzed by sun and pissed on by dogs indifferent to their statutory rights of man rites of passage from land to sea to another land another place another race another time waiting for no man fashioned in his own image.

Naked they enter this world and naked they depart and if in the midst of life there be death then they in their deathlessness see thee more clearly hold thee more nearly and love thee more dearly than those building castles in the sand who are still looking to the horizon and hearing the sea song always the sea song as aborigines following song-lines to the coast.

Wave after wave after wave anointing their feet cleansing the pedestals upon which they stand android-like looking out to the sea again to the lonely sea and the sky and the weather coming in and the ebb and flow and ebb of dreams and a star to guide them by serving no purpose but to stand and await annihilation and regeneration impassive and proud as wind snakes sand and diamond dusting along the tide line, lifeguards perhaps or soldiers of King Canute landlocked sea-bound and permanent.

A primeval force born to die or to die trying casting long shadows motionless emotionless and emotive; silent witness to the drama still amidst the maelstrom of public opinion oblivious to furore of gods created by man on this a Sunday too a November afternoon of early darkness made earlier by a closure of the sky by rain clouds looming over the ocean obscuring vision leaving no trace of their existence no footprint no shadow for art is ephemeral; no progeny no notion of present past or future they will return from whence they came somewhere beyond our imagination beyond the farthest reach of time yet will stand… though the heavens may fall stars may dim suns may fade and moons may wane for they are not of this universe but are from the black holes in the sea the grave holes in the earth and the last priest on earth will utter

and none will mourn their passing

save we few who know or think we know or know we understand or understand we can never know we few who hear the sea song, always the sea song telling us it’s not too far from Elvis Presley to Saint Bernadette who see them submerging under wave after wave after wave one by one by one in single file in iron filings by nature defiled never to be entered into any missing persons file of those not missed by any next of kin and the tide will wash clean the sand and there will be nothing where there has always been nothing but the transients of man the beachcombers and the donkey riders and the sun-seekers and the bucket-and-spaders and the bird watchers and none will look out to the horizon and wonder what lies beyond or wonder whether the earth is round for we know it to be so and no one ever thought it was flat or thought that man made man-of-tin would emerge from the womb of sand and walk without moving out into the ocean to drown to escape the consciousness of all but those who remember Chinese migrant workers on shifting sands and we few who hear the sea song

so the healing process may begin.

A BROADCAST FROM FRIENDS IN BERLIN