Blog
You are here: Home1 / Blog2 / Music3 / RADIO PRESENTER MEETS THE BUMS AT THE BAR 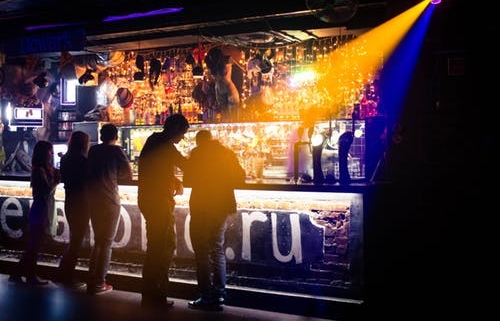 PORTRAIT OF THE ARTIST AS AN OLDER MAN

The Five Bums At The Bar ask Steve Bewick, who, what, when, where and why

The naming of his debut novel as A Portrait Of The Artist As A Young Man, by James Joyce, and the references to his own age by today´s interviewee, perhaps enable us to give this article the title we have.

Described on Wiki as a ´Kunstlerroman in a modernist style´ Joyce´s book followed the story of his fictional alter ego through a religious and intellectual awakening. Throughout the work Joyce references those already referenced in Greek mythology as ´craftsmen.´ The tale is one of questioning and rebellion against the Catholic and Irish conventions in which Joyce grew up and thus is a fore-shadowing, in the writing, of what would become the revolutionary literary techniques of Ulysses in 1922 and Finnegan´s Wake.

In reading some of Steve Bewick´s response to questions from these five bums at the bar, you may come to think that Steve´s awakening to jazz was much like Joyce´s intellectual awakening.

Steve Bewick regularly presents jazz programmes on the radio and occasionally writes for jazz magazines, so the five bums wanted to know WHO are the jazz musicians to have made the biggest impression on him,

´Undoubtedly it was the sounds of Miles Davis in that 70’s period of his, particularly on the Bitches Brew album. The performers on that album became a search list for me to find more music and musicians of that jazz fusion period.´

The five bums then interrogated Steve about WHAT radio programmes he presents and WHAT his audience can expect from those shows?

´Hot Biscuits (on fcum radio on-line) has been my mainstay program for some years now. This is a jazz and improvised music selection. I try to give a range of flavours over the lifetime of this music genre. This represents what I would identify as being six broad periods, including, New Orleans, Big Band swing, bebop, hard bop, Avant Garde and today´s movement into jazz fusion with a whole range of musical influences.´

WHEN, though,did Steve first fall in love with jazz and WHEN did he first start broadcasting?

´Ha, ha, ha, I fell in love with jazz at the Isle Of White Festival. This was all quite accidental. I had gone with the main aim of seeing Jimi Hendrix but slept through his performance due to an excess of the Broon stuff. My error was compensated, though, when I experienced Miles Davis playing his new jazz to 100,000 people, My first experience of broadcasting was as a volunteer with our local hospital radio station. Playing requests whilst introducing jazz into the gaps.´

WHERE does the presenter´s love of music take him, the five bums wondered, in terms of locations and gigs and where in life has music been important to him?

´Metaphysically music takes me to another place and time; sometimes my past and at other times my future. Music takes me to a place for me to relax in and re-charge the mental batteries of life and its challenges. Physically I love the local jazz clubs in and around Greater Manchester. There is a new and growing jazz scene in London, too, with an exciting new fusion of Jazz/Hip Hop and Rap. I have only heard it online but would certainly like to see it live. I’m also a new fan of Stormzy following Glastonbury 19.´Coincidentally that burgeoning London scene was mentioned to Sidetracks And Detours by a reader earlier that same day. That reader, here holidaying from Wales, raved about the artists currently appearing at the Union Hall venue under a jazz banner, telling us to listen out particularly for the Neil Crowley Trio. I must confess to having been totally unaware of the Neil Cowley Trio until their name was mentioned in that passing conversation, but on checking them out I found myself wondering what planet I have been living on for the past ten years or so. I have learned, much to my chagrin, that The Neil Cowley Trio was assembled by Neil in 2006, after he split from a duo called Fragile State, to record a solo album called Soundcastles. The actual Trio´s first recordings were cover versions of You Say You Want A Revolution and Revolution Number Nine by the Beatles, having been commissioned to do so by Mojo magazine.

They have spent the last ten to fifteen years honing their craft, and according to the headline of an article by John Fordham in The Guardian newspaper in October 2016, The Neil Cowley Trio are now ´jazz stars who make pop music of headlong vivacity.´

In reviewing one of their gigs at Union Chapel, London, Fordham spoke of how Neil Cowley arguably qualifies statistically as the most listened to pianist in the world and drives a deceptively laid back. His music is often hook-driven but is, at other times, as reflective as any cinema score. On the night Fordham was writing about, he reports there were hundreds of people queuing around the Union Chapel venue to witness Cowley´s ´music-visuals and lights show´ telling his self-penned science fiction story of Spacebound Apes

In the same performance, The Neil Cowley Trio also delivered His Nibs, which Fordham said has a ´serpentine, contrapuntal overtow.´

So, everything my neighbour had enthused over, and that John Fordham had written, seemed to create an impression of a fusion band of those alchemist-musicians that John Stewart once described as ´people out there turning music into gold.´ The journalist offered a caveat at the end of his piece, though, with the disclaimer that ´jazz or improve, it ain´t,´ but concluded, instead, by saying that the band´s ´refreshing eccentricity and big idiomatic sweep puts Neil Cowley´s work in a class of one.

Sidetracks And Detours have also recently celebrated the fusion music of bands like Orquesta Catacumbia, and only last night we heard the extraordinary sounds of veteran flamenco musician Antonio De La Rosa with his new (and still fluctuating) line up of Flamenco Fusion. His band, with him leading on classical guitar, consists of a  sensuous sax player, a violin virtuoso, two beat-box players and percussionists and two males and two females as extravagant backing vocalists as well as a furious flamenco dancer. Together, under Antonio´s proud even whilst ever watchful eyes, they are re-contextualisng the flamenco movement that has been so overwhelmed in the view the world´s tourist industry into a deserved and legitimate part of the new world music order.

Stormzy is the professional name of one Michael Ebenazer Kwadjo Oman Owuo Junior, a British rapper who is certainly creating an exciting new genre.  He first drew attention on the UK underground scene with Wicked Skengman, described as ´a series of freestyles over classic grime beats.´

He initially released Shut Up as a freestyle on You Tube, which went viral and reached number eight in the UK charts and he won successive Mobo Awards for Best Grime Act in 2014 and 2015 and was named as a Promising Artist on a list of BBC Sounds Of 2015. Subsequently his debut album, called Gang Signs And Prayer, released in 2017, became the first so-called Grime album to reach the top of the UK mainstream charts and won a Brit award for Album Of The Year.

In 2018 Stormzy followed that with his first number one single, and this year made that headline appearance at Glastonbury that so impressed Steve Bewick.

Because Stormzy wore a union jack stab vest, designed by Banksy, at this gig, his performance was received by many as a comment on the frightening rising knife-crime levels in London throughout the year. Such political awareness and social comment has, in fact, been a feature of Stormzy and his work ever since he criticised apparent government inertia in the aftermath of the Grenfell Towers tragedy.

Meanwhile, all across the arts know Steve Bewick to be so much a Miles Davis fan that it seemed appropriate that when he visited us here on Lanzarote a year or two ago he created his own Sketches Of Spain with a pencil. So our five bums asked him, as both a music lover and a dabbler in other art forms too, WHY art is important to him?

´Art has always been a pleasure of mine from a young age. Its as old as the sounds in the household from the radio and the record player. Gainful employment later earned me the money to buy me things to hear, look at and appreciate.´

´However, the time for drawing was misplaced with other new interests of a young man. Now I am retired so I have taken the opportunity to re-visit that old love of mine. I’m quite pleased with what I have produced after such a long time and I am even venturing into a new discipline of digital art. It’s a fusion of pop art and impressionism. These new intellectual adventures let me forget I’m no longer a ´Young Man.´

Whilst telling us he had enjoyed our e-mail interview Steve nevertheless was keen to know the identity of these five bums at the bar to whom we kept referring. I explained they were the epitome of a technique of open questioning I used to introduce to aspirant writers when facilitating creative writing groups.

I would give my advice added impact by drawing five consecutive, but slightly different version of the letter ´w´ on the board.

One would be lean and pointy, another round and lop sided, one very definitely uptight, another round and curvaceous, and the fifth with a very pronounced centre. Each looked like it was the bottom of a drinker perched on a stool in a pub, but do not be underestimate them.  This gang of five bums at the bar will always get their victim to talk, as Mr. Bewick has just testified !!