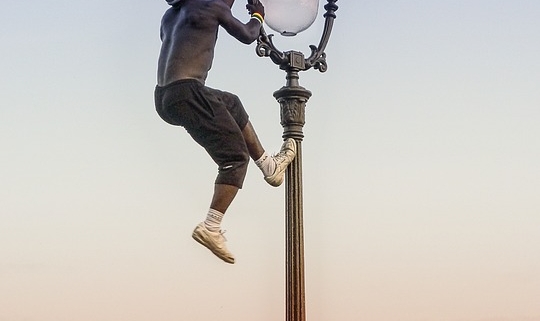 A ´playing out scheme´ recently devised by Alice (not Alex) Ferguson, a young mother, who wanted her own children to be able to play outdoors has produced benefits that surely should not surprise us.

Now the scheme has been studied by health experts who suggest that some streets or roads should be closed occasionally to encourage children to play out as those of my generation did in the fifties and sixties. Hundreds of communities in Britain have already signed up to a ´playing out´ initiative that could see streets being temporarily ´closed´ to traffic for a couple of hours a week. It is felt that this would allow children to play out safely, close to home.

The nationwide plan was then proposed by Bristol University and after studying the results of their experiments experts are claiming such play areas create a greater sense of community as and an increase in childrens´ activities on road closure days.

My Nana Andy in Tadcaster, (West Yorkshire) who looked after me for long periods of school holidays would have told the experts that, more than fifty years ago. There´d often be some pretty well organised games of street football on one stretch of road at Auster Bank Crescent, with a game of rounders being played between the next set of street lights, whilst some kids preferred to play on their bykes in a game in which they had to ´force´ opposing cyclists to put one foot on the ground. In the days of Hutton and Freddie Trueman we´d turn the streets into Headingley, a place of myth and legend only a short distance of ten miles away. It might as well have been at the other side of the world, so it was easier to replicate exploits our dads and granddads told us about than it was to find the bus fare and admission money to see our heroes in the flesh.

Instead, all the kids off the estate would be playing some game or other on the narrow streets that formed a square around the houses, and we´d be out from nine o´clock in the morning until whatever time it went dark. Nan would call me in for lunch that was always a bowl of tomato soup followed by a bowl of Ambrosia Creamed Rice Pudding, as I listened to a few overs of a Test match on the radio. Tea was usually spread cheese sandwiches and a couple of marshmallows.

The only things to stop play were rain, (though my memory says it never rained but perhaps we were just hardy enough to ignore a bit of drizzle) and a twice weekly delivery van bringing supplies to the corner shop that provided for the estate. There a weekly  slow journey up and down the streets by my uncle Horace, the local rag and bone man, sitting on his horse drawn cart. That would sometimes bring our games to a halt whilst we kicked aside the mess his horse would make. A daily inconvenience was my uncle Sid, wobbling home from work each day on his bike, trying to carry under one arm whatever tools or equipment he´d borrowed from his workplace that would enable him to improve the house and garden.

Now, in 2019, Angie Page, Professor Of Physical Activity And Public Health at Bristol University, suggests that time spent playing outdoors leads to increased physical exercise and a reduction in obesity. My Nan and ´unc´ weren´t professors, but as I recall, I think they knew that, leaving aside the not so small matter of marshmallows for tea !

The government, of course, has now issued a decree to local authorities across the UK that they should designate street areas that can be employed for play. All this, they suggest, will improve childrens´ personal skills and improve social cohesion.

I don´t doubt the merits of the plan, but I am reminded of a song that my group Lendanear recorded on our first album in the nineteen seventies. Even then the concept of playing in the street had been slowly killed off by tv in the living room and too many cars on the road.

So when Colin Lever and I wrote Cup Finals Every Night in 1976, the scenes it described already carried a glow of nostalgia for an era long gone.

Now this plan is being unveiled at the same time as we have just re-issued the song on a re-mastered version of the album Moonbeam Dancing, the cover of the original of which showed a football resting beneath a lit street light, waiting to be used again come daylight in tomorrow´s match.

The lyrics might make interesting reading, as they not only remind us of what were the halcyon days of my sixty-something generation but also illustrate how art reflects life. Maybe the time has finally come for this song that we performed, (not well enough, obviously) at our audition for Opportunity Knocks. The words reproduced at the foot of this post might help you decide whether or not Hughie Green should have given Lendanear, and our poetry set to music, the chance to become a ´national treasure´ in the way the Pam Ayres later did !

Whatever its merits or lack thereof, the song continually reminds me of my childhood days playing in the streets, pretending to be nat Lofthouse, the Bolton Wanderers And England centre forward, or ¨fiery Fred´, the Yorkshire and England fast bowling cricketing legend. You may recall that we referenced Lofthouse in a recent post about Tiny Tommy Trotter And The Mountain Of Debt that looks like it is about to tumble down on the club and bury it in un-consecrated ground outside the football league. Now, this recollection of Fred Truman reminds that his is perhaps the most impressive sculpted tribute I have seen. It stands by the canal side at Skipton, and up until coming here four years ago my wife and I were still spending romantic Friday evenings, eating fish and chips and scallops from Bizzie Lizzies with a can of fizzy pop, in the shadow cast by the statue of Fred hurtling in to bowl. I´m a ´Yokshaman´ and I know how to treat a Yorkshire lass! A scenic car ride, and then a chat about sports and culture as we tuck into a nice fish supper, eaten out of the newspaper, and take conversational Sidetracks And Detours all across the arts.

We were ragamuffin boys,

we were good for nothing boys,

And lampposts, they were Wembley´s brightest floodlights.

We were stars with twinkling feet,

there at Wembley in a cobbled street

playing our cup finals every night.

We were ragamuffin boys

and they called us good  for nothing boys.

behind the bike shed, sharing drags

until come the bell at four o´clock

and forget your homework, skip your tea,

and straight out to play for Wanderers FC.

but I was always last one picked it seemed

even though there´d perhaps be fifteen kids each side

And first team to score ten would bring half time.

Then later, when the match was really tensely poised

out came old Granny Hick, ´what´s all this noise?¨

Then, with the score at nineteen all,

she´d beggar off, and take the ball.

But have you seen today´s ragamuffin boys,

drinking and stomping and making lots of noise,

spitting and cursing and swearing aloud

We thought we´d given them enough

but the reason England can´t find a new goalscoring star?

Too few streets and too many cars.

FESTIVALS AND FOLK LORE FOR ALL