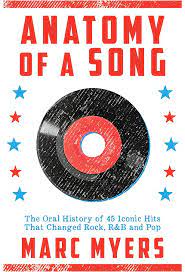 Songs that sell the most copies become hits, but some of those hits become something more: iconic recordings that not only inspire a generation but also change the direction of music. In Anatomy of 55 More Songs, based on his column for the Wall Street Journal, music journalist and historian Marc Myers tells the story behind fifty-five rock, pop, R&B, country, and soul-gospel hits through intimate interviews with the artists who wrote and recorded them. Part oral history, part musical analysis, Anatomy of 55 More Songs ranges from Creedence Clearwater Revival’s Bad Moon Rising to Dionne Warwick’s Walk On By, The Beach Boys’ Good Vibrations, and Black Sabbath’s  Paranoid.

bt Bernie Taupin recalls how he wrote the lyrics to Elton John’s Rocket Man; Joan Jett remembers channeling her rage against how she had been unfairly labeled and treated as a female rocker into Bad Reputation; and Ozzy Osbourne, Elvis Costello, Bob Weir, Sheryl Crow, Alice Cooper, Roberta Flack, John Mellencamp, Keith Richards, Carly Simon, and many others reveal the emotions and technique behind their major works. Through an absorbing chronological, song-by-song analysis of the most memorable post-war hits, Anatomy of 55 More Songs provides a sweeping look at the evolution of pop music between 1964 and today.

Unless it is recorded by its writer, who would probably need to be an established singer-writer of the quality of someone like Paul Simon or Ed Sheering, nobody seems to take too much of notice of the lyricists and melodists who create most of the soundtracks of our lives. Generally, today, such writers are well rewarded in royalty terms if their song becomes a smash hit but the general public don´t often investigate the songs they put into chart but settle instead for the fact that it has rhyming easy te remember lines and that it´s tune passes the old grey whistle test. That phrase, the old grey whistle test, derived from a Tin Pan Alley and refers to the fact that whenever a new record was pressed up, it would be played to doormen. They were known as Old Greys, because they wore grey suits. If they could remember a song after one or two plays and whistle the tune, then the record was said to have passed The Old Grey Whistle Test

This book will change how you listen to music and evaluate the artists who create it.

Marc Myers is a regular contributor to the Wall Street Journal, where he writes about music and the arts. He is the author of the critically acclaimed books Anatomy of a Song, Why Jazz Happened, and Rock Concert, and posts daily at JazzWax.com, a three-time winner of the Jazz Journalists Association’s award for Jazz Blog of the Year.

“In these pieces…songwriters and performers speak in their own voices…Because of Myers’s skill as an interviewer, their pride and enthusiasm come blasting through. Each story is a pleasure to read and will deepen your listening experience…Myers bears down hard on these songs and the artists rise to the standards he sets.”

A first-rate playlist…A rich history of both the music industry and the babyboomer era.  Los Angeles Times Book Review

Marc Myers’s Anatomy of a Song [is] a winning look at the stories behind 45 pop, punk, folk, soul and country classics…A smart, gracious book. His interviews yield some fascinating details. [A] splendid volume. Guardian

Who would’ve ever guessed the inspiration behind Gladys Knight’s soul-stirring Midnight Train to Georgia was ’70s pinup queen Farrah Fawcett? That’s just one of the fascinating song histories revealed in the new book Anatomy of a Song, New York Post”

The short, sharp chapters breeze by like a particularly well-curated jukebox…Fast, fun and informative. Houston Press

The most revealing and entertainingcompilation of short stories on popular music we have seen this decade. Goldmine

Anatomy of A Song gets the lowdown on about forty years of hits straight from the artists’ mouths. It’s always cool to hear how the musical sausage gets made, especially when it’s made by geniuses in the field. But Myers also does an outstanding job of unearthing the moments of humour and heartbreak that accompanied the creation of these songs. American Songwriter

Myers uncovers the fascinating backstories behind many legendary songs that changed the trajectory of music . . . Culling together anecdotal revelations about happy accidents, deliberately vague lyrical choices and unexpected lapses of confidence, The book manages to both demystify and humanize so many of its iconic subjects…Filled with surprises for music fans and aspiring songwriters alike. BMI Music

Who doesn’t like to listen to musicians tell their stories about the genesis of a song? Or to hear them laugh at the deep meaning that listeners often invest in it when for them it was, well, just a song about a breakup? Myers’ book has something for everyone No Depression

The critical ability of Marc Myers shows in his selection of topics and his persistence in hunting down the right people to talk about their songs. But his talent as a writer shows in his willingness to get out of the way and let them talk about their songs ..Myers pushes his subjects to recollect what had really happened that day in the studio, that moment when the song first came to mind, that instant when the radio began to play it. Washington Free Beacon

Myers’ book succeeds as a collection because he reveals the paradox of popular music: the magical change that transpires once the personal becomes public . . . Perhaps the greatest gift of Anatomy of a Song is its range . . . This is a book that encourages you to go back into your record collection, to the hits you think you remember well. Las Vegas Weekly

Myers’ work is archival. It is important. It is illuminating. Under the Radar

A detailed look at 45 iconic popular songs . . . This will entice general readers and music lovers alike. In his introduction, Myers calls the book an ‘oral history jukebox’ and popular-music fans everywhere will want to be ready with a pocketful of dimes.  Booklist

A compelling compendium of behind-the-scenes shop talk that will excite even the most casual music geek.Bookreporter

WRITTEN FOR OTHERS by Paul Simon