Blog
You are here: Home1 / Blog2 / Music3 / WRITTEN FOR OTHERS by Paul Simon 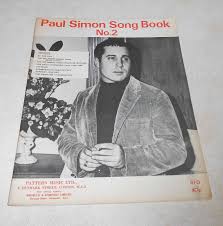 WRITTEN FOR OTHERS by Paul Simon

All my favourite writers about the Americana music I love and those who write about the writers that created the genre hang out at places like American Songwriter magazine and Paste on-lin. They are so good, so objective, so thoughtful and so damned eloquent that, rather than paraphrase and thus diminish them, I can only name them and signpost the sidetracks and detours you take to reach them.

One such writer is Tine Benitez Eves, who is a freelance and editor and serves as an excellent staff writer at American Songwriter, where she has recently written a piece that reminded me that even very early in his career Paul Simon was writing songs for others.

By the mid-1950s, a teenage Paul Simon (born Oct. 13, 1941) had already started performing with his childhood friend, Art Garfunkel. The duo would release their 1964 debut, Wednesday Morning, 3 A.M., (right) before their back-to-back breakthrough albums, Sounds of Silence and Parsley, Sage, Rosemary and Thyme in 1966.

Simon and Garfunkel would record five albums together, and contribute several songs to the soundtrack of the 1968 film The Graduate, before disbanding in 1970. Throughout their run together, Simon penned the duo’s entire catalogue including classic hits like Bridge Over Troubled Water, Mrs. Robinson, America, and The Boxer among many others.

In 1972, Simon would release his self-titled solo album with hits “Me and Julio Down by the Schoolyard,” “Mother and Child Reunion” and more than a dozen albums to follow, including In the Blue Light (left) in 2018.

A 12-time Grammy winner, including a Lifetime Achievement Award, Simon was recently honored on the televised Homeward Bound: A Grammy Salute to the Songs of Paul Simon concert on Dec. 21, 2022, which included performances by Stevie Wonder, Sting, Brad Paisley, Garth Brooks and Trisha Yearwood, Rhiannon Giddens (right), Eric Church, The Bangles’ Susanna Hoffs, and the Jonas Brothers, among many others.

“I don’t see large themes that span my songwriting career unless it’s the story of my life,” said Simon in a 2011 interview with American Songwriter. “There are the usual song subjects: love songs, family, social commentary, etc. And, of course, the changing perspective of aging. I think you could look at my work as divided into three distinct periods: Simon and Garfunkel, pre-‘Graceland’ solo albums, and ‘Graceland’ to the present.”

Of the song-writing process, Simon added “I spend more time writing music than writing words. The music always precedes the words. The words often come from the sound of the music and eventually evolve into coherent thoughts—or incoherent thoughts. Rhythm plays a crucial part in the lyric-making as well. It’s like a puzzle to find the right words to express what the music is saying.”

Adding to the catalogue of songs he wrote with Simon and Garfunkel and his solo catalogue, from his 1965 debut, The Paul Simon Songbook, post-Simon and Garfunkel to the present, there were a handful of songs that Simon wrote for other artists, some of which were also recorded later on by the folk duo.

Here are five songs Simon wrote or co-wrote for other artists, including several that were recorded by outside acts first before being released by Simon and Garfunkel.

Originally written by Simon for his 1965 album, The Paul Simon Songbook, singer Dorris Henderson (left) recorded and released a stirring rendition of “Leaves That Are Green” several months earlier on her album, There You Go, with John Renbourn.

“Leaves That Are Green” was also recorded with more instrumentation for Simon and Garfunkel’s 1966 album, Sounds of Silence, and was also the B-Side to their hit “Homeward Bound,” off their follow-up album, Parsley, Sage, Rosemary and Thyme.

I was twenty-one years when I wrote this song
I’m twenty-two now, but I won’t be for long
Time hurries on
And the leaves that are green turn to brown
And they wither with the wind
And they crumble in your hand

Once my heart was filled with the love of a girl
I held her close, but she faded in the night
Like a poem I meant to write
And the leaves that are green turn to brown
And they wither with the wind
And they crumble in your hand

Off Simon and Garfunkel’s Parsley, Sage, Rosemary and Thyme, the second of two groundbreaking albums for the duo in 1966, “Homeward Bound” was first recorded by the British duo Chad & Jeremy, made up of the late Chad Stuart and Downton Abbey actor, Jeremy Clyde, in 1965. Simon wrote the lyric while waiting on the platform for a train at Widnes station near Liverpool, England to take him back to London to his girlfriend. Released by the duo in 1966, the song became a hit for Simon and Garfunkel, reaching No. 5 on the Billboard Hot 100.

Over the decades, the classic track has been covered more than 130 times by everyone from Willie Nelson, Glen Campbell, Cher, Harry Belafonte, and even as a duet between Simon and George Harrison in 1990. Art Garfunkel also released a live version of the song on his 1996 album Across America.

Off of Australian folk-rock group The Seekers’ fifth album, Come The Day (left), “I Wish You Could Be Here” was written by Simon and the band’s guitarist Bruce Woodley. The album, which also features a cover of The Beatles‘ 1965 hit “Yesterday,” went to No. 2 on the Billboard 200 chart.

Woodley (right) would continue to collaborate with Simon and also co-wrote the track “Cloudy,” off Simon and Garfunkel’s Parsley, Sage, Rosemary, and Thyme. Coincidentally, The Cyrkle also released a cover of “Cloudy” on their 1966 debut album, Red Rubber Ball—the title track was also co-written by Simon and Woodley.

Lookin’ from my window on the freshly fallen snow
It sparkles as it tumbles upon the street below
The crackle of the fire is laughing in my ear
The room is warm and sleepy, and I wish you could be here
Some days in this town there’s not a lot for me to do
I’ve been listening to some records, and my thoughts return to you
I tried to read the paper, but the words aren’t very clear
Oh, I know there’s something missing, and I wish you could be here

Paul Simon offered the song “Red Rubber Ball” to the ’60s rock band The Cyrkle while they were on tour opening for Simon and Garfunkel. “Red Rubber Ball” went on to become the band’s most well-known song. Written by Simon and the band’s guitarist Bruce Woodley, the song hit No. 2 on the Billboard Hot 100 chart and sold more than one million copies.

“Red Rubber Ball”—which has been covered by Neil Diamond, Mel Tormé, Del Shannon, and even Simon and Garfunkel—tells the story of a man who remains hopeful after a failed romance comes to an end.

I should have known you’d bid me farewell
There’s a lesson to be learned from this and I learned it very well
Now I know you’re not the only starfish in the sea
If I never hear your name again, it’s all the same to me

And I think it’s gonna be all right
Yeah, the worst is over now
The mornin’ sun is shinin’ like a red rubber ball

please note logo The primary sources for this article have been various on line sites including Nonesuch music and Paste on-line and the print publication Maverick.

Recommended titles of books about Music and Musicians in our weekly feature, You´re Gonna Need A Bigger Bookshelf can be found on line at Powell´s City Of Books at

Today´s article was collated by Norman Warwick, a weekly columnist with Lanzarote Information and owner and editor of this daily blog at Sidetracks And Detours.

e mail logo The purpose of this daily not-for-profit blog is to deliver news, previews, interviews and reviews from all across the arts to die-hard fans and non- traditional audiences around the world. We are therefore always delighted to receive your own articles here at Sidetracks And Detours. So if you have a favourite artist, event, or venue that you would like to tell us more about just drop a Word document attachment to me at normanwarwick55@gmail.com with a couple of appropriate photographs in a zip folder if you wish. Beiung a not-for-profit organisation we unfortunately cannot pay you but we will always fully attribute any pieces we publish. You therefore might also. like to include a brief autobiography and photograph of yourself

in your submission. We look forward to hearing from you.