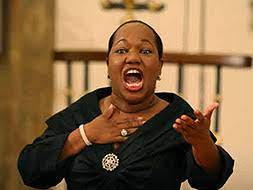 Stars Of Gospel (left) is not just a musical show, it is also an experience that leaves no one indifferent. Stars Of Gospel, has its roots in the best African-American musical traditions and represents a community culture where free expression and beauty go hand in hand. The soulful voices of the Stars of Gospel, with their perfect fusion of captivating harmonies and powerful rhythms, give their concerts a spiritual dimension where music becomes a metaphor for life, combining energy, enthusiasm and emotions. Bridget Bazile has been acclaimed in great theaters around the world and is recognized as one of the most eminent voices of her generation, both in the field of classical and Negro Spiritual. Her solo performances include gigs at Carnegie Hall in New York City, the Orchestra Hall in Chicago and the Lyon Sacred Music Festival in Lyon, France, as well as the John F. Kennedy Center For The Performing Arts and the World Symposium in Sydney, Australia.

With the release of her album “Sometimes I Feel…”, in December 2022 Bridget will celebrate her tenth European tour dedicated to promoting the African-American musical legacy.

A native of Metairie, Louisiana, Bridget Bazile (right) is a graduate of Tulane University and The University of New Orleans. Winner of the prestigious Leontyne Price Competition, Ms. Bazile was also awarded the second prize in the Metropolitan Opera National Council in 1999 and the first prize in the Meistersinger Vocal Competition in Graz, Austria in 2001. She has performed the lyrical roles of operas by Purcell, Puccini, Mozart, Handel, Verdi, and Gershwin

Her professional appearances include appearing as a lead soloist at Carnegie Hall, Orchestra Hall in Chicago, and the Lyon Sacred Music Festival in Lyon, France, the American Choral Director & National Convention at DAR Constitution Hall, the John F. Kennedy Center for the Performing Arts, New York at Alice Tully Hall, Sully Music Festival in Sully, France and the World Symposium in Sydney, Australia.

Ms. Bazile released an album entitled “Sometimes I Feel…”. And in January 2017, she completed her tenth year, multi-city solo performance tour across Spain and France. It is her mission to promote and keep alive the richly deep and unique musical heritage of African-American music and culture.

Ms. Bazile is acclaimed around the world and is recognized as one of the most eminent classical, gospel singers and spiritualists of this generation.

The drive up the island, across the Le Geria vineyards was glorious in the setting sun, painting a Picasso like red and pink abstract on a blue canvas, and we arrived in town with so much time to spare that our favourite pizza restaurant wasn´t yet open. We could have waited for the seven o´clock opening as the concert round the corner wasn´t due to start until 8.30 but rather than take Lanzarote time zones for granted we stepped into a very different kind of pizza bar, called Capi Blas

With its ice cream corner and lovingly made milk shakes as well as its pizza oven. this was full of workers on the way home picking up take – aways, and school-kids skipping homework and, instead, just hanging out for fun. A phone on the wall kept ringing and seemed to as often be a call from a parent seeking their young teenage children as a call to reserve tables or to place a delivery order.

I didn´t detect any great signs of National mourning despite Spain having missed three consecutive penalties and thui fall out of the world cup at the hands of Morrocco, earlier that afternoon.

Instead the place was buzzing, encouraged by a really friendly staff who seemed somewhat aghast at suddenly having English speaking customers to serve. Still we easily negotiated a table for two, ordered my Tropical and Dee´s Atono pizzas, made sure we would also have a glass of red wine and a beer with those and we ate the lovely thin freshly-made pizza whilst enjoying the Happy Days kind of atmosphere. I kept expecting The Fonz (left) to arrive at any minute.

That all beautifully killed an hour and a bit and we arrived at the theatre, beautifully lit, (right) and stepped inside to a whole other world.

What we heard was basically what I would have thought of as more or less my twenty-odd favourite gospel tracks of all time. And to make that even more special, those songs were delivered, soulfully, respectfully, reverently but with a sense of humour too and energetically without ever losing musicality.

Those songs included This Little Light Of Mine, one of the few covers my folk band Lendanear ever recorded (fifty years ago)  but we didn´t deliver it quite like this or with such urgency.

There was also Go Tell It On The Mountain, Jericho (walls came tumbling down) a gorgeous hymnal Amazing Grace, Gonna Lay Down My Burden (Down By The Riverside), a most moving version of I Am Sojourn, Rejoice, To Love You More, When The Saints Go Marching and Oh Happy Day.

We had songs that emanated from the cotton plantations in the eras of slavery and we had church gospel and touches of the blues.

There was a trio of three female backing singers, although three-part harmony choir might be a better description of these females each with a distinctive and identifiable voice who nevertheless sought only to complement Ms. Belize.

One of the singers Sabrina Quinnie (?) was brought to the front by Bridget to perform a song she had written that was subsequently included in a major film, and my wife says was called To Love Your More, and sung by Celine Dion?

Another of these singers was also brought to the front by Bridget to sing a duet with her, and her surprisingly beautiful but gravelly voice sat perfectly alongside the more operatic tones of Bridgit Bazile

Although the other trio member did not take a sole spot, she nevertheless gave a ´can´t take your eyes off her´ kind of performance, all a solo finger-clicking, hand-clapping, foot-stamping, tambourine shaking tour de force as she sang her heart out to The Lord.

In fact tour de force is a phrase that was appropriate from the very first number, This Little Light Of Mine, in which Bridgit, with a beautiful voice that soared to opera levels and at times fell to  a prayerful whisper, played constantly with the tempo, creating all sorts of dynamics.

Go Tell It On The Mountain, of course, was adapted to or from an American folk song but tonight it powerfully celebrated the fact that ´Jesus Christ Is Born´.

In praising her three part choir, Bridget suddenly hit on the idea that we, the audience, could also serve as a three part choir and together we all sang Rejoice with her, and made a pretty good fist of it.

Amazing Grace was a hymn Dee and I chose for our wedding in 1976. We were aware of it having been a hit for The Pipes & Drums & the Military Band of the Royal Scots Dragoon Guards, becoming he best-selling single of the year. The song spent nine weeks in the top 10 (including five weeks at number one), sold over 890,000 copies..

It is hard to find a person who hasn’t heard Amazing Grace. The well-known tune has been played at countless services worldwide, with many cover versions created and performed.

English poet and Anglican clergyman John Newton originally wrote the words in 1772, while the Christian hymn was official published in 1779.

The words relate to Newton’s personal life as someone who supported slave trading before finding himself in a situation where he needed God’s help, which gave him a new perspective on life leading him to write the words of Amazing Grace.

However, more than 20 melodies have been put to the famous lyrics over the last two centuries and, in 1835, a melody by the name of New Britain by American composer William Walker became the tune traditionally used to this day.

In 1922, The Original Sacred Harp Choir were the first to record Amazing Grace with the New Britain tune.

Moving forward to 1970, Judy Collins (left) recorded a version, which was also on the UK chart’s – for 67 weeks, the longest single by a female artist at the time, peaking at No.5.

Amazing Grace was Live Aid’s opening performance on the Philadelphia stage in 1985, sung by Joan Baez with over 100,000 people singing with her in unison.

To this day, Amazing Grace continues to be sung and re-invented.

It has never been better sung or better re-invented, though, than it was on this stage tonight in a stunning, emotional solo performance by Bridget Bazile. She held spellbound and silent an audience that had thus far been clapping and hollering and whooping all evening.

She brought the show to a close with two roaring audience-participation numbers in When The Saints Go Marching In and Oh Happy Day, that was such a big hit a few decades ago for The Edwin Hawkins Singers.

I have occasionally reported that ´people were dancing in the aisles´ at other concerts but that phrase needs to be altered here. Tonight the whole full-house audience was dancing in the aisles, So much so that Bridget stepped down off the stage to walk among them and conduct on the spot X factor like auditions as she listened to them before selecting two teenage looking girls to take back to the stage and join her trio. What a performance these two young women gave, singing out with confidence and receiving rapturous applause from the audience and warm congratulations from all the artists.

Yes, I know I said Bridget and her singers were accompanied by a pianist, and no I haven´t forgotten him.

I wanted to save a special mention for him here at the foot of this review that would include his name. Unfortunately his name is difficult to locate. I can´t find it on-line anywhere and although I know Bridget gave him a name check but it got lost amongst the audience calls to Praise The Lord or Save Me Jesus

I don´t know too much about piano styles but I´m sure I heard some boogie woogie, jazz fills, gospel sound and deep down blues. He inserted several impressive riffs without hindering the singing or presentation of the song and he clearly enjoyed himself, seeming to often serve as musical conductor as well. His was a major contribution to a show that will live long ion the memory of all those who saw it.