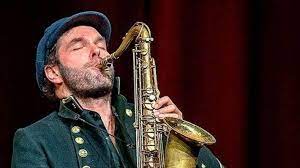 MUSIC OF THE ELEMENTS

Setting his tenor saxophone in an intriguing line-up of vibes, harp, bass, drums and percussion, says Rob Adams in a Jazz In Europe magazine review, has enabled jazz sax player Lucien Johnson to capture the dream-like quality he wanted to convey on his debut digital recording. It also harks back to playing with Ethiopian jazz pioneer Mulutu Astatke and the many musical experiences Johnson has enjoyed as a result of leaving New Zealand for Europe as a twenty-two-year-old. He bade farewell despite having no contacts and only a smattering of high school French.

´If you come from New Zealand, when you’re young anywhere else seems extremely exciting and desirable´, he says. ´I talked myself into an English teaching job in Paris and stayed with a friend of a friend for a few days, then was in some hostels before finding a flat in the 11th arrondissement. My French was really bad but after a year or so it got much better and before long I was fluent.´

As he started to meet people, Johnson (left) , who grew up in a musical family, was able to find work as a musician. He played in brasseries and gravitated towards theatre work, including a clown troupe, with whom he toured India. Another theatre gig took him to Haiti, where he spent four months, and contracted malaria, but also got to play with voodoo drummers.

´Playing and recording with a musician of Alan’s stature was a real honour for me,´ Lucien told Jazz In Europe, ´and meeting and gaining the respect of these American players who were of the sixties and seventies generation who had settled in Paris was amazing but it was often a struggle to pay the rent and after six years, I decided to return home´.

In Wellington he joined a band that toured the U.S. and Europe every year and got a taste of the rock ‘n’ roll lifestyle. He then completed a Doctor of Musical Arts degree at Victoria University and went on to compose music for the New Zealand Symphony Orchestra and the New Zealand Dance Company while making music under his own name. His album West Of The Sun (left), which was released on Japanese label Wonderful Noise, was shortlisted for New Zealand’s Jazz Album of the Year title in 2017.

Johnson’s travels and experiences led to him becoming the go-to musician for festival collaborations back home, which is how he came to work with pianist Marilyn Crispell and bassist Barre Phillips, and with Mulatu Astatke, both in Wellington and Addis Ababa.

photo 4 Wax/Wane, he says, is the first album he has made in a really mature musical style and he’d like to think it marks the beginning of being able to concentrate exclusively on making his own music.

´I definitely chose the harp and the vibraphone for a reason´, he confirmed to Rob Adams, ´For me, these instruments invoke, perhaps better than any other, the feeling of dreams. That’s why composers like Debussy and Ravel liked the harp. The vibraphone can do that too when you use it with pedal and tremolo. The vibes give Mulatu’s music a sense of mystery and one of my favourite Miles Davis albums, Blue Moods, gets this spacious, mysterious feeling with the vibes, as does Archie Shepp’s New Thing at Newport with Bobby Hutcherson´.

The Wax/Wane (right) instrumentation is one he would like to record with more and he feels there is ´much to explore in creating music that reflects the weather, of winds and storms contrasting with blue skies, and the flora and fauna of the coast where he lives.

Sidetracks And Detours know from our own dealings with jazz players, folk-lore musicians and even classical performers that they, too, work in pursuit of the elemental, sharing similar island conditions here on Lanzarote to those described by Lucien.

´It’s a very different experience from, say, living in New York and going head-to-head with jazz virtuosos every night of the week´, Lucien says. ´My music probably doesn’t have the same technical complexity as a lot of the music that is made in that context, but I do believe it has a certain level of emotional nuance nonetheless, and a feeling of mystique´.

London Jazz News has said of Wax///Wane as music that it is ´a subtly enigmatic experience – as if we need to discover more, or have vaguely been here in our long-lost youth, but the spectacle is observed through a veil and not quite tangible´.

John Fenton, writing for Jazz Local, described Wax / Wane as ´music defying the mundane, an invitation to a better place where gravity is abandoned´.

According to Wax///Wane — Lucien Johnson / Composer / Saxophonist Wax///Wane is a new album by Lucien Johnson made up of six compositions about the moon and other wonders. It features an intriguing ensemble: John Bell on vibraphone and Michelle Velvin on harp create shimmering, impressionistic landscapes while the towering rhythm section of Tom Callwood on double bass, Cory Champion on drums and Riki Piripi on percussion provide gravity through their smouldering grooves. Johnson’s saxophone, described by Jazz in Paris as “lyrical as Coltrane, as powerful as Rollins”, soars above the ensemble, bringing mystique and aura to these unique pieces, themselves a study in light and shade.

SOUNDS FROM THE RIBBLE VALLEY

This new all star group explores Mark’s multi-faceted outlook on music through a new set of original compositions with this bold and unique sounding group. Urgent and exciting grooves and textures all cleverly crafted together within Lockheart’s unique and memorable melodies. Wide ranging influences from Ellington and Shorter to John Zorn, the Beatles and even Kraftwerk!

“From Loose Tubes to Polar Bear and beyond, Lockheart’s capacity to be ahead of the jazz curve is undeniable. In this new band his combination of lyrical economy and harmonic creativity has found three improvisatory soulmates who clearly know how to make the most of his compositions in their own terms.” Jazzwise magazine

Since the band was formed in the late nineties, Willy Fluss and Vernon Fuller have been regularly featured in many Jazz and Blues festivals throughout the Country, they have also supported the likes of soul legend Geno Washington, the Royal Liverpool Philharmonic Orchestra, and the Northern Chamber Orchestra in many high-profile concerts.

Vernon Fuller started his performing career in his native London on the funk, R&B, and reggae scene. Influenced by George Benson, Stevie Wonder, Al Jarreau, and Bob Marley his vocal style has a natural warmth, rhythmic flexibility and richness which has delighted audiences throughout the country.

Vernon is also an outstanding guitarist, at ease with the great American jazz guitar tradition as well as the more contemporary funk, reggae, and world styles.

The unique guitar and vocal style of Vernon is perfectly complimented by the dynamic playing of Italian guitarist Willy Fluss, who appoints as his main influences John Scofield, Mike Stern and Wes Montgomery.

Twin Frets music takes audiences through an exciting journey from jazz standards to soul classics with occasional touches of reggae and township music, a dash of scatting and beat boxing, and a lot of great guitar playing.

… SINGING TWO SONGS FOR US,  WE HAVE…