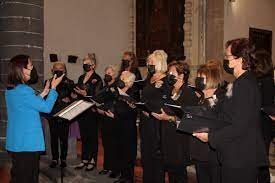 It was great to see La Voz recently carrying news of the Yaiza Choir, and telling of

Voz noted that ´With the reading of the proclamation by the Yaiza Choir, which turns 25 this year, the festivities in honour of Our Lady of Los Remedios officially began.

The event was held in the assembly hall of the Casa de la Cultura Benito Pérez Armas, a venue that is getting smaller and smaller for all the people who want to attend the main act of the celebrations. The Yaiza Choir kicked off the event by performing two songs, Si Buenos Aíres no fue asi and Un sarao de la Chacona.

Subsequently, Nuvi Tavio,, (left) director of the choir, was in charge of reading the proclamation in which she highlighted some of the many moments lived during the 25 years.

The Yaiza Choir was created in 1997, at the proposal of the Department of Culture, to bring this modality of singing closer to the new generations. Choral singing in Yaiza began in the 1950s with the Choir of the Parroquia de Nuestra Señora de Los Remedios which, in that period, accompanied with its voices the various religious celebrations that took place throughout the year, such as the Sunday Mass, Holy Week, and festivals such as Los Remedios, etc.

Nuvi explained that “for our Choir it has always been a privilege to be able to hold our “Choral Encounters” and “Christmas Concerts” in the Yaiza church. ” And we also want to thank you for the opportunity it gives us every September 8 when, with our songs we accompany the Mass in honour of Our Lady of Los Remedios”.

“This year, in addition, we have expanded our participation as a result of the “First Musical Meeting”, which took place in the church of Yaiza, at the initiative of the parish priest Jonathan Almeida, prior to Holy Week, which has been very well received by both those attending the event as well as the participants”, continued the director.

She also explained that “singing is part of a universal language that has been practiced by all cultures throughout history and has modelled with its sounds and harmonies the expression of our emotions and deepest experiences. According to neuroscience. through singing we put into operation areas of our brain that provide us with greater well-being. In fact sining is considered a great generator of benefits for our physical and mental health. Its practice in a group is recommended for people of all ages since the interaction of the group, through the breathing, the melody and the rhythm of the voices, bring us closer to emotions related to joy, optimism and happiness”.

Nuvi (right) also had words to remember the Covid, “our Coral celebrates this year, 25 years of its activity, its silver anniversary of a whole career. This has been a long road, full of happy moments, in which we have been able to adapt to the changes and new situations. In March 2020, under the uncertainty of Covid, we had to close the doors of our rehearsal room. But a few weeks later, our desire to continue working, learning and meeting (even if it was virtually), did not change. Thus began a new journey for the Choir, our rehearsals were carried out from an online platform and, in this way, we have continued with our activity until today that we have returned again to our beloved venue.

We are here to pay tribute to all the colleagues who have been part of this Vocal Group of Yaiza and in a very special way to those who are no longer with us. During these years we have participated in the different event held in Lanzarote by other groups, also taking our songs to residences and hospitals at Christmas time to bring joy to our elders”,

The Musical Director ended the proclamation by wishing everyone to enjoy the scheduled acts, dismissing this proclamation with some lines that were composed by a member of the Yaiza Parish Choir to the Virgen de los Remedios.

we sing for you with peace and hope.

We come to your side, beloved little Virgin.

let your grace be our abode.

Your people venerate you, ask you with longing.

that you guide our steps in our walk.

from the garden of heaven, the most beautiful flower.

Your Kingdom is justice, truth and love.

Your kingdom is in us, within the heart.

Virgin of Los Remedios, Mother of the Lord,

of the people of Yaiza, our salvation.

The director was accompanied at the presidential table by the parish priest of Yaiza, Jonathan José Almeida, the Mayor of the Yaiza town hall, Óscar Noda and the councillor for Fiestas, Javier Camacho, and in the assembly hall the municipal councilors, the president of the Cabildo of Lanzarote, María Dolores Corujo and more civil and military authorities.

The event closed with the song to the Virgin of Los Remedios.´

The last time we heard the choir sing was in the town hall square outside the church in Playa Blanca (left) at an open-air mass to celebrate anther religious event on the island.in July.

We look forward to the next twenty five years.

Paul Salveson has appeared on these pages both in major features and in despatches from from our arts and culture correspondent, Michael Higgins.

Now we hear from the author himself of news his latest book .Copies of ‘Last Train from Blackstock Junction’ (right) have just arrived – looks really good. 12 stories about life on the railways, 1900 to 2022. Mostly set around Lancashire and Yorkshire. Launches at Elsecar (Sept 13), Bolton (Sept 21) and Carnforth (Sept. 28). Available price £12.95 plus postage from Platform 5 Publishing (discount if you subscribe to ‘Today’s Railways’). www.platform5.com. Many thanks to Sir Peter Hendy for his excellent foreword.

At 5.00 pm tonight on Monday 5th September Monster Radio on 99.9 fm will broadcast another edition of The Perfect Storm presented by AJ the DJ Hendrie. This excellent music magazine programme features an interesting interviewee each week with accompanying music chosen by the guest. We have reported on some of Aileen´s recent shows, including my own interview by her, and her excellent interview with accordion player Sharon Shannon at a very special concert here on the island. Those interviews are still available on the Monster Radio Archives and although the name of this week´s guest hasn´t yet been posted as we go press, the show is bound to be worth hearing.

Radio broadcastiong can be a lonesome occupation. and each presenter deals with the isolation of speaking intoi a microphoiner in studio in a different way. AJ for instance talks (and talkks and talksacross the airwaves, asking questions, having a laugh and conducting serious imaginary conversations with her listeners. She is irrepressibly out-goiung and upbeat.

There is room on the air-waves, though, for all kinds of presenters, and Steve Bewick is of a quieter, more contemplative nature.His style is more of inviting you into a small-ish lkiving room that opens out, Tardis like, into the local jazz scene and then further out into jazz events from all over the world, at varying times in jazz history, and then musically sails out into a distant universe. .

Nevertheless, both AJ and Steve obviously make contact with their respective audiences, and two communications are established..

For instance, The Bald Jazz Band (right) also added the adjoined leaflet (right) to Steve´s fb timeline, about a concert that took place over this past wee of future gigskend, apparently. If they would like to send publicity material to us, too, at Sidetracks And Detours, addressed to normanwarwick55@gmail.com, we´d be happy to post them on thesed pages too.

Meanwhile, though, I think the Bald jazz guys have got it covered !

photo bewick Michael wrote, Thanks for the mention Steve Bewick. Great listening as always and a superb selection. Listen in to Steve’s weekly shows and subscribe.

The current Hot Biscuits jazz sessions presented by Steve Bewick, a regular contributor to Sidetracks And Detours, features a live session from Linda Jennings Quartet at Creative Space, Manchester. A lively set well worth a listen to. Also included is music from Hugh Masekela, Greg Porter on a reworking of Natural Blues, Wolfgang Lackerschmid with Chet Baker and a contrasting recent solo piece. A helpful selection from Michael Hughes. Mátyás Gayer Trio from the mean streets of Hungary. Tuba Skinny with a 9 piece from NO. Last but not least is Renzo Arbore Facebook Fan Club sent by Luciano Severini. If this sounds interesting then pass on the work and listen in 24/07 at