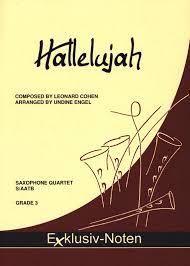 Jacob Uitti (left) opened a recent piece for American Songwriter by asking ´Lyrically, is there a more beautiful song than Hallelujah?  That can surely have been posed secure in the knowledge that its answer is a given. (isn´t it?)

photo 2 Reminding us that Hallelujah was written by the Canadian-born poet-songwriter and-performer Leonard Cohen and first released on his 1984 album Various Positions, Mr. Uitti assured us that the song has earned global significance, but said we should be mindful that such renown has been earned not for a single reason but for many. The story of the song’s fame and impact has as much to do with Cohen as it does with several other notable musicians and performers, including (at least)  John Cale (right) Jeff Buckley, and Rufus Wainwright.

Of course, it’s important to start the conversation about Hallelujah with its lyrics. Cohen, who is considered one of music’s greatest poets, often wrote expertly and exquisitely about the human condition, about love and sadness and remorse and hope, and all those are present in this track.. It’s because of these themes that the song has since become timeless.

I would argue that is the elusiveness of the lyrics and the fact that cannot the sense of certainty that lies (if certainty can lie?) in the dictionary definition of the word Hallelujah. In fact, it seems to me that Cohen was questioning that certitude.

Years after its initial release, Hallelujah was covered prominently by John Cale, Buckley (left), Wainwright, and more and after Cohen’s death in November 2016, the song experienced another resurgence. His passing, at 82 years old, marked the first time “Hallelujah” appeared in the Billboard Hot 100 song charts.

The song was originally written by Cohen in 12/8 time, which recalls gospel music and, as such, early rock and roll songs. Cohen wrote the track in C-major and its chord progression—C, F, G, A-minor, F—match the meta-lyrics in the tune. Namely, “Goes like this, the fourth, the fifth, the minor fall, the major lift.”

Like some other notable hits of the past, including Bob Dylan’s Like a Rolling Stone, Cohen wrote dozens of stanzas for the song before landing on the final version. He wrote something like 80 drafts of the song. It’s even rumoured that during one writing session at the Royalton Hotel in New York, Cohen was reduced to sitting on the floor in his underwear and banging his head on the floor.

The song, which includes several obvious Biblical references, utilizes the single word, Hallelujah, as its chorus. It’s exultant but it’s also a song about the dark side of humanity and of our most cherished trait: love. Love, though desired and cherished, is not always blissful. As Cohen writes, It’s a cold and it’s a broken hallelujah

Cohen references the stories of Samson and Delilah from the Book of Judges, singing, She cut your hair. He also talks about King David and Bathsheba:

Now I heard there was a secret chord

that David played and it pleased the Lord

You saw her bathing on the roof,

her beauty and the moonlight overthrew you

Well, maybe there’s a God above
As for me all I’ve ever learned from love
Is how to shoot somebody who outdrew you
But it’s not a crime that you’re here tonight
It’s not some pilgrim who claims to have seen the Light
No, it’s a cold and it’s a very broken Hallelujah

Often, he’s saying, when in a relationship, it can feel more like a competition, to win instead of to appreciate. This stanza warns against this common behaviour in people. Do better, Cohen seems to say, even when it’s hard, dark, and cold.

Reportedly, following the song’s release in 1984, Cohen took it on the road and sang it for fans during his live shows. These performances, however, often contained more or different lyrics. Presumably, Cohen was working out the song live, like many artists tend to do, before ultimately landing on the final version, even though there was already a version on record.

Perhaps above all else, this shows that even the most perfect songs are up to human, creative and artistic interpretation, by musicians and their audiences. A graph measuring a song´s qualities would surely include quotas for the way in which it is received?.

To date, there are more than 300 significant  known versions of the song, with likely thousands more done by hobbyist musicians and local bands.( in Uk folk clubs from Aberdeen to Yeovil !)

Bob Dylan was one of the first to perform Cohen’s song in concert. Since then, artists like Brandi Carlile, Regina Spektor, Willie Nelson, Pentatonix, Bono, Bon Jovi, and many more have performed the track. And Chester Bennington sang it for Chris Cornell’s funeral.

But the few that everyone knows are done by Wainwright, Cale, Buckley, and singer k.d. lang. Each performer puts their own spin on the tune, providing a sense of ultimate forlorn, hope, joy, or curiosity.

Cale was the first to record a cover version, doing so in 1991 on his album I’m Your Fan, a Cohen tribute album. His rendition offers more melody and musicality than Cohen’s signature drier version does. It also gives off a rock and roll feel.

Cale’s 1991 version incorporated lyrics that Cohen had only performed live. Cale had seen Cohen sing the song live and asked him for examples of the original drafts. Cohen reportedly faxed Cale 15 pages of lyrics and Cale says that he “went through and just picked out the cheeky verses.”

Piggybacking off of that, Buckley took the torch and added his drippy, delicate vocals to the song. This, perhaps more than any other, has become the most popular version (though it wasn’t an immediate hit and Buckley died in 1997 before it became one). Buckley’s recording has more than a hundred million views on YouTube, alone. It appeared on his seminal 1994 album, Grace.

For her part, kd lang (right) has said that the song, for her, is about “the struggle between having human desire and searching for spiritual wisdom. It’s being caught between those two places.” And former Barenaked Ladies frontman Steven Page, who sang the track at Canadian politician Jack Layton’s funeral, said the song is “about disappointing [other] people.”

Wainwright’s version (left) brought the track to another level. He recorded it for the 2x-platinum soundtrack to the popular movie Shrek (though Cale’s version appears in the movie).

In a 2009 interview with CBC Radio, Cohen himself talked about the number of covers of the song. He said he found their vastness “ironic and amusing,” given that his record label at the time refused to release the song when he’d first written it.

Cohen said, “I was just reading a review of a movie called Watchmen that uses it and the reviewer said, ‘Can we please have a moratorium on “Hallelujah” in movies and television shows?’ And I kind of feel the same way… I think it’s a good song, but I think too many people sing it.”

But Cohen seemed to contradict himself, saying in 2012 while promoting his album, Old Ideas— “There’s been a couple of times when other people have said can we have a moratorium please on ‘Hallelujah’? Must we have it at the end of every single drama and every single Idol? And once or twice I’ve felt maybe I should lend my voice to silencing it but on second thought no, I’m very happy that it’s being sung.”

GONE FISHING instead of just a-wishing