Blog
You are here: Home1 / Blog2 / culture and tradition3 / GONE FISHING instead of just a-wishing 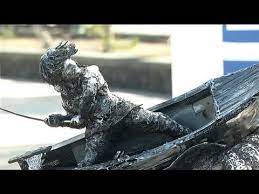 GONE FISHING instead of just a-wishing

We were driving around a roundabout in the San Gines area out near the new Marina in Arrecife recently, that we have driven round a hundred times before and therefore, perhaps took the roundabout for granted, Because of that I hadn´t noticed anything until, suddenly, causing a forceful, torrential downpour of sea-water, well no, that´s an exaggeration even by my standards, what I mean is my wife asked if I had noticed the impressive new statue on the roundabout.

Within the hour we had learned from our copy of Lancelot Spring edition 2022 what the statue, (sculpture is perhaps a better word), no, what the installation represents. Not only did the article tell us that but it also included a full colour photograph to show me what I had missed.

The city of Arrecife has recently premierred this new sculptural group, “Pescador con marlín”, (left) by the Lanzarote artist Jorge Isaac Medina. The mayor, Ástrid Pérez, presided over the opening ceremony, with the unveiling of the plaque that gives its name to the work.

The event was also attended by a large representation of civil and military society on the island, as well as members of the municipal corporation and other local administrations, who gathered at the place where the sculpture is installed, at the roundabout between the Charco de San Ginés and the entrance to the Marina de Arrecife marina.

Astrid Pérez, Mayor of the island´s capital city Arrecife (right) , thanked the presence of all the guests and “the genius of the artist Jorge Isaac Medina and the beauty of the sculpture”. “The city of Arrecife, its neighbours and visitors, can enjoy the pleasure of contemplating what could well be a frozen moment of our seafaring past, of that ancient and endearing relationship with the sea and the sea,” she said.

This large-format sculptural ensemble reaches seven meters in height, is made of iron and steel on a concrete base, and is made up of the fisherman, in his boat, face to face with the marlin and between the waves, ´which gives the whole work a great static beauty´. .

In her address at the opening ceremony (left) Astrid Perez noted that the sculpture represents ´a character of our common history, whose life was so similar to that of so many men from the Canary Islands, accustomed to not turning their backs on the sea´, , referencing Gregorio Fuentes Betancort who sneaks into the novel The Old Man And The Sea. ´Born in Arrecife and an emigrant in Cuba, with an adventurous heart´, said the mayor in her speech, ´he managed to ascend to the Olympus of the characters of universal literature thanks to the pen of the American writer and Nobel Prize, Ernest Hemingway´.

The sculptor, Jorge Isaac Medina,, had words of gratitude for the City Council of Arrecife and its mayor for the trust in the project and the facilities to carry out the work, and also for his wife and his team, and highlighted that ´Fisherman con marlín is the recreation of an authentic duel of the titans ´holding the viewer immersed in the scene enjoying the work from different points of view as if in the middle of the ocean´.

The model of what this sculptural group was going to be was presented in July of last year, since when the artist has been shaping the work in his workshop, until last January the installation began in its current location with some of the pieces of the artistic ensemble, such as the waves and the base of the sculpture, being made in situ.

Like Lancelot Spring Edition 2022, Lanzarote Gazette life, itself an excellent monthly island life-style publication, have also reported on the status of the installation, saying,

The Fisherman with Marlin by Jorge Isaac Medina represents a scene from The Old Man and the Sea, Ernest Hemingway’s classic novel of a duel between a fisherman and a huge marlin.

The protagonist of Hemingway’s novel, Santiago, is believed to have been based on Gregorio Fuentes, who Hemingway contracted as a skipper and who became his companion on his several voyages around Cuba.

Gregorio Fuentes (left) was born by the Charco de San Ginés in the fishing barrio of Valterra, Arrecife, but left the island at the age of six with his father, who was looking for better prospects in Cuba. On the journey to the Caribbean his father died, and the boy had to live off charity when he arrived.

The sculpture can be found is an impressive 7 metres tall, made from iron and steel with a concrete base. You can find the sculpture on the roundabout between the Charco and Lanzarote Marina.

The short heroic novel The Old Man And The Sea, by Ernest Hemingway was published in 1952 and awarded the 1953 Pulitzer Prize for fiction. Telling the story of an aging fisherman who engages in an epic battle to catch a giant marlin, it was the  author´s  last major work of fiction.

The central character is an old Cuban fisherman named Santiago, who has not caught a fish for 84 days. The family of his apprentice, Manolin, has forced the boy to leave the old fisherman, though Manolin continues to support him with food and bait. Santiago is a mentor to the boy, who cherishes the old man and the life lessons he imparts. Convinced that his luck must change, Santiago takes his skiff far out into the deep waters of the Gulf Stream, where he soon hooks a giant marlin.

A Marlin (left) are fish from the family Istiophoridae, which includes about 10 species. A marlin has an elongated body, a spear-like snout or bill, and a long, rigid dorsal fin which extends forward to form a crest. Its common name is thought to derive from its resemblance to a sailor’s marlinspike. Marlins are among the fastest marine swimmers, reaching ~110 km/h (68 mph) in short bursts. However, greatly exaggerated speeds are often claimed in popular literature, based on unreliable or outdated reports.[2]

Marlin fishing today is considered by some game fishermen to be a pinnacle of offshore game fishing, due to the size and power of the four marlin species and their relative rareness.

Hemingway tells how the old man, with all his great experience and strength, struggles with the fish for three days, admiring its strength, dignity, and faithfulness to its identity; its destiny is as true as Santiago’s as a fisherman. He finally reels the marlin in and lashes it to his boat.

However, Santiago’s exhausting effort goes for naught. Sharks are drawn to the tethered marlin, and, although Santiago manages to kill a few, the sharks eat the fish, leaving behind only its skeleton. After returning to the harbour, the discouraged Santiago goes to his home to sleep. In the meantime, others see the skeleton tied to his boat and are amazed. A concerned Manolin is relieved to find Santiago alive, and the two agree to go fishing together.

The Old Man And The Sea contains many of the themes that preoccupied Hemingway as a writer and as a man. The routines of life in a Cuban fishing village are evoked in the opening pages with a characteristic economy of language. The stripped-down existence of the fisherman Santiago is crafted in a spare, elemental style that is as eloquently dismissive as a shrug of the old man’s powerful shoulders. With age and luck now against him, Santiago knows he must row out “beyond all people,” away from land and into the Gulf Stream, where one last drama would be played out, in an empty arena of sea and sky.

Hemingway (right) was famously fascinated with ideas of men proving their worth by facing and overcoming the challenges of nature. When the old man hooks a marlin longer than his boat, he is tested to the limits as he works the line with bleeding hands in an effort to bring it close enough to harpoon. Through his struggle, Santiago demonstrates the ability of the human spirit to endure hardship and suffering in order to win. It is also his deep love and knowledge of the sea, in its impassive cruelty and beneficence, that allows him to prevail. The essential physicality of the story—the smells of tar and salt and fish blood, the cramp and nausea and blind exhaustion of the old man, the terrifying death spasms of the great fish—is set against the ethereal qualities of dazzling light and water, isolation, and the swelling motion of the sea. And through it all, the narrative is constantly tugging, unreeling a little more, and then pulling again, all in tandem with the old man’s struggle. It is a story that demands to be read in a single sitting.

The Old Man And The Sea was an immediate success and came to be regarded as one of Hemingway’s finest works. It was cited when he won the Nobel Prize for Literature in 1954. A hugely popular film adaptation starring Spencer Tracy was released in 1958.

To see the central tenet of Hemingway´s work brought to life by the sculptor in such vivid fashion in a static piece of art is incredible. In much the same way that the eyes in a painted portrait can seem to follow us around the room, this boat seems to plough through the seas and we can almost feel the spume thrown by the struggle from the waters beneath. We are given a visual insight into the mutual respect between man and nature even in what we know is to be a fight to the end.

This is actually not the only depiction in statue form of Lanzarote´s relationship with the sea. Others can be found in Playa Honda (left) and Peurto Callera, and to any newcomers to the island reading this, there all sorts of arts installations to look out for as you tour the island. by car, bus or byke. There are similar representation of humnkind´s relationship with the sea all over the island on Lanzarote, most notably at Playa Honda (left, where a huge installation towers over a junction with the LZ2 motorway.

A mile or two down the coast road run from Puerto del Carmen to Peurto Callero is a smaller installation (shown on our cover and at the top of this article) that demonstrates how we on Lanzarote also utilise our surrounding ocean for sailing for pleasure as well as searching for food and fish.

With the tourist office vision of niche specialist holidays being part of the Lanzarote offer, this statue and others like it, could attract not only art groups from all over the world, but also, because of the Hemingway connection, book club members, and creative writing groups

The possibilities for such niche holidays are endless and could gain for Lanzarote a unique selling point in attracting a major she of tourist industry revenue.

MORE THAN A BOOKSHOP: Kelsall And Sons, Littleborough UK