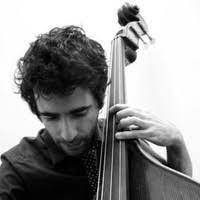 BEING LOST AS USUAL

on stage and in the studio

After having performed in Europe, Asia and South America with his two previous albums, Da Rocha now explores all his multi-instrumental versatility and creates suggestive atmospheres that can be both delicate and heart-breaking. “BLAU” is an album full of details, with guitars and other instruments that he mixes with string arrangements, acoustic drums reinforced by electronic elements, and the double bass played in an innovative way that defines his own style. The whole set takes us on a journey of musical and emotional discovery and reflection on the current world.

From an early age, Jorge was divided between music and material art forms. Whilst living in Portugal, he combined these interests. He became an autodidact music student and collaborated in both artistic and musical projects, playing the guitar and the Hindu Sitar. From 2003 to 2005 Jorge studies guitar music theory and combo at RIFF – jazz school of Aveiro, Portugal.

In 2016 Jorge records his first album in his solo career “These are a few of my favorite songs”. Its was recorded only with two instruments: Double bass and Voice, an album in which Jorge plays songs from some of his favorite artists like Radiohead, Björk, Massive Attack (right) or the Portuguese songwriter Zeca Afonso. Jorge presents this album in live shows in Spain, Portugal and Germany.

In 2017 Jorge plays in different venues and festivals in Europe: Spain, Portuga,, Germany, Switzerland and Italy. He publishes his second album “To Drop and Lt Go”. A very special album with his own compositions recorded only with double bass and voice. The album is presentes at Mercado de Musica Viva de Vic (MMVV2017) and afterwords in Portugal and Germany.

In 2018 Jorge continues to present and develop his live show, playing in solo format and duo or trio, with invited artists. Da Rocha presents his work in festivals and venues in Spain, Portugal, France, Switzerland, Germany, Luxembourg and Romania.

In 2020 Jorge publishes his third album, “BLAU – Being Lost As Usual” – in which Jorge explores self-production and his multi-instrumental facet and approaches iris style to ndie, alternative music, mixing the acoustic and electronic worlds. This album has its premiere at the Mercat de Música Viva de Vic (MMVV2019).

Jorge is also dedicated to the composition of pieces for short films (Ancora, 22S productions) and theatre and dance shows. He participated in “He Man Éh” by Cia. Zero en Conducta and composes the music for “Insecto Primitivo” by Cia. Elias Aguirre. In 2020 he composes part of the music for the award-winning film ANIMA ANIMAE ANIMAM by Zero en Conducta.

In 2021 he created the original music for the show “The Very Last Northern White Rhino” by the choreographer Gastón Core, a piece premiered at the GREC Festival in Barcelona.

BLAU is Jorge´s third album.  It reflects some of his thoughts about the state of being lost, as a powerful opportunity to improve ourselves as individuals and as a collective of humans living in the same place – Planet Earth. It´s also a personal journey of emotions and sound exploration.

From the splendour of a concert in the caves, with all its might and majesty, on the previous evening, we were now at Cic El Almacen in Arrecife, so small in stature and built for such intimacy that it somehow allows an audience to hear what a musician is thinking as he is playing.

This proved to be a unique performance, even within a category of modern music that constantly surprises us with its originality and sensitivity. Jorge took us to a meeting place from where electronics and acoustics transported us through different soundscapes and centuries of time zones to take us from last night´s classical to a place closer to indie music, and pop and song format.

After having performed in Europe, Asia and South America with his two previous albums, Da Rocha now explores all his multi-instrumental versatility and creates suggestive atmospheres that can be both delicate and heartrending. We purchased  “BLAU” (Being Lost As Usual) on leaving ´The Warehouse´ and played it as soon as we arrived home an hour later. it is an album full of details, with guitars and other instruments that Jorge mixes with string arrangements, acoustic drums reinforced by electronic elements, and the double bass played in an innovative way that defines his own style. The whole set takes us on a journey of musical and emotional discovery and reflection on the current world.

As, indeed, had the live performance ! The musician has a quiet stage presence and seems quite prepared to stand behind his music, and it might even have been his soft spoken voice that had us all leaning forward, full of curiosity about how the sounds were being made and to determined not to miss a single strand of them.

His instrument of choice was a large double bass (right) and he and it whispered sweet nothings to one another throughout the show. He sometimes tickled her tummy, and other times breathed on her belly. He rolled her like a drum and ´rocked her like the rock of ages´. That Paul Simon line came to me, I think, because somehow the sounds he and the instrument made seemed to emerge from the dawn of time before stepping into the complexities, and simplicities, of contemporary music.

On the night of the concert, whilst making sure I bought a cd, I arranged an interview with Jorge. Because he was scheduled to return in just a couple of days to his home in Barcelona, we conducted the interview by e mail later in the week.

I sent my questions in English, which he translated to Spanish and responded in that language,  which I then translated back into English by the magic of Google, (although other search engines are available) and which I now reproduce here.

WHO is Jorge da Rocha , as a musician and a man?

Jorge da Rocha is a very curious person who loves to learn, about himself, people and the world. That is reflected in my music, (which feels restless, reflective and deep as a well). And the theme behind my creations is among my personal questions and experiences, accompanied by a social reflection.

How would you describe your music and WHAT do you think is unique about your style and attitude?

I describe my music as signature music, or gourmet music, heheh! I like to think as a musical craftsman in which every detail is very careful. What makes my style and music unique is in my unconventional approach to my instrument.

WHEN did you realise the range of alternative sounds you could draw from your double bass and how did you learn to ensure those sounds enhanced your music without getting in the way of melody and rhythm?

It all started when I finished my Jazz studies at the Liceu Superior Conservatory in Barcelona (2015). After studying and playing with so many people as an accompanying double bassist of several projects, I felt the need to find my own voice with this particular instrument, trying to find the possibilities as a soloist with an instrument that very rarely appears alone on stage. The sound effects (reverb, delay, echos, tremolo, distortion, etc.) play a fundamental role in this search for sound passages that bring my music closer to an experimental and alternative side.

WHERE has your music taken you, both physically and spiritually ?

With my music I have had the opportunity to play in different parts of Europe and thus meet fantastic people related to the world of art and music. I have also been able to travel to Hong Kong, Tokyo and Bolívia. On a more personal level, music is allowing me to have a deeper contact with myself, various processes of acceptance and relationship with fears and insecurities. It has been an interesting process to assume myself as a singer, alone on top of a stage.

I love the title of Being Lost As Usual, and as a writer I have always been amazed that I always feel worried and slightly scared when I get lost in real life, but somehow perfectly safe when I got ¨lost´ in my writing. I have also interviewed a well known writer who is on the autistic scale and who told me that,  although his life was one of tightly-controlled routines, he had always felt it was ok to get lost in his writing. So, WHY did you choose Being Lost As Usual as your album title and WHAT does the phrase mean to you.?

This title is full of different meanings. On the one hand, this is how I feel artistically, I never feel completely found and I always see myself in this state of search. There is an instrumental track on the album called “The pleasure of being lost” that is directly related to the title. It happens to me that when I get lost on a trip I suddenly feel more present, open to the unexpected and somehow I feel that when we are lost we give ourselves more to chance, as if it reaches a point where you let go of wanting to control. On the other hand, the title has a social reflection. There are several songs on the album with an environmental theme (False Alarm, Terra Quente) that point to this idea that on a social level we are a little lost. Another issue still related to the title has to do with the graphic aspect of the disc. The cover is all red, orange and yellow, but BLAU in Catalan (where I live) is blue. When you open the disc you finally find …

This is your third album, so you are creating quite a body of work already. WHAT  would you like your final body of work to say about you in a hundred years time.

So WHAT lies in the future? Are there tour dates and recording sessions planned that you can tell your fans about  or do you prefer Being Lost As Usual?

I do feel I am Being Lost As usual. I would like to have a plan but I don’t, at least at the moment. Well, I know what I want to do but I need time for make it happen, and money… I don’t work with any label or agency so sometimes I feel that it’s difficult to plan a strategy for my career. At same time I can say that I am working a lot. I’ve been doing music for movie and different dance shows, which is a very inspiring work and I’m learning a lot about music production and I’m getting a lot of inspiration for future albums. I the near future I would like to do a continuation of my first album, some version of artist that I like, I recently published a version of “What a Wonderful World” and soon I’ll release “Where Is My Mind” from The Pixies (left). That album would be described as“These are a few of my favourite songs Vol. II”. Also I would like to publish an album with some of the work I’ve been doing for dance shows, and another album with original songs that I already have. So… I know the direction, but just need to find the road.