Blog
You are here: Home1 / Blog2 / Music3 / NANCI GRIFFITH: …. across the great divide by Norman Warwick 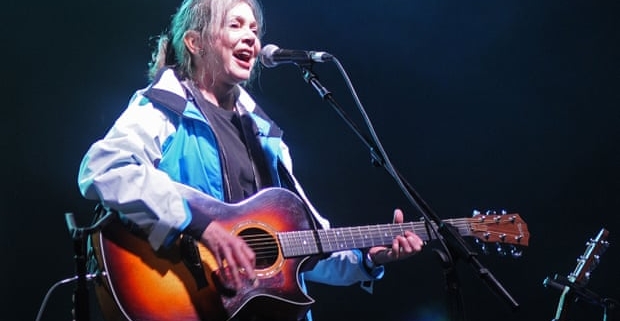 NANCI GRIFFITH: …. across the great divide

Nanci Griffith (above) was fiercely and rightly protective of an artist´s rights to be creative and after reading a review of mine in which I criticised her song and genre selection for a particular concert she telephoned me and stoutly defended her corner whilst I huddled contritely and apologetically in mine.

Like most fans of my age I am left feeling as if I have lost a personal friend when I read of the passing any of my favourite songwriters, and find myself watching a continuous reel of favourite audio visual memories spooling by. With Nanci there is an almost word for word remembrance of her opening patter, told live before playing Love At The Five And Dime, with brilliant harmonics on her guitar serving as the sounds of the in-store elevators. There are the haunting backing vocals on John Stewart´s Shadows Of The Angel´s Wings, the timeless landscape of that Gulf Coast Highway and the integrity she brought to her lyrics and the emotions she brought to her voice,

Over the last forty years her name has fallen out in conversation in scores of interviews. Indeed The Guardian on 17th August opened its typically observant obituary by saying, ´Greatly admired by her fellow artists and a devoted army of fans, Nanci Griffith, who has died aged 68, exemplified a style of musical storytelling with a literary flavour, focusing on the small details of the lives of her characters¨

Journalist Adam Sweeting continued by saying that ´songs such as Love at the Five and Dime and Gulf Coast Highway have become permanent fixtures in the folk-country canon (Griffith described her music as “folkabilly”), and the Grammy award she won for her album Other Voices, Other Rooms in 1994 seemed a long overdue reward for her carefully crafted body of work.

While that album comprised versions of other people’s songs, other artists appreciated the quality of her own material. Love at the Five and Dime, from Griffith’s album The Last of the True Believers (1986), was a Grammy-nominated country hit for Kathy Mattea, while Emmylou Harris and Willie Nelson sang Gulf Coast Highway on Harris’s hit album Duets (1990). Suzy Bogguss had a country Top 10 hit with Griffith’s Outbound Plane.

A shrewd song-picker, Griffith was the first artist to record From A Distance, written by Julie Gold (left) , and it gave her a Top 10 hit in Ireland, though it was Bette Midler who had a huge hit with it in 1990. So, too, did Cliff Richard. Another successful covers album, Other Voices, Too (A Trip Back to Bountiful), released in 1998, was accompanied by a book, Nanci Griffith’s Other Voices – A Personal History of Folk Music.

The youngest of three children, Griffith was born in Seguin, Texas, a small town near San Antonio. Her father, Marlin, was a bookseller. He also sang in barbershop quartets and was a fan of traditional folk music who introduced Nanci to the music of the 1960s folk-revivalist Carolyn Hester. His wife, Ruelen (nee Strawser), worked as an estate agent. Her parents moved to Austin during her childhood before divorcing in 1960. Griffith described her family as “really dysfunctional”, and her song Bad Seed, from the album Intersection (2012), was addressed to her father, and included the lines “Bad seed, there’s a darkness I can’t hide … too much pain to keep inside.”

She learned to play the guitar by watching a PBS TV series hosted by Laura Weber and started to write her own songs. Her first performance was at the Red Lion club in Austin, when she was 12. She listed the songwriter Odetta as one of her key influences, and defined herself by saying: “You take a whole lot of Woody Guthrie and a whole lot of Loretta Lynn, swoosh it around and it comes out as Nanci Griffith.”

Nanci (right) recalled being strongly affected by seeing her fellow Texan Townes van Zandt perform, singling out his song Tecumseh Valley, the kind of finely drawn narrative that would become a trademark of her own work.

She played in clubs while finishing her academic qualifications, and armed with a degree in education from the University of Texas, she became a kindergarten teacher. In 1978 she released her debut album, There’s a Light Beyond These Woods, ´(Mary Margaqret) on the local Austin label BF Deal. The title song defined some of her essential qualities. It was a haunting and nostalgic saga of two childhood friends pursuing different paths through life, and included a reference to a boy called John, who had been her high school sweetheart but died in a motorcycle accident. Also in 1978 she won the New Folk competition at the Kerrville folk festival.

She made three more albums for the independent labels Featherbed and Philo, the last of them the Grammy-nominated The Last of the True Believers, before moving to Nashville in 1985. Her arrival there coincided with a boom in so-called New Country artists, including Steve Earle and Lyle Lovett, though she insisted that she did not belong to that category. She signed a deal with a major label, MCA, for whom she recorded a quartet of albums including Lone Star State of Mind (1987), which reached 23 on the US country chart and gave her a country Top 40 hit with the title track, and Little Love Affairs (1988), which went to 27 on the country chart.

Griffith put together her renowned Blue Moon Orchestra, which would accompany her for more than a decade. The albums Storms (1989) and Late Night Grande Hotel (1991), produced by the rock producer Glyn Johns and Rod Argent and Peter Van Hooke respectively, provoked some criticism from purists for aiming for a more mainstream audience. (yes, yes, I know and I apologised !)

In 1993 she moved to the Elektra label where she would enjoy her highest profile successes. Other Voices, Other Rooms (1993) borrowed its title from Truman Capote’s first novel and was a collection of songs by writers who had inspired her, including Guthrie, Van Zandt, Bob Dylan, Janis Ian (left) and John Prine, and featured guest appearances by Dylan, Prine, Hester, Emmylou Harris and Iris DeMent.

Further success followed with Flyer (1994), which cracked the Top 50 in the US and reached 20 in the UK, though subsequent releases saw her sales falling away.

Griffith suffered health problems. She was diagnosed with breast cancer in 1996 and thyroid cancer in 1998. A case of Dupuytren’s contracture caused her to lose flexibility in her fingers.

She was married to the Texan singer-songwriter Eric Taylor (right) from 1976 until their divorce in 1982.

Taylor had served in Vietnam, and in 2000 Griffith visited Vietnam and Cambodia with the Vietnam Veterans of America Foundation. Vietnam was the subject of several songs on her last Elektra album Clock Without Hands (2001), named after a novel by Carson McCullers.

She recorded four more albums, the last of them being Intersection, recorded at her Nashville home with Pete and Maura Kennedy and the percussionist Pat McInerney. Two of its songs Come On Up Mississippi and Bethlehem Steel reflected some of Griffith’s social and political concerns.

That seems to me a fastidious and heartfelt memorial to Nanci, but without Townes Van Zandt, John Stewart, Guy Clark, John Prine and having lost within days of Nanci´ s death´,John Moloney of The Chieftains, an artist with whom she had recorded we are left to wonder who might be among the generation to succeed them. She really was one of those artists who come along just once, in a very blue moon.

We will set off down sidetracks & detours to look for such artists, but if any readers have ideas of their own please let us know at normanwarwick55@gmail.com

Meanwhile, for solace over the next few days I shall be listening to a selection of songs by Nanci Griffith and by and with other writers, including John Stewart the man who first mentioned her name to me. Here is my probable playlist, all songs written by Nanci unless stated.

Nanci could be plaintive and forthright, nostalgic and forward looking and it was these apparent contradictions that made the ride worth fare.

Once In A Very Blue Moon

Spin On A Red Brick Floor

The Last Of The True Believers

Love At The Five And Dime

Light Beyond These Woods

Trouble In The Fields

The Wing and The Wheel

I´m Not Driving These Wheels

Brave Companion Of The Road

One Of These Days

Hell No, I´m Not Alright

The prime source for this article was a heart-felt obituary by Adam Sweeting,  published in The Guardian

From Monday to Friday, you will find a daily post here at Sidetracks And Detours and should you be looking for further good reading over the weekend you can visit our massive but easy to navigate archives of over 500 articles.

THE DEATH OF A TRUE CHIEFTAIN