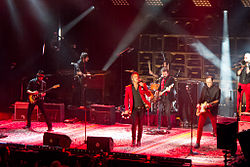 IF ANYONE CAN ROCK,   M CLAN CAN

M Clan is a Spanish rock band. The band, initially named Murciélagos Clan, was formed in Murcia, (Spain) in 1992 by Carlos Tarque and Ricardo Ruipérez.

The band’s 1999 release Usar y tirar went platinum, leading to the release of their 2001 Unplugged album Sin enchufe. The band released Sopa fría in 2004 under Warner Bros. and Eastwest Records.

This time Carlos Tarque (vocals) and Ricardo Ruipérez (guitar) were performing without accompanying musicians, alone on a tour that promised closer, more intimate concerts than have previously been delivered. Without the company of their usual band, they were promising to review selected songs from their entire repertoire in acoustic format, offering a sense of occasion, and an exceptional opportunity to listen to classics hits reinterpreted with a different nuance.

I grew up on pop music, particularly that in the singer-songwriter category and have for the last fifty years of my adult life focused on the niche Americana contributions from writers like Townes Van Zandt, John Stewart, Guy Clark and Nanci Griffith, and even now, typing their names in a cluster like that, I am reminded of what a great loss we have suffered recently with the deaths of a generation like this. There are, though, new names coming through from a new generation and Americana music is alive in the present, looking back to the migration and settlement era even whilst looking bravely ahead to the future.

Having only lived here, in my dotage really, for six years  I have not yet become familiar with Spanish rock as a genre, other than collecting recordings by Joacin Sabina, a singer writer in the Springsteen mould. The first time we went out for a meal after re-locating over here, one of his albums was playing in the restaurant.

The main fare on offer here on Lanzarote is usually classical or folk-lore, both of which we love. Regular readers will have read our very positive comments on The Frieburg Philharmonic Chamber Orchestra or our review of Guitar and Timple In the Courtyard by Abraham Ramos and Juan Sebastian Ramirez, and if you wish to refresh your memory, there are many other reviews in our easy to negotiate archives, but I think there has only been one review of a Spanish rock group.

Tonight, we didn´t march confidently into the El Salinero Theatre, surrounded by fellow members of our own generation. We, in our sixties, were instead surrounded by a generation that, clearly, had not even been been born in the swinging sixties. We were, patently, The Oldest Swingers In Town, as Fred Wedlock would have called us.

This was a generation of thirty somethings, dressed in their finery and sitting quietly and politely in their theatre seats, awaiting the presentation from their heroes. The two musicians strode on, centre-stage, and these ´kids´ erupted, whooping and hollering as if this were The Beatles at Shea Stadium, although I doubt that any of these patrons would understand that reference.

Tonight, the speakers were not set on tranquillo,…..all needles would have been pointing, instead, to red for danger at the top of the dials. However, I liked the ´system´ here, ´where the bottom was good and the treble was clear´ as Townes Van Zandt described in To Live Is To Fly. The mix was perfect, with voices, full of gravelly, raspy and very authentic rock-hard vocals sitting perfectly on top of paired perfection from either two guitars, on occasions, or more often guitar and beat box. or harmonica

The vocals were delivered in Spanish, of course, so we never really got the narrative of any of the songs but all the young people in the audience were word perfect on every line, pitch perfect in their audience accompaniment and rhythmically on time with all the hand clapping and hand waving in the air encouraged by the energetic musicians. This was a love-in really, (Sorry, that´s another phrase coined and since forgotten and lost to others by my generation) between the group and their fans but we felt like invited guests rather than wallflowers or gate-crashers.

Dee loves anything that reminds her of her days screaming at Cliff Richard concerts and I love any music that evokes my kind of Americana sounds. Here and there we heard Eagles-like harmonies, Springsteen-sounding anthems and, perhaps the highlight of the night, a smirking-schoolboy rendition of Maggie, straight out of the Rod Stewart songbook, and sung in the same gravelled style.

There were several songs performed to a variation of the Bo Diddley beat, which revealed how deeply the duo have researched or infused this kind of music (and by the way, do we know if anybody has paid Bo Diddley yet?) and there was a gorgeous Jackson Brown-like California, souvenirs reminding us of John Prine and on-the-money harmonica contributions from Carlos Tarque, that were Dylanesque in the best possible way.

Whereas Tarque´s vocals were Jim Croce-like in character there were times when Ricardo sometimes sounded more like James Taylor at his best in the Fire And Rain.

It seems to us, visiting two or three concert a week, that there has been a deliberate effort, perhaps especially at El Salinero, from our theatres to increase availability of seating at every safe opportunity, and so although seating was still segregated this was the largest audience we had seen since settling in level one restrictions. When the ´kids´ rose to their feet to demand two encores we were a minute or so behind them in helping each other out of our seats, but our enthusiasm was no less than theirs for what he had all heard.

As the audience filed briskly out, looking to us like Danny And The Juniors, we walked out behind, somewhat more circumspectly.

its always gonna be this way

´cos rock ´n roll is here to stay.

In Praise Of Those Who Teach