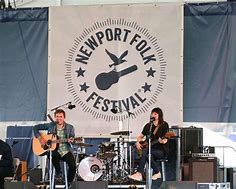 It takes a fair and just writer to accurately place a concert in precise context. A review of a concert, or album, or art of any kind perhaps, should be judged on its artistic merit, rather then whether it met expectations heightened by the desire of freedom of covid, nor whether it met any tempered expectations arising from the pandemic lay-off. In fact, we might rather hope that our musicians and creators are not affected by either of those extremes.

It seems to me that journalist Paul Robicheau, writing for Arts Fuse, understands all that and he reports accordingly at

Robicheau describes himself at the unflatteringly titled Muck Rack site as a freelance journalist and professor and he certainly has plenty of writing material in the archives at The Arts Fuse.

The Arts Fuse is described on line as an online arts magazine covering cultural events in Greater Boston, as well as Connecticut, Maine, Massachusetts, New Hampshire, Rhode Island, Vermont, and New York. providing a next generation platform for arts and culture consumers across New England and beyond.

The concensus among many writers on-line who attended the event seems to be that the Sunday highlight was an evening of black female artists curated by singer, songwriter, poet and activist Allison Russell. Arts Fuse certainly seemed to agree with that verdict. With extraordinary love and enthusiasm, she introduced one phenomenal artist after another to the Newport crowd. The biggest headlines were Brandi Carlile and the legendary Chaka Khan joining the stage, but the performance of the night may have been Celisse, who sang a dynamite version of Eyes On The Prize, beginning a capella and channeling Aretha Franklin before transforming the song into a rowdy, Chuck Berry-esque romp. I can’t imagine I’ll see a better performance all festival.

Monday was a busy, busy day of interviews and portraits, but there were some fantastic sets. The Middle Brother set was wonderfully energetic. On the other end of the spectrum, Death Cab for Cutie frontman Ben Gibbard held the entire crowd spellbound, alone on a stage with a guitar, gently fingerpicking and softly singing—he also covered The Magnetic Fields, which was a fun surprise. Christopher Paul Stelling was a high-energy dream on the busking stage. And Brothers Of A Feather, otherwise known as Chris and Rich Robinson of The Black Crowes, proved that they definitely don’t have to have howling guitars to impress. Another favourite highlight was Middle Brother’s set, from the very first moment when they opened with the Traveling Wilburys’ classic Handle Me With Care—one great super-group tipping their hats to another one. deserving of special attention nevertheless was Taylor Goldsmith of Dawes and his fantastic rock-star preening. Check out the article Open Dawes To Great Music in our easy to navigate Sidetracks And Detours archives.

Tuesday was the hottest day of the festival, said more journalists, at least in terms of the actual temperature at the fort. Artists, audience and press could be seen mopping their brows and commiserating about being worn down. The performances themselves generated a good deal of heat, too. Emma Swift and Robyn Hitchcock began the day with a set of Dylan covers befitting the setting. But the set of the day had to be from emerging Queen of The Fest Allison Russell, who turned in a stunning selection of personal stories in song, alternately tender and fierce. Langhorne Slim was uncharacteristically talkative during his set, sharing heartfelt insight into his recent emotional journey and then pouring those emotions into his songs.

´It’s amazing to come to one place and see all your friends you haven’t seen in a year´, a similarly talkative Nathaniel Rateliff told the crowd at this past week’s tweaked iteration of the Newport Folk Festival, re-branded Folk On. And, in noting that, Robicheau reminded us that  it had actually been two years since performers and fans last convened at Fort Adams State Park, and this time, the attendance was limited to about half capacity, while the days doubled to six.

´Sure´, Mr. Robicheau wrote, ´there was a joyful sense of déjà vu — yet different in the continuing age of Covid. With only 6,000 people (who registered proof of vaccination or a negative test) for a less-crowded peninsula, Folk On seemed more intimate and it was less hectic to move between the event’s two main stages (plus tiny buskers’ stage) rather than the usual three. The setup will be similar for this weekend’s sold-out Newport Jazz Festival.

Folk On both exceeded and tempered expectations. Since Newport Folk instantly sells out long before line-ups are released, there’s plenty of room to save surprises — and that held true. Rateliff was one late announcement, playing as a subdued solo artist with an extended band on Sunday in addition to leading his soul outfit the Night Sweats. Friday’s bad weather kicked the Night Sweats to a Monday slot where he finally ditched the guitar to rouse fans with preacher-like energy. That was a tough act to follow for Brothers of a Feather, the Black Crowes’ Chris and Rich Robinson as an acoustic duo that had some trouble downshifting into that catalog without the bluster of their rock band from their current reunion tour.

Surprises continued through the festival’s three-day second session. Black Pumas (left) showed their ubiquitous hit “Colors” isn’t their only catchy soul-funk tune, while frontman Eric Burton proved an active, charismatic force, jumping into the crowd. But Bleachers — led by uber-producer Jack Antonoff (Lorde, Taylor Swift, etc.) — seemed misplaced and sloppy in stripped-back mode with acoustic guitar, piano and saxes, rocking Springsteen-allusive tunes, and covers like a weirdly whimsical “A Hard Day’s Night” and a flat take on Waterboys’ “The Whole of the Moon.”

Antonoff also joined a few guests for Beck for Tuesday’s highly anticipated closing set. The shape-shifting L.A. troubadour started solo with ’90s nuggets like “Pay No Mind (Snoozer)” and a loose, harmonica-fueled “One Foot in the Grave,” then poked fun at folk singalongs with snippets from Dylan to Prince. Beck’s longtime guitarist Smokey Hormel emerged to lend texture and Antonoff acquitted himself well on a duet of soundtrack curiosity “Everybody’s Got to Learn Sometime.” But a winsome, fingerpicked “Lost Cause” was stupidly interrupted by the “Check 1, 2!” of comedian Fred Armisen (who’d done musical spoofs on the other stage) banging a drum kit in a mock soundcheck. After a round of goofy riffing, they finished with the falsetto-tinged “Debra” and Beck’s slacker anthem “Loser.”

The real rock came from Wednesday closers Deer Tick and offshoot Middle Brother, fronted by Deer Tick’s John McCauley, Dawes’s Taylor Goldsmith, and Delta Spirit’s Matt Vasquez. Celebrating the 10th anniversary of their Middle Brother debut, they cheekily opened their Monday main-stage set with bonafide supergroup the Traveling Wilburys’ “Handle with Care,” swapping off the George Harrison, Roy Orbison, and Dylan-led parts. Speaking of Dylan and Middle Brother, Emma Swift opened Tuesday’s main stage with measured readings of the bard (his recent “I Contain Multitudes” is her favorite), backed by partner and psyche-pop cult figure Robyn Hitchcock — after a Twitter kerfuffle where she felt bumped from the buskers’ stage so Middle Brother could add a weekend acoustic set.

Weekday firepower sparked some regrets from weekend-only attendees, yet they bore witness to the six-day fest’s most stirring collaborative set in Allison Russell’s Once & Future Sounds. Building on 2019’s Dolly Parton-capped collaboration of women curated by Brandi Carlile (who showed up for Sunday’s finale), Russell extended the circle to spotlight women of color and the LQBTQIA community.

“It’s our time to rise,” Russell said, joined by artists including the expressive Joy Oladokun, unorthodox fingerpicker Yasmin Williams, Margo Price (part of a group take on the Beatles’ “Help!”) and Yola, who’d just torn up the stage with her own genre-smashing set that included her new disco-slanted “Dancing Away in Tears” with Natalie Hemby and “Be My Friend” with Carlile. Celisse Henderson sang a volcanic rendition of civil rights anthem “Keep Your Eyes on the Prize,” peppered with her searing electric guitar. Guests kept rolling out, with Sunny War, Amythyst Kiah (Russell’s bandmate in Our Native Daughters), Adia Victoria, Kyshona, poet Caroline Randall Williams, and the Suffers’ Kam Franklin — until the big reveal: R&B icon Chaka Khan, leading the troops in “Ain’t Nobody” and “I’m Every Woman.”

The graceful Russell also slayed in a Tuesday solo set showcasing her wondrous album Outside Child, centered by the haunting “Hy-Brasil,” a nod to her Scottish-Canadian heritage and freedom from parental abuse that closed with her clarinet. The magic of Newport Folk is found as much through the discovery of emerging artists as it is hearing established headliners. Billy Strings (right) was a relative newbie in 2019; now he’s growing like a supernova and appeared twice with his bluegrass quartet, first in a sit-down tribute to Doc Watson and then firing up fans like a flatpicking rock star who can tap into sustain and pedal-altered tones. Other weekday head-turners included S.G. Goodman (a Kentucky farm hand who cast wryly observant lyrics in gritty guitar tones) and the clarion-voiced Katie Pruitt, who opened up about pandemic anxiety with “My Mind’s a Ship (That’s Going Down).”

Performers regularly noted it was their first time back on a concert stage since Covid hit and the majority (including Grace Potter, Randy Newman, Jason Isbell, Ben Gibbons and Aoife O’Donovan) appeared solo or with minimal guests rather than full bands, adding to the nerves of some. Julien Baker sat down to go full acoustic, including banjo, and lost some of her usual intensity. Spectral singer Sharon Van Etten burrowed into solo electric and acoustic guitars and a piano to convey her melancholy songs, but she stumbled trying to compensate for lost production with a drum-machine beat that distracted in songs like “Comeback Kid.”

Mandolin virtuoso Chris Thile, on the other hand, was right at home playing solo, from the White Stripes’ “Dead Leaves and the Dirty Ground” to an astoundingly nimble Bach concerto — before he lost the crowd in a tedious, pretentious piece inspired by C.S. Lewis’s The Screwtape Letters. He almost made amends by singing David Bowie’s “Starman” with Lake Street Dive’s Rachael Price during that band’s encore tribute to late radio host Rita Houston, followed by her other faves “You Are Not Alone” (with Allison Russell subbing for Mavis Staples, who plays Newport Jazz on Saturday) and “Instant Karma,” with the Head and the Heart’s Jonathan Russell. Price commanded the stage before that as her band roared through old and new material with guitarist James Cornelison filling in for the recently retired Mike “McDuck” Olson. And the six-day festival successfully closed with Deer Tick, nodding to its Providence roots with “Smith Hill” and joined by stragglers to sing “Goodnight Irene,” Newport Folk’s traditional closing number, still shining on in a very non-traditional year´.

The prime source for this article was a piece written by Paul Robicheau, for Arts Fuse.

In our occasional re-postings Sidetracks And Detours are confident that we are not only sharing with our readers excellent articles written by experts but are also pointing to informed and informative sites readers will re-visit time and again. Of course, we feel sure our readers will return to our daily not-for-profit knowing that we seek to provide core original material whilst sometimes spotlight the best pieces from elsewhere, as we engage with genres and practitioners along all the sidetracks & detours we take.