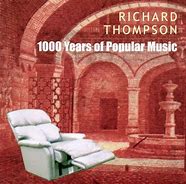 and heard by Norman Warwick

´You know if the roof on the Albert Hall had caved in tonight it would have wiped out the royalty of 20th-century folk music in one foul swoop´, wrote journalist Danny Neill, who was there to record the event for Folk Radio.

´It feels like anyone who´s anyone, in folk music terms, is here, even in the bar before the lights go down, I suddenly realise I’m standing next to Joe Boyd who is having a chat with Loudon Wainwright III. This really is no ordinary night; everyone is anticipating a one-off performance that promises a bountiful selection of musical treats. It’s all in honour of Richard Thompson’s recent 70th birthday; unfathomably to this day still one of the UK’s most un-hyped and criminally underrated guitarists and songwriters. To those in the know, he shares the same exceptional space occupied by the Dylan’s and Cohen’s of this world. His back catalogue substantiates this grand claim and yet the man himself remains doggedly averse to self-aggrandization, always one to let the music do the talking. But tonight, for one night only, he’s allowing himself the most prestigious venue of all to revisit over 50 years of making music and of course, typically, he’s not going to hog the limelight. This is Richard’s party, but you can all join in!

Three hours of performance commence with the announcement of “the Richard Thompson Trio”. Noting that “the trio’s expanded” (there are five musicians on stage) they open with The Storm Won’t Come from last years 13 Rivers LP. This is where the similarities to an ordinary Thompson gig end. The role of compere has fallen to the leading man’s son Jack Thompson.

A chilled and amiable host throughout, Jack  calls to the stage the first of this evening’s special guests, Hugh Cornwell. Richard offers by way of an explanation that they were in a school band together back in 1964 and so they revisit one of the songs played back then. The Nashville Teens Tobacco Road pounds the pillars with all the raw garage intensity you’d expect from a young band finding their feet in music and Richard’s got a real love for sounds of that period. He and Hugh engage in a little badinage, “so Hugh we sort of lost touch after school, you been up to much?” Turns out he formed a band called The Stranglers and so they continue, pumping out a version of their punk classic Peaches. This is a nice gesture offered to many of tonight’s guests, a song from Richard’s catalogue followed by one of their own.

There’s a suggestion of chronology initially as following the school band Richard recalls falling in with a “dubious crowd from the Muswell Hill area”, thus ushering in the proto-Fairport line-up to play the jug band tune Blues In The Bottle. Well at least it should have been Ashley Hutchings and Simon Nicol (left) who appeared on stage, but we’re informed that Simon has been Thomas Cook-ed and is stuck in Greece and so unable to make it tonight. His place is taken by Blair Dunlop but there’s an unexpected twist in this tale as Simon does actually show up on stage among the chorus ensemble for the grand finale of ‘Meet On The Ledge’, some three hours later. The hilarious double-take Thompson shoots his old pal upon seeing him onstage really was priceless. Back in the first half, the early Fairport representatives are swelled by the addition of Dave Mattacks on drums for a run-through of Jack O’ Diamonds. At this point, the ordered narrative starts to jump around some more as Dave Pegg arrives to lead Richard through Down Where The Drunkards Roll.

I don’t know why they’re picked me to sing this one´, ´Peggy´ jokes.

Jack Thompson makes reference to the diversity in musical styles performed tonight, something firmly demonstrated with Bob Mould joining the electric band to tear through Turning Of The Tide and his own If I Can’t Change Your Mind. There can’t be too many folkies who can hold their own with a rough-edged grunge pioneer like this former Husker Du and Sugar frontman, but Richard commands respect from all corners of the musical universe with good reason and he clearly gets a kick out of cranking it up like this. Jack Thompson seems to as well, he comes back out to say he “started a mosh pit backstage, just as Victoria would have wanted´.

If there was one disappointment this evening it was that three hours wasn’t anywhere near enough time. This audience were so thoroughly nourished by the entertainment and the thunderous rolling cast that they’d have happily sat here for six hours at least. The line-up certainly offered many tantalising potential permutations but obviously, as had previously been discussed on Folk Radio, the hope that Linda Thompson would be revisiting one of her classic Richard & Linda era vocals with her ex-husband was never going to be realised. And so, the unenviable task of following in her footsteps fell to others, but boy how they stepped up.

Kate Rusby sang Withered and Died with a fragile purity that was absolutely spot on. And as for Eliza Carthy performing The Great Valerio unaccompanied, well words can’t really do it justice. I know she has good form when it comes to playing in venues of historical pedigree, but she still has no right to be this amazing. She almost stole the show, it was quite simply a master-class in getting inside a lyric, caressing a melody and casting an audience under a magical spell. I hope this was recorded but then being in the moment, as Eliza so emphatically demonstrated, is really the thing that matters. I’m not sure you can capture this elusive elixir anyway.

On any other night Mary Waterson joining Richard and Martin Carthy to sing Fine Horseman, written by her mother with Lal Waterson, would have been a gold star moment. Here however it was simply one more highlight in an evening that was raining golden nuggets on the listeners. The guests, by and large, were effusive and keen to show respect towards their host the birthday boy. But this was very much the family affair as well and it was amusing to observe how the relatives were more inclined to treat Richard how most kids treat their old man. In fact, far from being too eager to please his father-in-law, The Rails James Walbourne took to the stage in his own time with a nonchalant “sorry I was watching the football”. He soon found himself in the unenviable position of rocking out whilst sharing a stage with his mother-in-law who deliberately stepped forward to watch him play whilst pulling a face that said “ooh, he is good on that guitar isn’t he?”

So yes, we did see Linda Thompson on stage and no, sadly it was just in a chorus cameo capacity. That memorable moment followed The Rails energised run-through of Keep Your Distance as the whole Thompson family clan united to sing a charged rendition of That’s Enough, an overlooked Thompson gem which featured on the eponymous family collective album in 2014. For the record the body language between Richard and Linda was pretty much how you’d expect a long-time divorced couple to behave, each respects the other´s space and eye contact is pretty much non-existent.

Of course, the other notable female vocalist Richard Thompson’s career is indelibly linked to is the late, great Sandy Denny. Richard has always acknowledged how highly he rated her and Who Knows Where Time Goes has remained a song he frequently returns to in concert. Tonight, however, the Denny masterpiece is superbly delivered by Olivia Chaney. As fine a rendition as it is though, an added bonus is it allows Richard to revisit the electric guitar embellishments that were such a vital important component on the classic Fairport version fifty years ago.

We’d already enjoyed the concert of a lifetime as the final half-hour approached and still, this event had more aces up its sleeve. The one song cameo by Derek Smalls (formerly of the band formerly known as Spinal Tap) shone a light on the previously un-spoken, un-rumoured, notions of Richards influence on the world of Heavy Metal. And surely Derek’s story song of the girl who “puts the bitch into obituary” flags up the ties that bind the folk song tradition and the dark gothic fables of…. oh, sod it, it was just very funny ok?!

Loudon Wainwright III was the penultimate guest and, as much as his duets with Richard being limited to two numbers seemed a little miserly, when the brace of tunes are Swimming Song and I Want To See The Bright Lights Tonight we’ve hardly got anything to complain about.

Then finally David Gilmour comes to the stage, a first division name to really give kudos and credibility to the earlier statements I made about Richard’s stature in the world of music. Gilmour acknowledged it years ago by covering Dimming Of The Day and tonight he faithfully revisits that song alongside its writer. But Gilmour’s real gift to the evening is a rousing rendition of the Pink Floyd early gem Fat Old Sun. I maintain strongly that the most subtle yet pivotal ingredient of Pink Floyd’s sound is the beautiful, soulful and gently un-demonstrative guitar work of Gilmour. Equally, Richard Thompson has never been one to deliberately showboat on his instrument. Both artists have always served the needs of their songs and so, to sit back and enjoy them trading solos tonight is in every way, a rare and wonderful thing.

Meet On The Ledge brought the cast back onstage for a communal conclusion. The crowd stamped, stood and clapped for more but at the 11 pm hour, sadly that was never likely to be. Instead, Jack Thompson got a rendition of ‘happy birthday to you’ started up but, predictably, Richard was already halfway into the dressing room by then. He did an about-turn and sort of half made it back to the stage to wave his gratitude but as we all know, that wasn’t the kind of attention he was out for tonight. For his birthday treat Richard Thompson wanted to share and play his music for his friends and fans. I doubt anyone here tonight will begrudge that basic wish; we have all been the recipients of one man´s birthday generosity. A simply unforgettable night.

Don´t forget to look out next week for Murmurings Of Memories To Come, our look at Richard Thompson´s autobiography, Beeswing.

when RICHARD THOMPSON planned his party