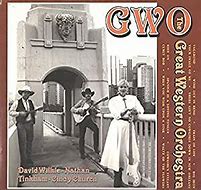 with album review by John Nelmes

David Wilkie released the album (shown left) in 1981. He then formed The Great Western Orchestra and in 1985 became the founder member of Cowboy Celtic. The Turner Valley, Alberta, mandolinist has been called an elder statesman of Alberta music, and has compiled an impressive list of noteworthy artistic achievements while building his varied career as musician and band leader, songwriter, record producer and broadcaster.

David spent much of his childhood on his grandfather’s ranch in California, and grew up watching all the western movies, playing the parts, and listening to the music. His attraction to the cowboy lifestyle and music was reawakened when, in his twenties, he moved to the beautiful ranching country in the Rocky Mountain foothills of southern Alberta. He worked off and on as a ranch hand, especially during calving season and at brandings, and mostly for the historic Tongue Creek Ranch, which was founded and run by the Guinness company out of Ireland. At the same time, Wilkie was always playing music in a band, and for six years, was the music director and radio programmer for a 50,000 watt country radio station in Alberta. There, he was exposed to an extensive repertoire of western music, had his own cowboy radio show, and visited often with country and cowboy music greats, including Roy Rogers.

When he left radio to play music full time, he hooked up with Canadian legend Ian Tyson for four years of concert dates and recordings. In 1985, he formed The Great Western Orchestra (GWO) and produced three albums, one released on the Sony label (formerly CBS), and the following two independently released on Wilkie’s own label, Centerfire Music.

While working on various musical projects, David Wilkie has devoted time to one of his favourite passions – the seeking out of Celtic origins of traditional cowboy music. The result has been the release of three highly successful Cowboy Celtic CDs, The Drover Road (2001), Cowboy Ceilidh (1997) and Cowboy Celtic (1995). The ‘Celtic and cowboy’ musical marriage on these recordings has struck a chord with music lovers on both sides of the ocean. As one reviewer put it, “This is more than music. It’s theatre and imagery and history and storytelling and more, all wrapped up in sagebrush and tartan.”

Wilkie has produced several albums for other artists, both in Canada and the U.S., and has composed the musical scores for numerous short films and documentaries. He played mandolin and mandocello on Maria Muldaur’s Granny-nominated CD Richland Woman.

With his song-writing talents and sense of humour, he became a favourite of national CBC radio fans several years ago, regularly composing amusing songs on current events for various national radio programs. His latest song covered the 2002 Winter Olympics in Utah. Wilkie is better known and respected as a serious song writer, and his songs Wind In The Wire and Cowboy Boogie, co-written with GWO partner Stewart MacDougall, were recorded by Randy Travis on the Warner Western record label. Travis also featured the GWO’s music on his ABC TV special Wind in the Wireand an animated film of the GWO song Cactus Swing was produced by Canada’s prestigious National Film Board. The group also performed to sold-out audiences with the world renowned Edmonton Symphony Orchestra.

You don´t have to take my word for how good and influential David Wilkie and his music have been. John Nelmes, my former editor at Country Matters, a man of sound judgement, with only that temporary lapse of hiring me, published a positive review, thirty and more years ago now, that is posted again here to help preserve Wilkie´s work for posterity-

Buffalo Ground and Wind In The Wire

The Great Western Orchestra is comprised of David Wilkie and Stewart MacDougall, plus friends. David who made such an impression with his mandolin playing whilst touring the UK with Katy Moffatt recently teams with keyboard and vocalist, Stewart, to deliver two albums firmly rooted in the cowboys ‘work-place. The forces of nature are recognised in their writings as are various musical influences, in such as the trail song Railroad Corral (written in 1904) to the Spanish sounding  Heart Of The Matador.

Buccaneer/ Buckaroo tells of fishermen and cowboys leading parallel lives even as each is an endangered species, (much the viewpoint taken by my signwriting partner, Colin Lever, in Lendanear, with Fishes And Coal.) and the history of wrong doings against natives and wild life in the American continent are not forgotten . The opening track on Buffalo Ground is Joanna´s Song and is performed by the splendidly named Joanna Crop-Eared Wolf and was recorded at Head Smashed-In Buffalo Jump, in Alberta. The title track mourns the killing of the buffalo , while the title track of the other cd is Wind In The Wire, telling a ghostly story of the tune that the wind plays as it passes through the barbed wire, which was such a hated album when it was first used.

Haunting melodies with keyboards and mandolin can be found in a selection of instrumentals such as The great Western Overture, with which they open their live shows. Forest fanfare trumpet and horn and Swan With Two necks includes superb mandolin. Both Prelude and Revisited are tracks off Buffalo Ground. Big Rock Candy Mountain is a new arrangement of the Burl Ives song we are more familiar with.

David and Stewart both worked for Ian Tyson, which may explain some shared musical references, but they never actually met until they worked together in Katy´s Cowtones band in 1986. Katy co-wrote Magdalena And the Jack Of Spades with David, a song with Marty Robins written all over it. Although David´s skills might have sprung a delightful surprise on British audiences but he has written two hits for Randy Travis in Cowboy Boogie and Wind On The Wire.

If you are looking for an album or albums that are a little different to the product that comes off the Nashville conveyor belt, songs that make you think and reflect on historical injustice or the wonders of nature, or maybe hanker after a cowboy´s life, then I suggest you seek out this double album. I found it made compelling listening.