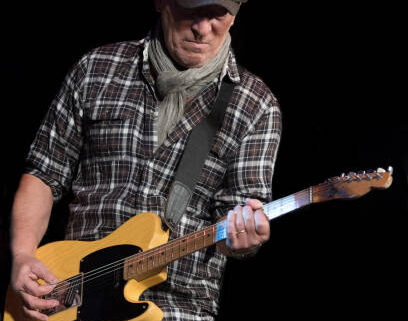 but don´t know what that but is, about Springsteen.

Critics have described Springsteen´s latest album as being amongst his best, most collaborative work. To say that of a canon that includes the eerie introspection of Nebraska and the subdued but barely disguised anger of Born In The USA and the incredibly moving Streets of Philadelphia is a strong recommendation of Letter To You. A few weeks ago I posted an overblown account of covers recorded and performed by my own folk band Lendanear during our time in the seventies. I mentioned all the important stuff, like Digging This Hole and The Ballad of Robin Hood, but only realise now, as I write this, that I forgot that we had recorded Springsteen´s Factory on our Theatre Of The Mind album (see www.lendanearmusic). Colin gave a great a capella version of that powerful song, to which our audience on the live recording sang along as if it were a folk-standard.

I knew we had recorded it, its there on our record sleeves, filed on my shelves and listed in my archives but,…… I simply forgot.

It is true that from the start Springsteen had me Blinded By The Light, but that was via Manfred Mann.

I love Dancing In The Dark, especially when I´m On Fire and I have an eye and an ear for Girls In Their Summer Clothes. I was mesmerised by his Brilliant Disguise and would have lingered in The Tunnel Of Love but……

I recognise that his music has a Human Touch and I see now how prophetic he was with his observation that we have Fifty Seven Channels (and Nothin´On), especially given that today we could multiply that number by ten. Radio Nowhere got it right as well. His Streets Of Philadelphia were sad, and scary and The Rising was exactly what the title suggested, at a time when America most needed that, but…

I loved his fairly recent recordings of We Shall Ovecome, The Seeger Sessions. Coming from a British folk background with a love of all things Americana I adored his folk-revival albums with his E Street guys, with tracks like Lay Me My Pallet Down and his wonderful version How Can A Poor Boy Stand Such Times And Live, but…..

… I forgot we had recorded Factory, perhaps because the factory stood in The Darkness On The Edge Of Town, which might be an allegory of where Springsteen´s work stands in my music collection.

Nevertheless, I was again excited by the reviews I read of this new album, and was reminded by Eric R Danton, writing in the Paste On Line magazine late last year that

´There’s something to be said for songs that do exactly what you think they’re going to do, in the best way possible.´

Eric is right in that I always felt reassured whenever I played a new album by an artist I loved and found it sounded just like him, but most of the artists I most treasure, like John Stewart, Guy Clark, Townes Van Zandt and Gary Hall expanded and explored new sidetracks & detours with each new album.

Nevertheless I know what Mr. Danton means by ´songs that do exactly what you think they’re going to do, in the best way possible,´ so I find it reassuring to hear him say that,

´Bruce Springsteen’s new album is full of them. Letter to You follows fast on the heels of Springsteen’s cinematic 2019 release Western Stars, but while the latter was a solo effort, Springsteen’s latest recording reassembles an E Street Band in peak form on nine newly written songs and three he’s had kicking around since before his 1973 debut.

The musicians recorded the album in just five days last November at Springsteen’s home studio in New Jersey, playing almost everything live to tape—a throwback to the way they used to work. In another break with years of precedent, Springsteen didn’t make demo recordings outlining his rough ideas for musical arrangements. Instead, he played through the songs on an acoustic guitar in the studio, and then he and the band set about arranging and recording them. That more spontaneous approach turns out to have been crucial: By giving the E Street Band full rein to play like, well, the E Street Band, Springsteen ended up with his most E Street-sounding album since Born in the U.S.A..

Letter to You is stacked with pulsing Max Weinberg backbeats, elegant piano vamps from Roy Bittan and fervent saxophone parts from Jake Clemons, nephew of the late, great E Street stalwart Clarence Clemons, who died in 2011.´

Paste is an on-line magazine that has for many years been mapping places we feel we should follow any sidetracks & detorus to reach. Paste provides a platform for superb writers like Geoffrey Himes and Eric R Danton amongst several others, and they seem to enjoy an access all areas pass when collecting information to share with their readers.

For instance, Mr. Danton tells us that ´Springsteen gave his collaborators first-rate material to work with. Many of the songs on Letter to You are meditations on growing older, and losing comrades after a lifetime of shared experiences. Yet the tone tilts more toward grateful and triumphant than morose or fatalistic. Though by definition this is a late-career album, it’s not autumnal. Springsteen, 71, is still fired up, still going full-bore as he celebrates the shared connections that music has forged in his life. The passion is there in the huge, clanging guitar riff and urgent beat on Burnin’ Train. It shows through clearly in the hazy love-struck imagery and ripping sax solo on The Power Of Prayer. It’s definitely there on Ghosts, another charged-up rocker paying tribute to long-standing friendships, when Springsteen lifts his voice amid a swell of harmonies on the chorus and declares, ´I’m alive!´

That’s one of the songs that unfolds just the way you’d hope, with all the essential E Street elements. There are bright, fiery guitars, a big chorus and, as the song heads into the coda at the end, successive layers of sound that build after Springsteen barks out one of his half-intelligible four-counts. First comes the guitar riff, then piano, followed by organ and handclaps, then saxophone and, finally, the whole band singing together on a repeating lai-lai-lai refrain. You might as well be pumping your fist in the crowd at Giants Stadium as the lights come up onstage.´

´Yet Letter to You is also a continual reminder of how good his band is. Bittan, in particular, is foundational on these songs, and practically every time there’s a musical break, he’s playing some perfect piano flourish that steers the arrangement in exactly the right direction. Bittan echoes the guitar riff on Last Man Standing, then breaks off with a melodic figure that buoys the song. Though album closer I’ll See You in My Dreams emphasizes a pair of bold guitar solos, Bittan’s accents underpin the air of hope that defines the track.

And on Song For Orphans, he plays a counterpoint to Springsteen’s vocal melody, and weaves with unprepossessing skill through steel guitar parts from Nils Lofgren, Springsteen’s harmonica and rich backing vocals from Patti Scialfa on the chorus.

Song For Orphans is one of the three older tunes, along with Janey Needs A Shooter and If I Was the Priest. All three have classic hallmarks of early Springsteen, when he wrote lyrics in torrents, but those songs fit so well with the other tracks here that it almost seems plausible that he set them aside way back when, just in case they’d come in handy for an album he would make nearly fifty years in the future. He didn’t, obviously, but their blend of Western motifs and religious imagery represents a through-line to the present by encompassing some of the themes that Springsteen has been exploring and refining his entire career.

And what an extraordinary career. Letter to You, his 20th studio album, would be a fitting capstone, though nobody expects this will be Springsteen’s sign-off,  least of all the man himself.

´We’re taking this thing ’til we’re all in a box,´ he jokes to the band toward the end of an Apple Original Films documentary about the making of the album. Springsteen is now closer to the end than the beginning, but after all those decades of running, chasing, searching, he’s finally drawn even with the spirit of camaraderie that has propelled him from the start.´

Such a stellar artist deserves to be reviewed by such a stellar journalist and Mr. Danton  concludes with the observation that Letter To You is also ´Springsteen´s letter (addressed to self), to the music and to his steadfast collaborators in the E Street Band, past and present. It’s a potent reminder that together, they’re as good as it gets.´

The writers at Paste are excellent and there are lenty more articles of quality to read on line.

So, a trusted reviewer delivered an excellent recommendation of a Letter To You by an artist the world loves and whom I admire greatly. I bought it, and have played it a number of times. It absolutely lives up to its review. The album is ecstatic and uninhibited and is a lot like the young, emerging Springsteen and the aging, but no less propelled,  Springsteen. Listen, I could play it for you,… hang on,….where is it,…what did I file it under?

I know I haven´t put in with my John Stewart stuff or Ray Wylie Hubbard. I mean, I love Springsteen and his music, but….?