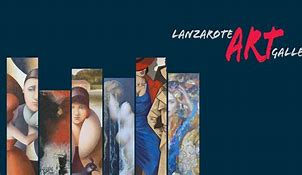 Lanzarote Art Gallery in Costa Teguise is a beautiful, uncluttered venue that privileges the work it exhibits. It has adapted very unobtrusively to covid requirements, with face-masks compulsory and the application of a hand sanitiser, as well as a sign in system at reception. Then, visitors are free to follow the discreet direction-pointers on the floor whilst wandering around, at a social distance, and admiring the works on display.

The address of the gallery, privately owned by art collector Eduardo Farina, (shown right) suggests it to be located in a shopping complex in one of the busiest tourist-spots on the island. Actually, though, it stands as the brightest diamond in a tiara on the upper floor, surrounded by classy bars and restaurants.

An artist´s creativity is not enough on its own; in order for it to develop fully, creators must see their art being recognized and remunerated. They must be able to make creativity a way of life and exercise it in freedom. And it’s at this point that art galleries come into play. Beyond being mere intermediaries, the galleries offer visual artists the space, dissemination capacity and the orientation necessary to consolidate. They are thus an essential element of a fully developed cultural sector.

At Sidetracks & Detours we, too, firmly believe that neither art, nor its artists can exist in isolation, and the above paragraph taken from Lanzarote Art Gallery´s site at

The inauguration event took place in October, but covid restrictions are causing confusion and uncertainty so the usual press sources are perhaps unsure who to inform, and even those that usually inform the press are only just coming to terms with what the future of live events might look like.

So, Dee and I didn´t learn about this until seeing a shared facebook page on Friday 5th November and therefore visited on Monday 9th November to view a collection, of ´pintura y fotografia´, entitled Volcan, by one of Lanzarote´s best known artists, Ildefonso Aguilar.

Born in Salamanca in 1945, he has lived on Lanzarote since he was eight months old. Between 1963 and 1968 he studied and graduated at the Santa Cruz de Tenerife Graduated Fine Arts School as Drawing and Painting Professor. He then worked as a drawing and modelling Professor at the Arrecife Applied Arts and Artistic Trades Schoolon Lanzarote. During that period Ildefonso worked on a number of audio-visual projects about Lanzarote, using photography, sound and video. Over a three year period he travelled to various countries working on comparable audio-visual undertakings.

Until 1985 he also worked as director of the Cultural Department of The Cabildo (Lanzarote government), Aguilar effectively designed the musical ambience for the arts, tourist and culture centres on Lanzarote. Such venues include Jameos del Agua, Rufa de los Volcanes, Cueva de los Verdes and Jardin de Cactus.

The artist left that post to exclusively focus on his art but has also collaborated as a consultant with various cultural and artistic projects with different public institutions on the island.

He was commissioned in 1983 by the Cabildo de Lanzarote to become the Artistic Manger of The Ruta de Janubio landscape recovery project, which not only included the installation of a sound system of geological sounds in the crater at Golfo, but also resulted in the wonderful views we can see of the slat fields below as we drive down to or out of Playa Blanca, directly below Las Brenas. (Sidetracks & Detours has previously reported on this area in our archives in the story Sara Of The Salt Fields.)

In 1989 he inaugurated the Lanzarote Music Festival (and has worked with the Festival every year since) and ten years later he completed and finished the second phase of the Art, Culture and Tourism Centre Casa del Campesino. originally created by the late Cesar Manrique, another artist about whom there is plenty to read in our Sidetracks & Detours archives).

In 2012 Ildefonso was appointed Academic Numerary member at San Miguel Arcángel Royal Fine Arts Canarian Academy (for the Painting section) and in 2015 he was awarded The Golden Medal by the Government of The Canary Islands. The following year he was granted Consulting Board accreditation honouring members of the Art, Culture and Touring Centres of the Cabildo of Lanzarote. He was therefore named a Son Of Lanzarote.

Ildefonso Aguilar (seen here, right, at work) uses painting as the main platform of his expression, around which other media for expression  are developed, such as music, photography, installation and intervention in natural spaces. His work seems to blossom from the landscape and then reflect the nature of the island of Lanzarote on which he has lived for so long. His research over recent years has seen him comparing and contrasting that landscape with that of Iceland with their similarly naked landscapes, austere and of great strength and plasticine beauty and all this serves as a fundamental basis for the development of his work. In his interpretation he ´abstracts the essential´ synthesizing and sublimating them in the pictorial techniques he uses of materials and natural sands of the island itself, which instil into the work textures and nuances difficult to obtain with other methodologies.

In his busy life, Ildefonso has edited catalogues, books and photographic collections as well as musical recordings.

He has also designed original graphic pieces for posters, books and albums and whilst doing all this he has held on-going individual painting and photography exhibitions as well as placing arts interventions on the landscape, whist also creating multi-media installations and audio-visual projects.

We are fortunate enough to have seen film footage of Ildefonso working alone on a major art work and watched him working on a canvas laid flat on the ground as he applied natural elements of stone and sand, with a large sweeping brush, on to his painting. We wondered how he could have predicted what the final outcome of that might but the friendly, articulate and extremely knowledgeable guide showing us around that exhibition, Estefania Comojo, said the artist had told her he always works with a clear pre-determined image in his head and is sufficiently skilled by practice having made perfect to achieve that image.

Several of the works in that exhibition at Cic El Almacen of two or three years ago are re-included here, making a very different, but just as dramatic an impact.

Here, The Lanzarote Gallery was neatly laid out and the paintings were all in privileged positions and complemented by sculpted works by another artist.

The Exhibition is a selection of works curated by Ildefonso Aguilar, in a collection dedicated to consolidated Contemporary Art, aimed at art lovers and national and international collectors. Lanzarote Art Gallery offers visitors to see for themselves the gravitas of the work produced by one of the most established practitioners in the Art of the Islands and specifically Lanzarote.

All the paintings were titled and priced and had been made available for sale, but although I love his work and the methodology behind it, the pieces produced are invariably showing the harsh grandeur of Lanzarote rather than the more accessible, and affordable, art that many people enjoy.

We were already familiar with some of the art-works collated but there were also a number of Ildefonso´s more recent work included, too.

Among them was a work that seems to be ubiquitous as we are familiar with it from so many live exhibitions in venues such as The Cabildo building and Cic El Almacen in Arrecife and from seeing copies in so many books and catalogues. La piel del paisaja 3 is a huge piece that seems to me to speak to both the strength and frailty of Lanzarote, showing what seem to be solid layers of different rock strata, but with a fissure very noticeably opening along one of the seams. reminding us where the fire and the lava and the heat burst through in the eruptions of the seventeen hundreds that changed and re-shaped the island.

Photography plays such a large part in Ildefonso´s work, too, of course and I was particularly fascinated by some works I don´t recall seeing before, two of which were numbers 2 and 7 from a series called Horizontes that served as a contrast to his depictions of heights and depths on the island. Instead these looked out to a calm sea from a flat shoreline or over one of the many vast tracts of plain and plateau on the volcano fields.

There were other especially interesting works, called Basalto, numbers one and two, on which large pebbles had been tightly adhered to the flat surface of the actual art-work, creating a fascinating dimensional effect.

The artist seems to label some of his most dramatic (if foreboding) works as being as fragmentos or fragmentados. These are sometimes dark and portentous, seemingly separated by natural dividing lines but the eerie terror we might feel is inevitably tempered by Aguilar´s obvious love and respect for this demanding landscape. His love of the natural beauty of his island shines out of the darkness of his work.

It was also interesting to note two paintings framed in planed, light wood, each three times or so wider than they were deep, and it was noticeable how even this somehow reduced the tension and showed his work in a different perspective.

The work of Ildefonso Aguilar would grace any gallery or large domestic residence. Owners would not only have wonderful art work to hang but also would be showing an authentic representation of Lanzarote´s natural history.