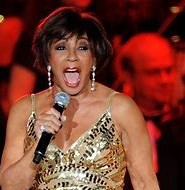 with new album, I Owe It All To You

The title of the new collection from Dame Shirley Bassey quotes her as saying I Owe It All To You (left). Sadly it is described in Decca´s press releases as a grande finale from a lady who first went into a recording studio in 1957. She has, of course a hard-earned right to call it a day, but Tim De Lisle in his review in The Mail On Sunday of November 1st 2020 mischievously reminds us that in show business, ´finale´ is just another word for encore. To pour a little fuel on that fire, it also has to be said that the album shows Bassey to be still in fine vocal form, even at the age of 83.

Her strong voice even now rebukes the primary school teacher who once told her to ´back off´ during choir practice. Even now, if a track of this album were to be played on the radio with no introduction you would still recognise that voice as soon as you heard it.

From Broadway standards, (and she has performed and recorded so many of those) she has moved on to Bond themes, (and how poignant, somehow, that the release of this album coincides with the death of Sean Connery). This is an accomplished, stylish recording.

De Lisle pens a sentence to describe the singer and this album  that will surely make its way, (if it hasn´t already) way on to some imminent p.r. output. Of the album he says, ´ít´s classy, it´s brassy, it´s sassy,…it´s Bassey !´

After a 30-second overture the first track proper is Who Wants To Live Forever by Queen. It takes guts to cover Freddie Mercury – and lungs. First purring, then roaring, Bassey makes the song her own.

The tracks that follows are quite unlike Queen but all are very like this Dame. She roams from music associated with Barry Manilow to the modernity of Beyoncé, from John Miles to Albinoni, from Lady Gaga to Charlie Chaplin (a superb remake of Smile, putting on more than a brave face). This particular song is, surely, one of the most uplifting aphorisms ever recorded; right up there with Always Look On The Bright Side Of Life.

Bassey’s charisma comes laced with reality: like another Welsh legend, Tom Jones, she started out working in a factory – making gloves in his case, munitions in hers.

There are a couple of mis-hits. Her cover of Always On My Mind only goes to prove that nobody can really match classic version by Elvis Presley. A re-recording of  her own Ain’t Heard Nothing Yet doesn´t actually match up to her own earlier version

The song is not to be confused, of course,  You Ain’t Seen Nothing Yet by Bachman-Turner Overdrive: but come to think of it, that is a song she really could do justice, I reckon.

The only new song is the title track, written by Don Black, (left) who gave her Diamonds Are Forever. A natural-born showstopper, I Owe It All To You is My Way with less grandstanding and more gratitude. A song for someone more humble than Frank Sinatra.

In a spoken introduction Bassey confesses that her fan base ‘has (always) been my bread and wine.’

It only adds to the suspicion that she’ll be back. Though she has given us such a career and such a catalogue of amazing interpretations that she could call her follow up album I Don´t You Any More and it would be very appropriate.

It is we who are in debt to her.

In Praise Of The Poets: James Nash