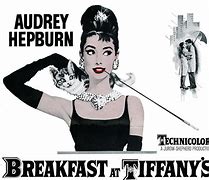 Breakfast at Tiffany’s  was a 1961 American romantic comedy film directed by Blake Edwards and written by George Axelrod, loosely based on Truman Capote‘s 1958 novella of the same name. Starring Audrey Hepburn and George Peppard, and featuring Patricia Neal, Buddy Ebsen to my generation always Ged Clampett of The Beverley Hillbillies), Martin Balsam, and Mickey Rooney, the film was initially released on October 5, 1961, by Paramount Pictures.

Hepburn’s portrayal of Holly Golightly as the naïve, eccentric café society girl is thought by most to be one of her most memorable and identifiable roles. Hepburn regarded it as one of her most challenging roles, since she was, in real life an introvert, here being required to play an extrovert.

Breakfast at Tiffany’s was received positively at the time, and won two Academy Awards: Best Original Score and Best Original Song for “Moon River“, which was also selected as the fourth most memorable song in Hollywood history by the American Film Institute in 2004. The film was also nominated for three other Academy Awards: Best Actress for Hepburn, Best Adapted Screenplay, and Best Art Direction.

In 2012, the film was deemed ´culturally, historically, or aesthetically significant´ by the United States Library of Congress and selected for preservation in the National Film Registry.[3]

The plot of the film begins early one morning, and follows a comical, almost Whitehall-farce style after a taxi pulls up in front of Tiffany & Co. and from it emerges elegantly dressed Holly Golightly, carrying a paper bag containing her breakfast.

Time magazine noted that ´for the first half hour or so, Hollywood’s Holly (Audrey Hepburn) is not much different from Capote’s. She has kicked the weed and lost the illegitimate child she was having, but she is still jolly Holly, the child bride from Tulip, Texas, who at 15 runs away to Hollywood to find some of the finer things of life—like shoes.´ the magazine´s review pointed out that ´after that out-of-Capote beginning, Director Blake Edwards goes on to an out-of-character conclusion´.

Almost a half century later, Time commented on the pivotal impact of Hepburn’s portrayal of Golightly:

Breakfast at Tiffany’s set Hepburn (left) on her nineteen sixties Hollywood course. Holly Golightly, small-town Southern girl turned Manhattan trickster, was the naughty American cousin of Eliza Doolittle, Cockney flower girl turned My Fair Lady. Holly was also the prototype for the Hepburn women in Charade, Paris When It Sizzles, and How to Steal a Million: kooks in capers. And she prepared audiences for the ground-level anxieties that Hepburn characters endured in The Children’s Hour, Two for the Road and Wait Until Dark.

The New York Times called the film a ´completely unbelievable but wholly captivating flight into fancy composed of unequal dollops of comedy, romance, poignancy, funny colloquialisms and Manhattan’s swankiest East Side areas captured in the loveliest of colors´ In reviewing the performances, the newspaper said ´Holly Golightly is as implausible as ever. But in the person of Miss Hepburn, she is a genuinely charming, elfin waif who will be believed and adored when seen. George Peppard is casual and, for the most part, a subdued citizen who seems to like observing better than participating in the proceedings. Martin Balsam makes a properly brash, snappy Hollywood agent. Mickey Rooney’s bucktoothed, myopic Japanese is broadly exotic. Patricia Neal is simply cool and brisk in her few appearances as Mr. Peppard’s sponsor and Vilallonga, is properly suave and Continental as Miss Hepburn’s Brazilian, while Buddy Ebsen has a brief, poignant moment as Miss Hepburn’s husband´.]

Truman Capote reportedly hated Hepburn in the lead part. Capote biographer Gerald Clarke deemed the film a “valentine” to free-spirited women rather than a cautionary tale about a little girl lost in the big city. The movie is a confection — a sugar and spice confection´.

On review aggregator, Rotten Tomatoes, the film was given an approval rating of 88% based on 51 reviews, with an average score of 7.43/10. The website’s critical consensus read, ´It contains some ugly anachronisms, but Blake Edwards is at his funniest in this iconic classic, and Audrey Hepburn absolutely lights up the screen´.

In August 2020 we heard the first reports that some of Hollywood legend Audrey Hepburn‘s personal belongings are going up for auction.

A collection of Hepburn’s clothing, as well as additional treasures associated with the star, will be presented in London on September 27.

¨We are thrilled to have been entrusted with the sale of items from Audrey Hepburn’s personal collection´, Adrian Hume-Sayer, director of private collections at Christie’s said in a press release. ´Her name is one that instantly resonates; her appeal and relevance remain as strong today as they ever were´.

The sales will offer fans and collectors alike the opportunity to acquire unique personal objects´, Hume-Sayer continued, ´which have never before been seen on the market and which will undoubtedly offer new insights into the remarkable life of a remarkable woman´.

The items were given to Christie’s to auction by Hepburn’s family.

A powder compact with the monogram “AHF,” for Audrey Hepburn Ferrer, opens to reveal single compartment with a mirror to the lid and with original black slip case is estimated at $5,100 to $7,600.

Original, professional photography of Hepburn will be up for auction as well. The live auction begins in London on September 27. The online auction takes place from September 19 to October 3.

Perhaps one of the most exciting item up for grabs is Hepburn’s working script for “Breakfast at Tiffany’s.” The script, dated August 3, 1960, includes handwritten annotations made by Hepburn herself. Featuring the author’s more than 150 edits throughout, the 84-page document, first submitted to Random House in May 1958, garnered 16 bids total and was last sold at Boston’s RR auction in April 2013 for $306,667. According to Sotheby’s description of the lot, this version of the script is the first instance naming Audrey Hepburn’s iconic character, Holly Golightly, who until the final draft was known as Connie Gustafson. Few literary manuscripts of the same calibre attributed to Capote remain in private hands. Another draft resides in the writer’s archive at the Library of Congress.

The character of Holly Golightly is of course the heart of Breakfast at Tiffany’s, and the most striking change made by Capote in this draft relates to her´, said Dr. Gabriel Heaton, Sotheby’s Specialist in Books and Manuscripts, in a statement following the sale.

Sotheby’s cataloguing of the lot included Capote’s explanation of his fleeting protagonist. ´She was such a symbol of all these girls who come to New York and spin in the sun for a moment like May flies and then disappear´, said Capote in a Playboy interview. ´I wanted to rescue one girl from that anonymity and preserve her for prosperity´. (He perhaps meant posterity, but was thinking of prospective income-generation at the time?)

Featuring the author’s more than 150 edits, the 84-page document, first submitted to Random House in May 1958, was last sold at Boston’s RR auction in April 2013 for $306,667; here, it garnered 16 bids total. According to the Sotheby’s description of the lot, this version is the first to name the iconic protagonist Holly Golightly, who until the final draft was known as Connie Gustafson. Few literary manuscripts of the same caliber attributed to Capote remain in private hands. Another draft resides in the writer’s archive at the Library of ´

´The character of Holly Golightly is of course the heart of Breakfast at Tiffany’s, and the most striking change made by Capote in this draft relates to her´, said Dr. Gabriel Heaton, Sotheby’s specialist in books and manuscripts, in a statement following the sale. ´Undoubtedly one of the great names of modern comedy, it is as magnificently implausible as its owner and connects to her character in a number of ways: ‘Golightly’ reflects the lightness with which she treats the world, her lack of attachment to place, and perhaps hints at promiscuity; whilst ‘Holly’ will prickle if you get too close´.

That´s a very expensive breakfast. I think I might just have the scrambled eggs !

DYNAMITE BLOWS UP THE CHARTS