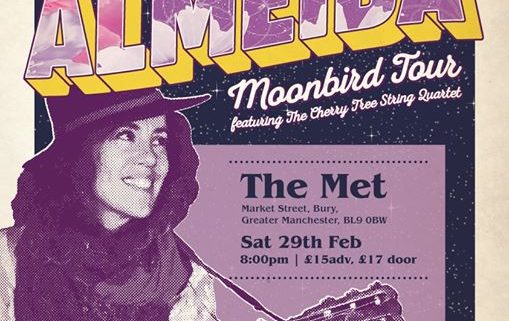 Kirsty Almedia, and her band The Troubadours, played a selection of Winter Songs one evening, a few years ago, that warmed the hearts of a large audience that had turned out on the frostiest of evenings when, truly, ´the weather outside was frightful.´ I found her to be refreshingly quirky and courageous enough to insert many of her own songs amongst an excellent selection of songs made famous by others, such as the ubiquitous and absolutely appropriate for the evening, White Christmas and Winter Wonderland as well as a gorgeous, ethereal and quite unforgettable interpretation of Joni Mitchell´s River. After my wife had lent the band her jump leads to start their van after the concert I felt like, having just listened to an angel, I was soon to be following a star to HMV, where I would purchase the Kirsty Almeida CDs that I knew my wife would be delighted I had bought her. I later interviewed Kirsty for my all across the arts page in The Rochdale Observer, but it dawns on me now that I have been severely negligent in not bringing her fantastic work to these pages.

Kirsty Almeida is a UK-based singer-songwriter who has released four albums, the latest being Moonbird, released earlier this year. Her broad influences include folk, pop and jazz but are further strongly and uniquely shaped by her own global heritage. Because her father worked internationally, she grew up in the Philippines, Brunei, Venezuela, the US and Gibraltar.

After gaining a degree in Popular Music Studies at Bretton Hall, a college of the University Of Leeds, Kirsty recorded her debut album for Decca. Pure Blue Green, was released in 2010, to strong critical acclaim.

It was recorded at the Arc Studios, owned by Terry Britton, in London, and produced by the legendary Youth, founding member and bassist of the band Killing Joke. John Ellis, a musician we have previously interviewed on these pages, (and who will festure on these pages in tomorrow´spost) was both multi-instrumentalist and assistant producer on the album and Kirsty Almeida herself had a co-producing credit.

She found the results of Decca´s ‘speed producing’ very satisfying and recalls that ‘My A&R man said I would just “know” when I met the right producer and I definitely had a strong feeling Youth was the right one. Compared to Youth, all the other producers seemed very safe.

With Youth, we found a common love of song. I felt like I really wanted to play my songs for him; I wanted him to be proud of my songs. I wanted to impress him. That´s what made me feel he was the right person. He was perfect for getting the right vocal out of me’

A noted track on a richly diverse collection of songs was ‘Spider’, re-mixed by DJ Mr Scruff.

There were also two EPs for Decca from film soundtracks. Albatross (2011), featured four original songs linked to a movie release of the same name, and Patagonia (2011), was a two-song set.

After departing the major label and setting out on a new independent course, Almeida recorded and released the 2012 album Wintersongs.

Recorded at Limefield Studios in Middleton, Manchester, it came out on the singer’s self-established label All Made Up. This was the album Kirsty showcased at that concert I saw in Heywood with her Troubadours band, that on that evening included the aforementioned John Ellis. The track Cold Lonely Blue gave a clue to the composer’s state of mind at time. She states: ‘It was actually a song inspired by Seasonal Affective Disorder (SAD). I wanted to make a warm album about the festive season – something you could cuddle up to. Cold Lonely Blue was a song about the moments in the belly of the dark winter months where it seems it’s never going to end. That also felt important to bring to a Winter’s album.’

Having regained ownership of the Pure Green Blue recordings, in 2014, she compiled an artist re-mix of the whole album and released it under the title Déjàvoodu, again on the All Made Up imprint.

In 2014, Kirsty Almeida put her musical career on hold to give birth to her son and consequentially heal from PTSD and post-natal depression, which saw her leave the stage for 5 years, but not before she had recorded a number of songs which would lie dormant for some significant time. During this time Kirsty took on a major project to revive an abandoned mill in the centre of Manchester as an arts and wellness centre, The Wonder Inn.

These dormant compositions form a significant part of the new album Moonbird, released in February 2020 on All Made Up. There are also several more recent songs –Dance With Me, Into The Light and I’m Going to Love You among them.

The production is jointly overseen by Kirsty Almeida and bass player Matt Owens. She remarks: ‘The album feels very much like a bridge from my old life into my new one.’

Actually I find that description really resonating with me, and I think pretty much all my favourite albums might be described in that way. That certainly seems to fit so many of my albums by Townes Van Zandt and Guy Clark, for example.

Responses to Kirsty´s latest album have been positive and her absence from the scene has actually helped to generate media interest as she returns to live performance. Commenting on Moonbird, rock critic Simon Warner says: ‘The new record displays an eclectic richness but also an artistic unity because, throughout, the production, mixed supremely by Grammy award-winning Jerry Boys, is understated and never crowds out the principal heartbeat of the songs – Almeida’s utterly distinctive voice.’

My own immediate responses to Moonbird were to its perfect production values, the music that that is somehow majestic and minute, with every faint tinkle and trill adding to the overall beauty. The vocals are understated but insistent and invite comparisons, that I feel Kirsty rises above, with the likes of Tori Amos, Katie Melua and even Norah Jones. I feel the opening song, Josie Brown, lovely though it is, might be a little introspective for an opening number but the second track includes a wonderful line in ´you make my heart reach´ which seems to me to speak of how empowering being loved can be. The highlight of the album for me is Dance With Me, a song that sometimes rises and falls almost like something from The King And I but that in other parts turns its command of a title into a tentative request. The playing by the musicians on this, and all the tracks, is exquisite and the arrangements follow our expectations but also seem to nip off down sidetracks & detours every now and then, making this a perfect album to feature on our blog.

Kirsty had started to tour the album prior to lockdown in the UK with a date scheduled at Bury Met (see cover photo) a venue for local and international artists alike, and where I once heard the wonderful American Cajun ensemble Beausoliel. It must have been frustrating to have her new album already to take out on the road, only to see signs saying ´road ahead closed´ but it seems from her lively face-book page that Kirsty will be straight out of the gates now the gates are carefully unlocked.

If there is then any justice left in this world for musical excellence and integrity then this singer I first interviewed almost ten years ago will surely go on to earn the same respect from a new audience that I had for her then, and still hold for her today.

AT THE ART OF BLACK LIVES MATTER