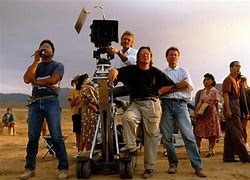 Sir Alan Parker was twice Oscar-nominated for best director, for 1978’s Midnight Express and for 1988’s Mississippi Burning. While the director’s subject matter was eclectic, he did return frequently to the musical form: His films Bugsy Malone, Fame, Pink Floyd The Wall, The Commitments and Evita were all musicals or had strong musical elements in one form or another.

Parker’s first feature film, 1976’s Bugsy Malone, made a considerable splash for an audacious concept that worked only because everyone kept a straight face. Cast entirely with children, the oldest perhaps only 15, the film was a Depression-era gangster musical that introduced actors including Jodie Foster and Scott Baio. Instead of bullets, their machine guns sprayed whipped cream.

The New York Times said: ´That custard pies can maim and whipped cream should kill are only two of the ways in which some basic laws of the cinema are cheerfully junked in this wildly uneven but imaginative and stylish satire of 1920’s gangster movies. … which also includes a first-rate musical score and choreography, along with a cast of kids´.

It surprised many that the man who had directed Bugsy Malone could, only two years later, lead a film as powerful as 1978’s Midnight Express, which was, after all, the harrowing true-life story of a man, Billy Hayes (played by Brad Davis), sent to a nightmarish Turkish prison for smuggling hash. The film, which competed in Cannes, won the adapted screen Oscar for Oliver Stone and best original score for Giorgio Moroder, and it was nominated for best picture, director, supporting actor (John Hurt) and film editing. Critic Roger Ebert said at the time that Parker had ´succeeded in making the prison into a full, real, rounded world, a microcosm of human behaviour´.

Next, and very far indeed from Midnight Express, was the 1980 film musical Fame, the story of the students and teachers at New York’s High School of Performing Arts that won Oscars for original song and score and was nominated for four more. It also spun off a hit title song as well as a TV series, a stage musical and a 2009 film remake.

Parker´s next direction saw him take another detour with the 1982 Bo Goldman-scripted film Shoot The Moon, about the disintegrating marriage of a couple played by Albert Finney and Diane Keaton. Finney’s successful writer and Keaton’s earth-mother live in a farmhouse in Marin County with their four small daughters. Shoot the Moon also competed at the Cannes Film Festival.

Also in 1982, Parker saw the release of Pink Floyd The Wall, which was not a concert film. In fact, Variety magazine described the $12 million production as ´an eye-popping dramatisation of an audio storyline. Their article also noted that ´being a visual translation of a so-called ‘concept’ album, the picture worked extremely well in carrying over the somber tone of the LP.´

I actually remember discussing with all my mates what the picture had got right, or wrong, for each of us in showing us an interpretation of music for which most of had a head full of our own visual interpretations.

Birdy (1984), starring Matthew Modine and Nicolas Cage, followed two friends who return from the Vietnam War. Birdy, played by Matthew Modine, has always been obsessed with birds and flight, but is mentally unstable after the war and in a seemingly birdlike state, while his friend Al (Cage), who returns from the war with grievous injuries, spends their time together in a veterans hospital attempting to coax Birdy from his regressive state. Flashbacks depict their relatively normal friendship prior to the war.  Birdy landed the Cannes Grand Jury Prize in 1985.

Angel Heart (1987), was a highly effective, atmospheric horror mystery film starring Mickey Rourke, Lisa Bonet and Robert De Niro, centred around a New York private detective (Rourke) hired by a mysterious De Niro, who plunges him into a case that leads Rourke’s detective to the eventual realization that the missing singer he is seeking is in fact himself — and that he has quite literally sold his soul to the devil. (This echoes so many of the tales we recently explored about blues man Robert Johnson, in our week long celebration of the current Bob Dylan album in July).

Parker followed Angel Heart with Mississippi Burning, a film that I remember thinking was very important at the time.

Telling a factional story of two FBI agents, played by Gene Hackman and Willem Dafoe, sent during the 1960s to investigate the murder of civil rights workers to a Southern town, we the audience felt similarly frustrated by the conspiracy of silence of the townsfolk.

Hackman’s character (a former sheriff) is a pragmatist, while Dafoe’s the idealist. The film won an Oscar for cinematography and was nominated for best picture, director, actor (Hackman), supporting actress (Frances McDormand) as well as sound and film editing.

The director made another ´issue´ picture in 1990’s Come See The Paradise, which he also wrote. The film explored the injustice done to Japanese Americans at the beginning of World War II, when they were forcibly interned in camps. Starring Dennis Quaid and Tamyln Tomita, Come See the Paradise again competed at Cannes.

Very different indeed was his next film, The Commitments, based on the novel by Irishman Roddy Doyle. This is actually still the favourite film of my son Andrew, who would have been thirteen or fourteen, when it was released. Nominated for an Oscar for best editing, the film concerned a band whose members are drawn from the poorest quarters of North Dublin who decide they’ll play soul music. Roger Ebert called it ´a loud, rollicking, comic extravaganza” in which the director ´´introduces a Dickensian gallery of characters, throws them all into the pot, keeps them talking, and makes them sing a lot. The film’s appeal was simple, but its fans were very enthusiastic. And all this makes nothing of the incredible soundtrack of Stax and soul hits.

The Road to Wellville (1994) was also a comedy — a health-care comedy set at the beginning of the 20th century, when mainstream medicine was still primitive and there were therefore all sorts of fellows plying their trade according to one untested theory or another. One such particularly odd duck was Dr. John Harvey Kellogg, who invented the corn flakes and treated people at a retreat in Battle Creek, Michigan. Down this rabbit hole go a couple played by Matthew Broderick and Bridget Fonda.

Unlike Parker’s other musical projects, Andrew Lloyd Webber and Tim Rice’s Evita was an already existing property, with those who loved or hated it having formed their opinion years earlier, based on theatre productions and soundtrack albums, leaving a vast area of no-man´s land in between, before Parker put his hands on the film adaptation. The casting of  Madonna in the title role further polarized opinion, with Jimmy Nail also a surprise and successful casting. The new song Lloyd Webber and Rice wrote for the movie won the Oscar for best song, and the film was Oscar nominated for film editing, sound, cinematography and art direction.

Based on Frank McCourt’s bestselling book recounting his monumentally tragic childhood in Ireland, Parker’s 1999 adaptation of Angela’s Ashes was Oscar-nominated for John Williams’ score, but critics felt it fell short as an adaptation of the Pulitzer Prize winning novel.

Parker’s final film, The Lives Of David Gale, starring Kevin Spacey, was a thriller that toyed with addressing the issue of capital punishment. Though it played at the Berlin Film Festival, it did not garner the attention of his earlier films.

Alan William Parker was born in Islington, London. He began his working life in the advertising industry, becoming a top copywriter at London’s Collet Dickinson Pearce (CDP) advertising agency in the late sixties and early seventies.. Parker began his film career through his association with David Puttnam, a fellow ad man also aspiring to make movies, who hired Parker to write the screenplay for the pre-teen romance Melody (1971). For a time he directed TV commercials and short films for the BBC, winning a BAFTA TV Award in 1976 best single play for BBC TV movie The Evacuees (1975).

The same year Parker made his first movie, Bugsy Malone, and never looked back.

He took a realistic view of his own work and told The British Film Institute in 2003 that ´I can’t change people’s minds. I only have two hours to talk to anybody in the audience about whatever my particular point of view is. So all I can do is provoke debate. The films that I do tend to polarise people’s views. But hopefully people will talk about the film when they leave here. That’s the most I can ask for.´

Nevertheless, ten years later, in 2013, Parker won a prestigious Academy Fellowship from BAFTA after receiving numerous nominations over the years,

Parker won BAFTAs for the screenplay to Bugsy Malone, for direction of Midnight Express and for best film and direction for The Commitments.

At Poland’s Camerimage, the International Film Festival of the Art of Cinematography, he shared the cinematographer-director duo award with his lenser Michael Seresin in 2007, and the following year he won a special award for a ´director with unique visual sensitivity´.

He was also a founding member of the Directors’ Guild of Great Britain.

Parker was twice married, the first time to Annie Inglis from 1966 until their divorce in 1992. He is survived by second wife Lisa Moran, who had producing credits on several of Parker’s films; and four children by Inglis, including sons Alexander Parker and Jake Parker, an orchestrator and composer.

Film industry note-worthies have spoken in high praise of him. Fellow director Edgar Wright has posted; ´So sad to hear of Sir Alan Parker’s passing. His incredible run of hits as a British filmmaker gave immense inspiration to me: Fame, Midnight Express, Birdy, Angel Heart & his beguiling debut Bugsy Malone (one I’ve parodied twice & want the last song to be played at my funeral.)´

Sir Andrew Lloyd Webber (right) has said he is ´very sad to hear the news of Alan Parker’s death. He was my friend, and collaborator, on the Evita movie and one of the few directors to truly understand musicals on screen.´

Actor Matthew Modine was similarly ´so very sad to share the news of the passing of my dear friend, Sir Alan Parker. Being cast in his epic film, Birdy, transformed my life. Alan was a great artist who’s films will live forever. Godspeed, Sir Alan.

Fellow actor Ben Stiller also spoke in moving tones. ´So sad to hear of Alan Parker´s passing. This great director made what I callo ´real movies´. He inspired so many film-makers: Fame, Midnight Express, Mississippi Burning, are some of the best films of the seventies and eighties´.

Sir Alan Parker, shown below (in the black shirt) shooting on location, has passed away at a time when, arguably, the industry he loved is struggling for survival. Whilst cinemas remain pretty much closed around the UK (and here on Lanzarote) why not dig out your DVDs or stream or Netflix or whatever it is you young people do these days? Let´s order in the chicken nuggets, or popcorn, and watch some Alan Parker movies that remind us what a great medium film can be. I´m pretty sure my son in Seoul, South Korea will be watching The Commitments being zapped direct to his wrist watch or mobile phone or some such and I´ll be here watching a jumpy, grainy second generation video cassette copy of Mississippi Burning. Wherever you watch an Alan Parker film, though, and whichever film it is on whatever device, there will evidence a-plenty of how much the director contributed to modern cinema.