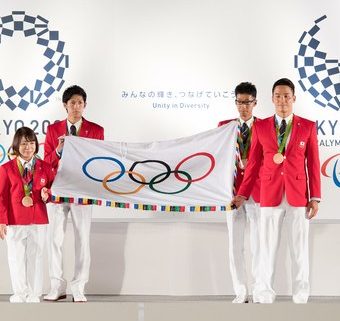 ARTS & SPORTS MUST FIGHT TOGETHER

The Rochdale Multi-Faith Partnership organised fun events outside Veena’s Restaurant in Heywood, Greater Manchester, to see the procession of The Olympic Torch prior to the 2012 London Olympics. Multi-Cultural Arts And Media and volunteers from Falinge Hub, among others, helped entertain huge numbers gathered to see The Passing Of The Torch.´

Rain and thousands of people poured into Heywood to glimpse The Olympic Torch as two men, with damp clipboards, sodden questionnaires and soggy pencils, roamed around asking questions. It might have been assumed the two were Health and Safety inspectors, but their t-shirts declared them to be Just Poets.

I was one of those two men and the other was my partner in rhyme, Robin Parker. And we were also working with The Rochdale Multi-Faith Partnership, seeking to create Heywood’s longest ever poem to commemorate the day The Olympic Torch came to town.

We spoke to mums and dads and sons and daughters, grandparents and grandchildren, local people and visitors, policemen, priests and politicians, asking only three simple questions about what The Olympic Torch symbolised, what the Olympic Games meant and personal opinions of Heywood.

Nobody seemed to mind our intrusions.  They gave us a five hundred line poem reflecting not only a keen sense of anticipation of the Olympic Games but also Heywood’s sense of inclusion, gained from The Olympic Torch being carried down our streets. What was wonderful, and slightly unexpected, was Heywood’s positive self-esteem. Everyone spoke enthusiastically about local parks, markets, memorial gardens and libraries, and many described Heywood as an ‘honest’ town.

Residents of Heywood and visitors to and from the rest of the Borough subsequently had opportunities to read the words so many had contributed to.

´The poem was displayed at key library locations,´ recalls Robin, ´such as local libraries, and was on display for several weeks in the Heywood branch, and community bases. There were live readings at local arts or literary festivals such as The Lexicon later in that year. Just Poets released copies to the press about how so many local residents, councillors and celebrities had contributed all the lines of the poem, making it a good soft-news  story.´

The poem, called The Passing Of The Torch, also became something of an educational tool and inspiration for new writings. Over the next year or two Robin and I, as Just Poets, rolled out this methodology across Rochdale MBC as a way of seeking opinion in a new style of consultation, and involvement.

This vox pop question and answer methodology seemed to allow people the freedom to speak their mind. Many responses were poetic and some profound and most were full of promise.

Of course, some were downcast, even defeatist but, certainly with The Passing Of The Torch, we acquired a representative and incredibly positive viewpoint on a day when it would have been easy for people to huddle under their umbrellas in disgruntlement.

Our own all across the arts page carried the story of the creating of the poem and that article was reproduced in a  show format on Crescent Community Radio 97 FM by my co-presenter Steve Bewick and I and included readings of particular verses by representatives from various of our Borough´s Asian communities, too. It was Steve who recorded and produced the poem in cd format that we were able to place in all the schools and libraries around the Borogh

´We knew we could never get all the contributors back together,” said Robin at the time, ´so it was great that Steve was there under a gazebo to record the piece for posterity, so any local film makers thinking of recording this Olympic summer could use the poem as an intriguing soundtrack.´

However, Just Poets also performed the weekend following their consultative poem writing at a Link4Life Big Games event at The Middleton Arena. Robin Parker delivered his own version of Noah’s Ark and Three ‘Alfpence A Foot, made famous by Stanley Holloway, whilst Norman took volunteer children on an imaginary trip to Blackpool Zoo with Holloway’s version of The Lion And Albert. The late Lorraine Charlesworth delivered original work as a Just Poets’ guest reader and Touchstones Creative Writing Group member John Leach read a newly written piece about the British Olympian Lillian Board, (left) a ´Team GB´ runner at the 1964 Olympics in Tokyo, who died a couple of years afterwards at a tragically young age.

So, a five hundred line poem about The Olympic Torch inspired a tribute to a fine young athlete, written in the following week. Who says that sport and the arts don’t engage with each other?

We print these memories today, as sport and art are stepping out of lockdown but playing behind closed doors or showing on video instead of in open galleries. Not only do Sport and the Arts again need, more than ever, to closely engage, but also nations, towns, communities and we all as individuals must work together to strive towards not only a ´new normal´ but to a ´better normal´ and to more closely cherish so much of a way of life we nearly lost, and to ensure that arts and cultural life-style will be less taken for granted.

In the couple of years before lockdown we were hearing a lot of phrases like ´elite sport´ and ´high art´. Now, though, with so many galleries having taken the opportunity to put their collection on line in readable and approachable formats they likely to draw engagement with ´virtual´ visitors and enjoy a manageable contact list with ther client base. The sports that have recently played in empty stadiums, devoid of atmosphere, have reminded us just how important the everyday fan is to élite sport.

There is a chance that arts and sport, fighting together, can again be taken to heart by the people rather than by the money men.

WRITING IN SEARCH OF A STORY