Blog
You are here: Home1 / Blog2 / AATA3 / FROM LOCKDOWN TO CLOSED FOR REFURBISHMENT 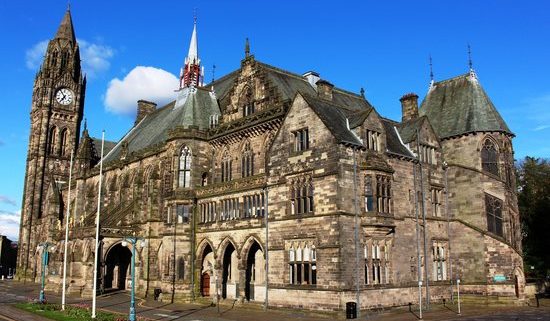 TO CLOSED FOR REFURBISHMENT

Graham Marshall, an occasional contributor to these pages, (see left) and Dr. Joe Dawson were pretty much the leading proclaimers in the Borough for classical music, each writing regularly in various outlets like church pamphlets, music society programmes or even The Rochdale Observer. Today´s post is threaded together from reading reports by Graham and Dr. Joe of a recent ´virtual´ recital they both saw.

Graham watched and listened in his living room to the lunchtime organ recital given by Jonathan Scott in Rochdale Town Hall recently, and shared his reaction with his facebook following. His post told us that ´the instrument itself, of course, is quite remarkable: It was built in 1913 by J.J Binns of Bramley Leeds and was donated to the town by Alderman Sir Samuel Turner J.P. (1840-1924) former Mayor of Rochdale and local businessman and philanthropist. On Saturday 2nd November 1912 The Rochdale Observer announced ‘NEW ORGAN FOR THE TOWN HALL’ accompanied by a full description and a sketch of the proposed instrument.

´The organ will occupy the recess at the back of the platform and will be, as was expected, an instrument worthy of the donor, and of the town.´ It was reported that “Alderman Turner has been advised by a committee of organists of the borough including Mr. B. C. Crossley (Organist at the Parish Church), Councillor Diggle, Mr James Duckworth, J.P., and Mr T. Elvyn Kershaw. J.J. Binns of Bramley, Leeds was the chosen builder.´

It is worth noting that Sir Samuel Turner’s place of worship, the former Baillie St. Methodist Church, had previously had a large instrument built by Binns in 1892.´

So that opening to Graham´s fb post sent me scurrying to my search engine for background information.

I learned that James Jepson Binns was one of the most prolific organ builders of the early twentieth century. After leaving school at the age of eleven, he became an apprentice at Radcliffe and Sagar in Leeds and from 1873 he served as a ´voice´ at Abbot and Smith, before founding his own company at Bramley, just outside the city in 1880.

As an accomplished singer and organist, he composed several hymn tunes and was even offered a place in the esteemed Carla Rosa company because of his fine baritone voice. He applied his love of music, instead though, to some of the finest examples of British organ-building of which the instrument at Rochdale Town Hall (see our cover photograph) is considered a fine example, having been built during the ´golden era´ of his company.

It´s opening recital was given in the presence of King George V and Queen Mary in July 1913 with a programme that included Bach, Listz, Schubert and Wagner.

Although the instrument had a major rebuild in 1979 it is still a wonderful sound, as this event proved emphatically.

Graham reflected the delight of seeing see and hearing, by virtue of video, this installation being so beautifully played!

After all, as Dr. Joe Dawson, (BA (Hons) MA MEd DMus LTCL ARMCM CT-ABRSM FLCM (Voice) FLCM (Composition) FRSA) reflected in his review on Steve Cooke´s all across the arts page in The Rochdale Observer (20th June 2020). ´the seemingly endless lockdown has for such a long term deprived us of the opportunity to see live events, so this project not only provided us with a concert but gave us, too, the chance to show our gratitude to the man who had done so much to make this event happen. This ´special, live on-line organ recital from Rochdale Town Hall was delivered by way of the You Tube channel and, at the time of writing, is still available on the player´s web site at www.jonathanscott.co.uk

Official figures show that more than 650 people have watched the You Tube production, which is an amazing figure for what would not be thought of as a mainstream event. That it remains available for us to listen to this wonderful programme of music is a real treat and it is also interesting how well the production reflects on Rochdale as a borough.´ said Dr. Joe. ´The town hall is displayed in all its glory, both inside and out, with its gothic grandeur, staircases and stained glass´ with the recently revealed River Roch running nearby. ´

This might have drawn some interesting mental compare and contrast opportunities of the sight of The River Roche and the sight and sounds of The Vlatava River as evoked by the music of Smetana, as captured in Jonathan´s playing.

The musician is now a member of staff at Chetham´s School Of Music in Manchester where he studied before attending The Royal Northern College of Music. Now recognised as a distinguished global performer, Jonathan Scott is also an Associate Artist of The Bridgewater Hall, where his popular lunch-time recitals often attracted audiences of around a thousand people, until Covid 19 intervened.

He is now The Honorary President of Oldham, Rochdale and Tameside Organists´Association (ORTOA) and so knows the Rochdale Town Hall Organ pretty well by now and has given a number of Christmas recitals to full houses at the venue.

Graham said on his post out to his fb group that, ´The cameras gave us close up views of the hands and fingers of Jonathan Scott negotiating, with sometimes lightning speed, the keys of the four manuals of the Binns organ (1913) of Rochdale Town Hall, and at the same time showed his feet covering the pedal board with breathtaking assurance.´

There was just the right amount of clever camera work to underline the musical accomplishment, with appropriate views of performer and instrument in their setting, inside and outside the magnificent building, provided by his brother, Tom, with whom he has given major joint performances and recorded albums as a duo.

Tonight´s musical offerings included Bach´s Jig Fugue, which we learned from certain camera shots we might relate to Foot-Tapper by The Shadows. Verdi´s Grand March, taken from Aida, as well as other selections in the programme, demonstrated what Dr. Dawson called ´the full pallet of colours held by the civic instrument.´ The reviewer also noted the informative introductions and insights offered by the performer throughout this You Tube presentation.

However, with desperately unfortunate timing, Rochdale Town Hall is scheduled to close for refurbishment at the close of this year. Thankfully, ORTOA are striving to deliver two more similar productions before the doors are temporarily closed once again. Fortunately, of course, we will have Jonathan Scott´s performance, recorded for posterity, to be watched over again as we wait through the early part of 2021 to re-visit Rochdale Town hall.

´This recording was´, said Graham, ´a triumph of production.´

There was only one work in the ´selection that had been originally written for organ: Bach’s ‘Gigue’ (Jig) Fugue, which illustrates the relaxed, lively and joyful side of Bach’s music not all that often displayed in the concert hall or in his church music. The other works were all arrangements of orchestral and vocal/operatic extracts.

Jonathan’s verbal introductions to Smetena’s ‘Vlatava’ and Saint-Saëns’ aria Softly Awakes My Heart from the opera Samson and Delilah were pleasantly easy-going in their approach, as well prefaced by concise and informative explanations to the audience beyond the broadcasting equipment. His actual playing of the recital demonstrated why he is in so much demand all over Europe and beyond as a soloist who knows so well the music he is playing and just how to present it to its fullest impact wherever he is seated. Scott is not only technically accurate but also artistically resonant with the music’s meaning as he interprets what a composer has caught in melodies, textures and rhythms: We could hear the flowing river Vlatava with its different channels and motions, and could see the seductive Delilah swaying with all her deceptive charms.

Both Graham Marshall and Dr. Joe Dawson, mentioned too, the final work in the programme, which was E. H. Lemare’s brilliant and challenging arrangement of Wagner’s ‘Ride of the Valkyries’. They seemed to agree there is no need for a multitude of brass players when you can propel their warrior sounds with your feet at the pedal board of Rochdale Town Hall’s organ!

My search engine was set to work once more, and this time found for me, one Edwin Henry Lemare (1865 –1934) who was an English organist and composer who lived the latter part of his life in the United States.

He was thought to be the most highly regarded and highly paid organist of his generation, as well as the greatest performer and one of the most important composers of the late Romantic English-American Organ School.

Insert photo 4 Rochdale Town hall organ Certainly, the inclusion of his piece in this perfectly selected montage of sounds helped to show that the organ remains firmly in the frame to be reckoned the king of instruments!

This piece was written with reference to

Steve Cooke´s all across the arts page, The Rochdale Observer, 20th June 2020

I thank Steve Cooke, Dr. Joe Dawson, Graham Marshall (and all those who occasionally contribute to Sidetracks & Detours)  for their generosity of spirit.