Blog
You are here: Home1 / Blog2 / AATA3 / CORONAVIRUS SIDE EFFECTS AT SxSW 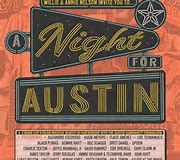 CORONAVIRUS SIDE EFFECTS AT SxSW

On Wednesday, June 10, a number of famous faces will join together for ‘A Night For Austin,’ a two-hour live-stream raising money for those in the Texas capital struggling in the COVID-19 age.

Brightcove Inc. (NASDAQ: BCOV),the world´s leading video technology platform, today announced last week that Brightcove Live will be the video technology behind a A Night For Austin, a telethon-style event benefiting the Austin, Texas community. The production, taking place ont the evening of June 10th will feature at-home appearances by a star-studded roster of performers who are rallying around Austins vital businesses to raise funds for Austin Community Foundation. Viewers can watch A Night for Austin at www.anightforaustin.com or on CBS Austin at 8:00 pm CT.´

A Night for Austin is leveraging Brightcove video to provide an exceptional viewing experience to viewers. Partnering with Luck Reunion, an experience-based collective, to produce the event, audiences will participate in a best-in-class viewing experience as live performances are streamed from the artists´ homes. This event is further proof that music entertainment is evolving to reach broader audiences during this time, while also giving back to the community.

Viewers will get a glimpse at the faces and places that have kept Austin alive and will witness showcase at-home performances from Paul Simon (left) and some of his closest friends, as well as highlight many of the iconic venues that have contributed to Austins status as a renowned cultural hub.

´Live music is a staple to the city of Austin, and it means so much to the city´s businesses that artists are rallying around them during these challenging times´, said Matt Bizer, CEO & Co-Founder of Luck Reunion. ´This is a significant event for the city as its raising money for a great cause, and its imperative it goes off without a hitch. That is why we selected Brightcove as our video partner as they are known for their reliability and scalability. We are confident that Brightcove will deliver an exceptional viewer experience to audiences everywhere, and especially to the residents of Austin´.

Giving back and supporting our local communities is paramount to Brightcove, and we are thrilled to be a part of this great event for the city of Austin´´, said Sara Larsen, CMO, Brightcove. ´Not only are they raising money for a great cause, but they´re bringing together so many legendary performers to make a difference. We are excited we can help make this live event happen and are committed to exceeding expectations with a premium video experience for audiences tuning in around the globe´.

Luck Productions is a rogue cultural collective headquartered in Willie Nelson´s Luck, TX. Anchored by its flagship event, the annual Luck Reunion  also dubbed as the Anti-Coachella by Fast Company Luck Productions creates experiences that embrace our past while cultivating new traditions in American roots culture. In addition to the Reunion, Luck Productions has hosted pop-up events including Luck Mansion residencies during Nashvilles AmericanaFest; a featured stage activation during Highwater Festival; the “Luck Hotel” content and concert series in Dallas; and the new “Luck Social” supper and song series held in Luck, TX. After the postponement of Luck Reunion 2020, Luck Productions kicked it into high gear with a virtual festival Til Further Notice´. This wasa live streaming concept that raised upwards $200,000 for participating artists and partnering non-profits who are heavily impacted by the current disaster. Read more about it via Pollstar.

Partnering participants, Brightcove Inc. (NASDAQ: BCOV) are the people behind the worlds leading video technology platform. With award-winning technology and services, ´they help organizations in more than seventy countries meet business challenges and create strategic opportunities by inspiring, entertaining, and engaging their audiences through video.

Since Brightcove was established in 2004, the company has consistently pushed boundaries to create a platform for people who are serious about video: one that is robust, scalable, and intuitive. Benefiting from a global infrastructure, unrivalled customer support, an extensive partner ecosystem, and relentless investment in R&D, Brightcove video sets the standard for professional grade video management, distribution, and monetization. To learn more, visit www.brightcove.com.

South by Southwest (stylized as SXSW and colloquially referred to as South By) is an annual conglomeration of parallel film, interactive media, and music festivals and conferences organized jointly that take place in mid-March in Austin, Texas, United States. It began in 1987 and has continued to grow in both scope and size every year. In 2017, the conference lasted for 10 days with the interactive track lasting for five days, music for seven days, and film for nine days.

A recent report published in The New York Times, by David Montgomery and Manny Fernandez, took a close look at the fall-out, although it has to be said the story went to press just as the massive global impact of coronavirus perhaps changed the hue of the report.

Nevertheless, aside from a haven of creativity the arts also provide gainful employment, and therefore salary and family support mechanisms to thousands of people in a town like Austin.

Chris Warndahl, the general manager of Miller Pro AVL, an event lighting, sound and video company in Austin that may have to let go some employees after losing about 35 percent of its annual income has said that, ´just to put it in perspective — if I was a big-box store, this is shutting down Christmas.´

The SxSW festival was cancelled last week, and by Friday, the first cases were announced — among them, the wife of the president of the University of Texas at Austin, the flagship state university whose burnt orange colour and longhorn logo can be seen across town.

“It is difficult for me to write this because the person who tested positive is my wife Carmel,” the university’s president, Gregory L. Fenves, wrote in a letter on Friday, announcing that he, his wife and another family member were in self-isolation.

The university cancelled classes on Friday, and with almost 50 cases statewide Governor Greg Abbott declared a state of disaster across Texas. Yet even before the latest developments, Austin had gone into disaster-recovery mode with the cancellation of South by Southwest.

At the Hotel Van Zandt downtown, the room cancellations could mean $1.2 million lost. A custom T-shirt producer, Oh Boy! Print Shop, expects a $40,000 hit. And the head bartender at Antone’s, a nightclub that helped start the careers of Stevie Ray Vaughan and other Texas musicians, says up to $4,000 in tips will vanish.

“We’ve just gone from what is usually the busiest 10 days of the year to what is sort of this unknown,” said Will Bridges, the co-owner of Antone’s, which had been poised to host more than three dozen bands as an official music venue for the festival.

“South By,” as Austin residents call it, has become a 10-day economic powerhouse, its effect on the local economy akin to hosting a Super Bowl, reaching $356 million last year, according to an analysis by a consulting firm, Greyhill Advisors. Nearly half a million people from around the world were expected to come, filling 55,000 room nights at hotels.

But last week, before a single case of the virus had been reported in the city, the mayor of Austin, Steve Adler, (left) announced a local state of emergency as the coronavirus emerged in the United States. His disaster declaration effectively cancelled South by Southwest for the first time since the festival was founded in 1987.

A non-profit foundation created the Stand With Austin Fund, where residents can donate money to those negatively affected. Festival organizers said they took the “necessary but heart breaking step” of laying off about a third of their full-time staff. The mayor and other officials have encouraged residents to go out and spend money at local businesses, and musicians have signalled a willingness to play for free or at reduced rates to keep the venues packed for bartenders and waiters. Harold Cook, a former executive director of the Texas Democratic Party, came up with #TipForTwo — double tipping to help the service industry.

“In some respects, we need to look at this as if a tornado came through our city,” Mr. Adler said. “There’s the cumulative number, the $350 million number, but behind that there is much more.´

In the days after the announcement, downtown Austin has been anything but empty, even after city officials on Monday banned most mass gatherings until May. There was a sense of defiance — and purpose — of supporting local businesses and workers.

On Sixth Street, an eclectic stretch of nightclubs, bars, tattoo shops and billiard halls, the weekend crowds were thick and the celebratory atmosphere remained. Stubb’s Bar-B-Q was packed for a concert by Trippie Redd, the rapper-singer, and a man strolled down the street with two chickens, one on his shoulder and another on his head.

South by Southwest volunteers gathered at the Dirty Dog Bar as part of a planned show of solidarity for those hurt by the cancellation. The list of those affected went on and on: nightclub owners, bartenders, pedicab drivers, dishwashers, tattoo artists, musicians, parking-lot operators.

“I think we’re just going to try to hit as many places as we can and try to share the love for all of our service industries,” said Tami Richter, the festival’s director of event staffing and resources.

Austin is by no means alone in coping with cancellations — or uncertainty. Across America, St. Patrick’s Day parades have been postponed. Universities have emptied or called off in-person classes. Conferences and business meetings have been halted, as have concerts, music festivals and shows.

And yet, different cities have responded in different ways, adding to the frustration and confusion.

About 165 miles outside Austin, the Houston Livestock Show and Rodeo, one of Texas’ biggest annual events, was open for business last week even as the South by Southwest cancellation was announced. On Wednesday, though, that was ordered closed, too, as the number of coronavirus cases climbed in the Houston region .

For South by Southwest, the pressure mounted for days before Mr. Adler, along with Travis County officials, cancelled it. Facebook, Twitter and other companies had already backed out of attending. Mr. Adler, a 63-year-old lawyer and Democrat who has been mayor for more than five years, described his decision as agonizing. He was forced to weigh the city’s economic anchor against health care officials’ warnings about how the virus may spread, especially in large groups of people who have gathered from all over.

“The focus had to be on keeping the community safe,” Mr. Adler said. On Friday morning on the 13th March, on what was to have been the first day of the festival, officials announced that two people have tested positive for the coronavirus in the area.

Now. months later, on June 10th 2020, as the lockdown is eased, musicians of the calibre of Paul Simon and Willie Nelson will help Austin to take that first step back on the ´long road to freedom´, through a country charged with racial tension and crisis in its health and financial institutions. It is appropriate, perhaps, that a region synonymous with wonderful songwriters and visionary artists is now being cradled by these artists. There is nobody I would rather bump inot, and nobody I would more trust, as I wander these Sidetracks & Detours.