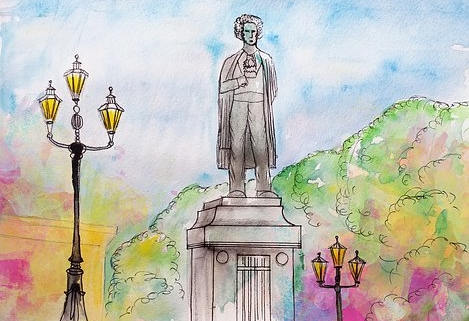 I´m sure most of us, if not by now then certainly by the end of lockdown, will have dreamed of our favourite restaurants we cannot wait to dine at again, or of a concert by a favourite act we want to see, a favourite country walk we want to follow or a sea view we must go down to. There will be poetry slams some of us want to hear again and there will favourite galleries, libraries or other buildings lovers of architecture will be pining for.

Plans announced recently by our poet laureate Simon Armitage suggest that sometime after the locks are opened we will be able visit a new National Poetry Centre that will be built in Leeds rather than in London´s gilded city.

As the first patron of the Leeds 2023 cultural investment programme Simon promised that  The National Poetry Centre will be a public space with an extensive poetry collection, research facilities, a performance space, a café, events spaces and hopefully accommodation for visiting poets.

This story was carried in the May edition of Writing Magazine, an essential monthly publication for both established and emerging writers. Simon, who is Professor of Poetry at Leeds University was reported as saying, ‘one very ambitious goal I have set myself over the forthcoming decade of my tenure as laureate is to develop a National Poetry Centre, to bring poetry in line with other national art forms that have their own headquarters and venues, such as the National Theatre and the National Gallery etc.  In my view the centre needs to be outside London and Leeds is an ideal location: accessible, central, dynamic, contemporary, future-minded, people-oriented, community-aware, committed to cultural regeneration, and building momentum towards 2023.´

Leeds 2023 will be a year-long programme of arts and culture.

‘The minute Simon mentioned his vision to us at the start of his tenure we knew it was something we wanted to do,’ said Leeds 2023 chair Ruth Pitt.  ‘Poetry speaks to everyone and any of us can pick up a pen and write.  A National Poetry Centre embodies everything we want to achieve, which is to benefit our people, nurture learning, talent and creativity and to establish a visitor destination for poetry and literature fans across the world.’

Further details of this ambitious project can be seen at Website:

In the closed up locked here and now of 2020, Meanwhile, Simon still has plenty with which to occupy himself, as surely the highly paid post of poet laureate demands of its occupiers. Actually, as many of you will already know, the stipend is somewhat derisory, but Simon seems not only un-phased by that but also hugely area and proud of the responsibility it brings and the platform it offers.

He once dreamed of making it big in a rock band, and certainly when I was one his (mature) students on a module of creative writing for my degree at Leeds University in 1998 he earned a lot of street cred from this beyond-middle-aged rock dude, for knowing a good deal about so many of the Mexican rock-country songwriters. These included artists as great as the late Townes Van Zandt, Guy Clark and John Stewart who never made it on to music´s main highways, even if the Austin guys made a name on the lost highway.

´Poets have collaborated, libretti, hymns and lyrics with songwriters right back to the beginning, so its not unusual,´ Townes recently told David Smyth of The Evening Standard. Whilst that is certainly true, not too many laureates have actually started a band so his forming a trio called LYR might surprise many, but is actually not too surprising of Simon. He has the horizon stare of most indie band leaders, but it seemed to be his quiet charm that seemed to most affect his students in my year, who like I did, hung on his every softly spoken word. His most heartfelt proclamations of love for music seem to be for bands of that indie ilk, like The Smiths and The Fall and as recently as 2008 he wrote a prose poetry book called Gig. The Life And Times Of A Rock Star Fantasist.

Simon, who is now 56, said in that book that it had recently occurred to him ´that in the process of failing to become a rock star have I become a writer.´

Simon would probably be the first to admit that his musical career to date has been mixed, despite answer-smashing the name of his first band Tess And The D´Urbs to echo of street cred and to foreshadow what has become a glittering literary career. His only album to date was released in 2009 with a later band called The Scaremongers that his father said at the time should have called itself Mid-Life Crisis. Nevertheless, his music career has brought him a prestigious Ivor Novello award for his lyrical contribution to a TV documentary, called Feltham Sings, expressing the emotions of prison inmates.

His new group, Lyr, (an acronym of Land Yacht Regatta !) have already signed with a major record label, and represent singer-writer collaboration between Simon and Richard Walters and music producer Patrick Pearson. On their debut album Simon delivers his lines in the same flat Northern accent that somehow carried great gravitas for those of us listening to him in those creative writing classes at university. There is rarely a blast in an Armitage delivery but he delivers lines like a slow right arm bowler in cricket, with his deceptively gentle deliveries often exploding off the pitch and knocking down the castle.

Pearson adds piano and an icy soundscape to Simon´s vocals, whilst Walters sings occasional responses. All this supplies a stillness in which Simon´s quiet, but exquisite details are amplified.

Simon suggested to the journalist that ´every track is a monologue delivered by a character in some kind of crisis and all are calling out in some way.´

Having once been a guest on a panel at a debate before live audience at a Rochdale Literature And Ideas Festival, discussing whether poetry can be enhanced by music, I was intrigued that his interviewer then asked Simon what is it about his lines on this album that has them require music when the rest of his work doesn´t.  Simon´s reply is that he has always believed that ´in a ´pure´ poem (the poet) has to write everything in there, because there´s not going to be a back-beat or a chord sequence to run the engine of the emotions.´

Simon then explains that ´with these writings, there seems to be more left on the surface. They´ve been left open to some other element, which is provided by the music.´

It is almost ten years since Walters first contacted Armitage about the idea of working together and Armitage did provide lyrics for Redwood, which Walters delivered as a ballad on his debut solo album, Regret Loss, in 2012.

A demo that Walters and Pearson then produced on a Dictaphone and sent to Armitage for consideration gathered dust before Armitage finally began to collate a few pieces that he now says ´were waifs and strays.´ He goes on to describe these as good enough to stand as poems in their own shoes but only by the side of a road ´trying to hitching a lift, waiting for something else to come along.´ He sent them back and his two colleagues eventually sent them back with music, which begs the question the journalist then asks on hearing this, about whether they sounded anything like he had been expecting.

Now these song-poems are coming out on an album at a time when people are becoming re-accustomed to listening, after a period in Simon´s growing up years in which he says ´thrashy bands were putting on records that couldn´t really be heard.´ The poet attributes the rap scene as perhaps a contributory factor to lyrics becoming more conspicuous in music today, and comments that he thinks ´there is a re-energised interest in lyrics these days, but this is definitely not rap. Whatever I´m doing comes out of a literary tradition, a folk tradition, even the tradition of the hymns.´

The album, Call In The Crash Team, from Lyr, on The Mercury KX label, has been scheduled for release on May 29th with a number of promotional gigs planned around that date. Of course, all that is subject to the current health situation, and might all have to be re-arranged, but it is yet another item on the arts calendar to look forward to when the good old days return.

PRESIDENT SPEAKS FROM THE ART. Poets too.