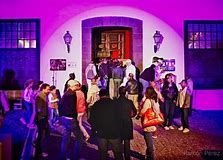 EVERY SATURDAY FOR YEARS UNTIL …

Regular players in, or with, The Tonin Corujo Quartet include Tonin Corujo, of course, as well as Carlos Perez, Manuel Becerra, Domingo Corrujo, Kovacs Szolti, Szabo Mate, Israel Curbelo, Dionisio Rodriguez, Yarel Hernandez, Tony Cantero and Ale Garcia. Of these I noted Tonin, Carlos, Manuel (I think) and Tony as being in the line up featured in the footage of one of the first ´virtual´ concerts delivered in the current close down of all live music public performances on Lanzarote.

We reviewed that event here on these pages and the lovely, relaxed and informal jam session feel to the music has served an exemplar for the many similar podcast, you tubes, facebooks and instagram events that have followed over the last month or so.

The Toñin Corujo Quartet is the result of years of research and experience around the timple instrument.

Basically this quartet interprets Toñin Corujo themes, although there are also contributions from all its members. The outfit often surprises listeners, even as it seems to wink at its own daring, by including edgy versions of works by other authors.

This solid formation consists of four eclectic musicians, from styles as varied as popular music, jazz and even heavy metal, who come together to travel along little-travelled sound paths that awaken intense and unexpected emotions. In fact, one reviewer has noted that the Toñin Corujo Quartet enjoys a staging full of complicity and the good humour of these virtuoso musicians of skin, soul and sound muscle, áre always surprising.´

Toñín Corujo is a Canary musician, born in 1960 in Arrecife on Lanzarote, and his instrument is the timple. His passion for music was transmitted through his own family, his grandfather being the one who taught him the first chords on a guitar before Tonin´s father started his son playing on timple.

In 1975 Tonin becames part of the Awañac group, dedicated to ethnographic research, carrying out different arts rescue work, including the recovery of the coplas of Víctor Fernández Gopar, a popular copyist writer of palpable quality and ingenuity, born in 1844.

In those years Tonin Corujo began teaching as a music teacher, although he combined this with his own training. This became much more serious and constant in the middle of the following decade. First he received guitar lessons from Professor Silvestre Alvarez and then moved to Paris where he studied classical guitar, harmony and composition. There he met Blas Sánchez, Cristian Salmón and Didie Prat, his teachers. With Blas he enlisted in Guitar Consort and with this training gave several concerts in Kladno and Prague. Also in Paris he had the opportunity to share experiences with Juan Carlos Pérez, Domingo Rodríguez and to receive classes from Michelle Ponce and Roland Dyens.

In 1991 he returned to Lanzarote, where he opened his own music school and made music teaching his main profession and livelihood. Soon he worked on the production of the album “Rancho de Pascua de San Bartolomé”, then appeared on the first album of the group Antenara.

In 2004 he released his first album under his own name: ´Arrecife´ was a work that made a good impact in throughout The Canary Islands and allowed him to participate in the Womad Canarias festival of 2005 where he sharesd the stage with Salif Keita, The Wailers, Carmen Paris, Yasmin Levy, Trilok Gurtu, Amadou & Mariam, The Bays, Cristóbal Repetto, Kanda Bongo Man, and Other.

Representing Las Islas in a project of the Government of the Canary Islands saw him give several concerts at Expo Zaragoza 2008. In 2011. Toñín Corujo brought together the most important music in the Canary Islands for the recording of “El Salinero”, on the coplas of Víctor Fernández Gopar, performed by his father Antonio Corujo. That same year he published “Lanzarote Music”.

Toñín takes an eclectic musical approach, based on Lanzarote and Canary Island tradition, but open to the musical reality of the whole planet, and always contemporary and heartfelt.

Since June  2013, Toñin Corujo Quartet has played every Saturday in Nights Of Jameos, in concert with Carlos Perez: Saxo, Yarel Hernández: Guitar, Israel Curbelo: Piano and Percussion and the timple of Toñin Corujo.

These performances have been temporarily cancelled during the coronavirus lockdown, but the ´virtual´ concert they recently delivered will surely have audiences queuing round the mountains and down to the sea to try to get in.

Meanwhile, you might care to change what we call lockdown time into ´listen, learn and like time.´ It might not seem it in these dark days, but there will come a time in the future when we are busy again, re-building this world and our lives. We might then be looking back and wondering what we did with all the time created by lockdown and some of us might have to acknowledge that we missed the cloud´s silver lining by failing to discover new music to add to our playlists.

If your thirst-for-the-new is unquenchable then have a listen to some of the links, or signposts, we place here along the Sidetracks & Detours we wander. The video recording below, for instance, will surely lead you even further back into the caves archived music by The Tonin Corujo Quarter.

BEYOND GOOD AND EVIL IN THE LOCKDOWN By Michael Higgins