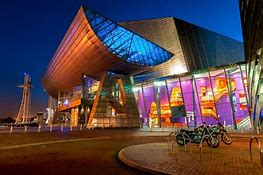 When actor Timothy Spall brought to life one of Britain´s favourite artists, painter JMW Turner,  in the 2014 film Mr. Turner, he awakened public interest in Margate, a town so often at the centre of Turner´s work. Now, as Spall embarks on another role interpreting the life of another nationally revered artist, the town of Salford, at the centre of what is sometimes known as Lowry-land, is hoping for a similar boost in its cultural status.

At a time when our Sidetracks And Detours all across the arts have recently looked at the significance of statues of sporting icons, like Nat Lofthouse and Freddie Trueman, we now hear that there are plans to install Lowry-style steel figures in public locations around Salford. The idea to do so is that of local councillor Stephen Coen, who spoke to The Guardian newspaper recently.

The councillor said that ´Salford is increasingly a creative hub and Lowry’s unique view of the city and the region still resonates locally and internationally.´

Cllr. Coen feels that L. S. Lowry ´captured the working-class industrial heritage´ of the area, and says that tapping in to the region´s creative sector could help bring aspects of his work to the public in many different ways. With football such a huge cultural part of this area of Manchester, and with Salford City currently enjoying their first season ever of football league status, a strategic placement of a copy or representation of Lowry´s Going To The Match (now one of the world´s most expensive paintings) might be seen as a great way of celebrating that fact, and drawing the gaze of the nation to Salford.

There is already a modern theatre and art gallery named after the artist. The Lowry was built twenty odd years ago as part of the massive re-gentrification of the Salford Quays that created hotels, shopping malls and new BBC studios.

The theatre ´stars´ in the closing scenes of Mrs. Lowry And Son, and can surely look forward to a new stream of visitors. In fact Julia Fawcett, the gallery´s CEO, suggests there could be a tribute to the film carried in the venue´s permanent exhibition, LS Lowry, The Art And The Artist. That would be appropriate, as more than forty years after his death there is still a feeling of permanence about the artist and his work. With this prestigious building carrying his name, the famous ´pop/folk´ hit by Brian and Michael about the ´matchstalk men and matchstalk cats and dogs´ as the characters in his works became known, proposals to show him on new bank notes while his works now sell for millions and now this bio-pic telling his story  lowry is part of not only the Salford landscape but also part of the fabric of the whole country.

The director of the film is Adrian Nobel who believes that, like all great art, Lowry´s work is powerful enough to continually change perceptions and help us see the world differently. Adrian is a former director of The Royal Shakespeare Company and, when speaking of  how art offers the opportunity to let us look at things again, says ´there is a kind of morality in the way Lowry does this.´

Note that immortality bestowed by the use of the present tense, by the way.

Nevertheless, some residents believe that the Local Authority has not done enough to fully exploit the attention Lowry´s work could bring to the area. A family living on the very street, Station Road, where the artist and his mother lived in a terraced house, are raising funds themselves to purchase a bronze statue of Lowry for their front garden. There are complaints that the local council have not done enough to commemorate Lowry´s early life and place of work, whereas in Mottram, up in nearby Longendale, there has long been a statue of Lowry sitting on a bench looking out over the hills. It was here that Lowry spent the ´retirement´ of his later life.

Mrs. Lowry And Son, the film, adapted from a play by Martyn Hesford, also stars Vanessa Redgrave playing the mother, shown here, as so often perceived, as overbearing on a son with whom she lived in the claustrophobic  environment of a small house purchased in 1908.

Lowry, who worked most of his life as a rent collector, was actually tutored by a French impressionist artist called Adolphe Valette, even though Mrs. Lowry disapproved of her son dabbling in the arts. He would paint at night, after she had fallen asleep, and although his palette had only a limited number of colours he would use both the hairy and sharp ends of his brush as well as his fingertips to create more subtle hues.

The director confesses that Lowry remains ´a riddle in may ways´ whilst acknowledging that he tried to develop the notion, in the film, that Lowry might have found some artisitic freedom in that tiny attic, and when walking the streets of Salford.

After the death of her husband Elizabeth Lowry became ill and bed ridden and Lowry cared for her up to her death in 1939 which was before his work had gained any recognition.

Adrian Noble believes the relationship between mother and son prevented Lowry from properly sharing his art during her lifetime, and even when he was functioning almost as her full time carer she was still doing and saying much to dissuade him from following his vision. Noble says Lowry´s is án extraordinary story of someone, so original and gifted, hidden from the worlk for such a long time.´

Christened Laurence Stephen, LS Lowry was actually born in Stretford and spent his early childhood in the middle class area of Victoria park in Rusholme. He was twenty two years old before financial problems for his parents meant a move to Pendlebury, which he at first hated and detested. However the ´look´ of the people there, and their characteristics peculiar to that environment slowly began to form his artistic obsession. The landscape and skylines of factories and chimneys became the backdrop he would constantly seek to re-capture or to re-create on canvas.

Lowry´s work was not all of matchstalk figures, of course. The exhibition gallery in the eponymous silver metalled theatre and gallery houses some of the more contoured pencil sketches of rural, if industrialised, vistas. I remember how fascinated I was by these works when given a guided tour of the exhibition centre by a friend and fellow writer. John Siddique http://www.johnsiddique.co.uk/ was serving there at the time as poet in residence, and his identification of the tiny smudges of colour, invariably red, in these sketches and his own obvious love of the artist raised my own awareness of a local artist and national treasure I had until then ignored for more than forty years.

The author of the original play grew up only a couple of streets away from Lowry´s home and the director of the film the play inspired believes the script has perfectly caught the attitude of the regional dialect, and he too would like to see more local recognition of the artist´s talent and perception, believing there remains a snobbery about Lowry´s representations of working class life, particularly in the arts world

The film portrays Mrs. Lowry as a lonely widow wondering if the world will ever remember she and her son even existed,  once they are dead and their house has been forgotten. Whether Lowry really did reassure her that it would all live on his paintings, and whether or not she believed him if he did so, is surely the stuff of conjecture. What is certain, though, is that Lowry´s work so perfectly captures and frames that same smoky, sooty air of the twentieth century Salford that was so well remembered in words and music by another ¨son of Salford´.

It was in 1949 that Ewan MacColl (father of Kirsty who would alos grow up to be a great songwriter) told us how he met his love ´by the gas works wall´ in that Dirty Old Town. The song was  actually written for a play based on the region called Landscape With Chimneys, which could also still serve as an umbrella title for Lowry´s works. The song later became a staple diet of the ´folk revival of the nineteen sixties and seventies, being recorded by the likes of The Dubliners.

A line about the smell of ´spring on the Salford wind´ was often mis-translated by club singers, live and in the recording studio as being of spring on the ´sulphered wind´ but the words about the ´old canal´ and other ´beauty spots´ firmly associate the lyric to MacColl´s home town. It is a Pogues´ version of the song, that usually includes a haunting and evocative harmonica piece, that accompanies the players of Salford City as they now run out to play in a more rarified atmosphere of Salford than that recalled in MacColl´s work. Salford has also been captured in earlier films such as Hobson´s Choice and in literature in the classic novel Love On The Dole and more recently in The Sound Of Loneliness by Craig Wallwork.

We at all across the arts have brought with us to Lanzarote our own memories of Salford. My wife (and now photographer !) worked with the NHS Salford Clinical Commissioning group and I have happy memories too of playing the Black Lion Folk Club. We can both remember the building and the opening of The Lowry Gallery And Theatre and the bridge that blew in the wind across the water to the towering stadium of Old Trafford. The Lowry building, too, rises to great heights and my first impression of it was how surreal that building, archly shadowed in subdued lighting, and its seemingly metal exterior gleaming in the daylight sun, and inside being of labryntine corridors and twisty staircases to its several theatre spaces, art galleries and merchandise stores. It became the venue for some great concert and my first visit there was to see Janis Ian in concert. To see thousands of people walking to a theatre that was bathed in red and blue shading on a dark night, with the lights of what previously had been a waterfront wasteland but was now The Lowry Hotel felt surreal and yet, somehow, still strangely Lowry-like.

Nevertheless, this new release of Mrs. Lowry And Son is bound to re-awaken interest in Lowry´s paintings which, with each ´picture´ telling a thousand words, serve as an encyclopaedia offering a colourful history of a city often only viewed in black and white.

Mrs Lowry & Son  is now on general release in cinemas across the UK.

LOOKING FOR LAUGHS? THE CHASE IS ON !