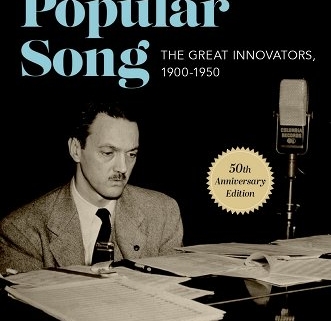 Now, in a 50th anniversary edition, popular music scholar Robert Rawlins brings the book fully up-to-date for the 21st century. Whereas previous editions featured only piano scores, the format has been changed to lead sheet notation with lyrics, making it accessible to a wider readership. Rawlins has also added more than sixty music examples to help complete the chapter on Irving Berlin.

One of the most fascinating features of the original edition was Wilder’s inventive use of language, often revealing his strong and sometimes irreverent opinions. By and large, these have been left the way Wilder wrote them, but now also feature footnotes that clarify, elucidate, and even correct moreover, a new chapter has been added, discussing several songs and composers including Duke Ellington and Fats Waller that Wilder might have well included but was not able to.

Robert Rawlins (right) is Professor of Music Theory at Rowan University, where he has taught for 20 years. He received his Ph.D. in Musicology from Rutgers University. Rawlins is the author of six books, including Jazzology and The Real Dixieland Book, and has published more than 100 articles in dozens of journals, including Downbeat, Jazz Educator’s Journal, American Music, Popular Music and Society, and The Journal of Popular Culture.

Robert plays the clarinet, saxophone, and flute and has been a professional musician his entire life. He has worked with hundreds of entertainers, including Tony Bennett, Lady Gaga, Dean Martin, Aretha Franklin, Ray Charles, Jay Leno, Regis Philbin, Rosemary Clooney, The Temptations, Frank Sinatra, Jr., and Michael Feinstein. In his early days, Robert played with some of the last surviving big band leaders, including Bob Crosby, Sammy Kaye, Warren Covington, Les & Larry Elgart, Ray McKinley, Sy Zentnor, and Billy Eckstine. He was once a regular member of the Jimmy Dorsey Orchestra under the direction of trumpeter Lee Castle, and played for the very last performance of the original Mills Brothers. Robert is also a former member of the Philadelphia Pops Orchestra.

Alec Wilder (left) was the composer of such songs as I’ll Be Around, It’s So Peaceful in the Country, and While We’re Young, as well as theater and film scores and chamber music. Wilder was born in Rochester, New York, United States, to a prominent family; the Wilder Building downtown (at the “Four Corners”) bears the family’s name and his maternal grandfather, and namesake, was prominent banker Alexander Lafayette Chew. As a young boy, he travelled to New York City with his mother and stayed at the Algonquin Hotel. It would later be his home for the last 40 or so years of his life. He attended several prep schools, unhappily, as a teenager. Around this time, he hired a lawyer and essentially “divorced” himself from his family, gaining for himself some portion of the family fortune.

He was largely self-taught as a composer; he studied privately with the composers Herman Inch and Edward Royce, who taught at the Eastman School of Music in the 1920s, but never registered for classes and never received his degree. While there, he edited a humor magazine and scored music for short films directed by James Sibley Watson. Wilder was eventually awarded an honorary degree in 1973.

He was good friends with Frank Sinatra, Peggy Lee (right) , Tony Bennett and others who helped develop the American popular music canon. Among the popular songs he wrote or co-wrote were “I’ll Be Around” (a hit for the Mills Brothers), “While We’re Young” (recorded by Peggy Lee and many others), “Blackberry Winter”, “Where Do You Go?” (recorded by Sinatra) and “It’s So Peaceful in the Country”. He also wrote many songs for the cabaret artist Mabel Mercer, including one of her signature pieces, “Did You Ever Cross Over to Sneden’s?”. Wilder also occasionally wrote his own lyrics, including for his most famous song “I’ll Be Around”. Other lyricists he worked with included Loonis McGlohon, William Engvick, Johnny Mercer and Fran Landesman.

In addition to writing popular songs, Wilder also composed classical pieces for unique combinations of orchestral instruments. The Alec Wilder Octet, including Eastman classmate Mitch Miller on oboe, recorded several of his originals for Brunswick Records in 1938-40. His classical numbers, which often had off-beat, humorous titles (“The Hotel Detective Registers”), were strongly influenced by jazz. He wrote eleven operas; one of which, Miss Chicken Little (1953), was commissioned for television by CBS. Wilder also arranged a series of Christmas carols for Tubachristmas.

Wilder wrote the definitive book American Popular Song: The Great Innovators, 1900–1950 (1972). He was also featured in a radio series based on the book, broadcast in the middle to late 1970s. With lyricist Loonis McGlohon (his co-host on the radio series) he composed songs for the Land of Oz theme park in Banner Elk, North Carolina.

Wilder loved puzzles: he created his own cryptic crosswords, and could spend hours with a jigsaw puzzle. He also loved to talk (he had an extensive knowledge of the world) and most of all, laugh. Displeased with how Peggy Lee improvised the ending of “While We’re Young”, he wrote her a note: “The next time you come to the bridge [of the song], jump!” Pianist Marian McPartland told the story of this “alleged” comment to Tony Bennett, on her “Piano Jazz” radio show in 2004.

a WEAVING OF WORDS