Blog
You are here: Home1 / Blog2 / Music3 / against all odds A BOX SET SERVES JUSTICE 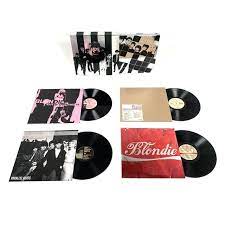 against the odds A BOX SET SERVES JUSTICE

Saby Reyes-Kulkarni is a long-time contributor at Paste. He believes that a music journalist’s job is to guide readers to their own impressions of the music. You can find him on Twitter and Substack at feedbackdef.substack.com

It’s hard to imagine now, but the term “punk” didn’t originally refer to a sound so much as an outlook. When the punk movement blossomed in Lower Manhattan in the early ’70s, bands as disparate as The Ramones, Television (left) and Patti Smith were all unified by a commitment to creative independence. The scene they emerged from incubated the efforts of musicians who had little in common with the more stylistically uniform definition of punk that we think of today. Most notable among these were groups like Talking Heads, Tom Tom Club and, of course, Blondie—all of whom drew from art rock, disco, hip-hop, funk and reggae on their way to helping launch the new wave genre.

Blondie (right) , in particular, crafted such slick, slinky pop hits—”Heart of Glass,” “Rapture,” “The Tide Is High,” etc.—that it’s hard to find a place for the iconic New York outfit within the anti-commercialist code of ethics their peers would come to represent. We certainly can’t fault anyone (especially people who didn’t live through the period) for locating Blondie right next to groups like The Cars and The Go-Go’s, whose musicianship is similarly easy to overlook in favor of their fizzy outer surface. But if you sit down with Blondie’s classic-era catalog from start to finish—six albums spanning their formation in 1974 to their breakup in 1982—you find a creatively restless unit who aren’t so easy to pigeonhole under the new wave banner.

If Blondie’s hits don’t exactly misrepresent them, the hits don’t tell the whole story, either. Moreover, it took Blondie about three albums for their sound to gel. Against the Odds (right), the first-ever Blondie box set, broadens our understanding of the band’s progression over time by giving us access to the first recording Blondie ever did, a basement session organized by journalist Alan Betrock, founder of the New York Rocker magazine (which at one time boasted Yo La Tengo’s Ira Kaplan as a contributor). In the liner notes, Betrock recalls in hilarious detail how green Blondie were as a live act: “They just couldn’t play live. They’d stop in the middle of a song; amps would go out; the guitar would go out; strings would break and they wouldn’t have extra ones.”

What a pleasant shock, then, to discover that this ramshackle early session offers a crystal-clear glimpse of all the elements that made Blondie stand out from the start—much clearer, in fact, than the band’s 1976 self-titled debut. The first sound we hear is a set of harmony “ooh”’s from frontwoman Debbie Harry on a cover of the 1965 Shangri-Las single “Out in the Streets.” Guitarist/co-founder Chris Stein, then-bassist Gary Valentine and drummer Clem Burke soon join in with a reggae-inspired groove. Next, an embryonic version of “Heart of Glass” titled “The Disco Song” still manages to startle in spite of its crudeness. (Both these versions have been available as reissue bonus content for years, but they make a much bigger impact in proper chronological order.)

Not unlike the Bad Brains classic Black Dots, which was recorded in a similar setting, the ambience of the recording hits you like a blast of fresh air that immediately sheds light on who this band actually was. Within seconds, we can hear the pluck of young musicians cleverly subverting girl-group tropes, with enthusiasm outweighing proficiency in a way that’s pleasant to listen to. In other words, we can hear Blondie’s punk roots on record more than ever before. All of a sudden, the creative moves the band would later become more adept at executing make sense. Depending on your perspective, the first half or so of Blondie’s original catalog is either frustratingly disjointed or boldly eclectic—or both. If you’ve never experienced Blondie as an album band, then you’re in for a heap of surprises, for better or worse.

“Little Girl Lies,” for example, fuses classic ’50s-style pop with the kind of psychedelia one finds on the first few Grateful Dead albums. And before the band kicks into an uptempo, Springsteen-esque boogie, “Love at the Pier” hints ever so briefly at prog with an intro that wouldn’t sound out of place on Yes’ Fragile or even a Frank Zappa record. “No Imagination,” the next track on the same album, recalls the bombastic theatricality of early Genesis and Queen. “Hanging on the Telephone” captures quintessential 1980s production values two years ahead of the curve, while “Atomic” merges proto-electronica with garage surf. The examples—of fresh genre inversions, clever musical twists and quirky decisions—are so plentiful they could fill this review, not to mention the myriad qualities that made Harry a once-in-a-generation figure.

Harry (left) possessed a unique, instantly recognizable voice that was at once sturdy and delicate. She could shift from her smoky lower register to an angelic falsetto with ease, which gave her vocals a three-dimensional quality. And her ability to toy with conventional notions of vacuity and coyness was so effective that it’s impossible for even the most superficially minded listener to miss the point. You know she’s satirizing glamor, even as she embodies glamor to a tee. And her fierce intelligence pretty much singlehandedly destroys the false dichotomy between outer “beauty” and inner substance.

With all that said, does Against the Odds make the main albums any more enjoyable to listen to than they already were? Unless you prefer the new (and arguably much-needed) mastering job, the answer is: not really. If you’re a casual fan with little interest in putting on your historian’s hat, or going on an archeological dig, or engaging in the meta-exercise of re-contextualizing familiar songs, then Against the Odds just isn’t for you. For anyone else, though, this package delivers in spades, especially when it comes to its abundance of photos and commentary. The liners here just make for a great read, and one is struck by just how stunning Blondie (right) were to look at as a band. Meanwhile, a separate book of album covers and memorabilia honors the collector-type fan quite nicely.

Almost 50 years later, the art direction behind some of the band’s now-iconic album covers and photo shoots still feels remarkably modern. When music journalists tried to drape a blanket of mythology around the early-2000s New York scene, later chronicled in the book Meet Me in the Bathroom, they were all—journalists and bands alike—chasing something that Blondie have an undisputed right to claim. The difference, though, is that while Blondie positively oozed cool, they never sacrificed substance in the pursuit of style and, in fact, cultivated a visual aesthetic with a great deal of craft. They’re one of those rare bands where image isn’t actually secondary to the art, but rather an essential component of it.

Against The Odds captures that art in its totality. The sounds and images included here were lovingly curated from Chris Stein’s personal archive (including 100 tape reels), which sat in his barn in Woodstock, New York, for 20 years. Listeners should look before they leap to see how far they want to delve into the nitty gritty, but the attention to detail here is undeniable. As far as box sets go, Against the Odds is a textbook example f how to do justice to a band’s legacy.

The prime source for this article was a piece by Sabi Reyes Kulkarni for Paste on line magazine. Check out the magazine on line for scores of similar thought-provoking work.

This article was collated by Norman Warwick, (right) a weekly columnist with Lanzarote Information and owner and editor of this daily blog at Sidetracks And Detours.

NAMES FALL OUT IN COVERSATION when Bob Dylan talks to Wall St. Journal