Blog
You are here: Home1 / Blog2 / AATA3 / NAMES FALL OUT IN COVERSATION when Bob Dylan talks to Wall St. Journal 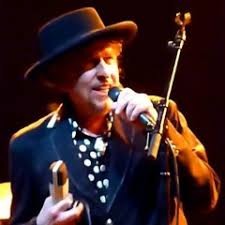 NAMES FALL OUT IN CONVERSATION

when Bob Dylan spoke to The Wall Street Journal

When I was ´working´ with Ian Johnson of Stampede Promotions UK  throughout the nineteen eighties I was delighted at how often being perhaps the only press presence, albeit freelance, at gigs by great Americana songwriters enabled me to secure exclusive interviews. The names of those I interviewed included legends like John Stewart, Guy Clark, Tom Russell and Townes Van Zandt. Female songwriters like Katy Moffatt and Mary Chapin Carpenter were also on list that probably ruins to almost a hundred. The real joy of those interviews was when the artists spoke of the writers, singers and musicians of those who had influenced them in their youth and on some occasions too when the interviewees would reveal who they were listening to at the time of interview. I recently heard of an interview in The Wall Street Journal in which Bob Dylan recently shared some of his favourite current listening. So come follow you art down sidetracks & detours to meet a range of musical artists likely to surprise you.

Late last year, one of my favourite music journalists, Jacob Uitti, recently alerted readers of American Songwriter to an interview given by Bob Dylan. Mr Uittio gave only brief extracts bu the full interview is tall available at the WSJ website.

Bob Dylan (left) is constantly touring but he rarely gives interviews. Nevertheless, he did chat recently with The Wall Street Journal as he’s promoting his new book, The Philosophy Of Modern Song.

.Throughout the rare interview, the singer/songwriter discussed TV shows he’s currently binging, modern artists he’s been listening to, and the positives and negatives of social media.

Coronation Street, Father Brown, and some early Twilight Zones´, he said of the TV shows he binge-watches. ´I know they’re old-fashioned, but they make me feel at home. I’m no fan of packaged programs or news shows. I never watch anything foul-smelling or evil. Nothing disgusting´.

Speaking about social media, he said the platforms ´bring happiness to a lot of people´. He also notes that some people even find love through social media. ´It’s fantastic if you’re a sociable person; the communication lines are wide open´. he added. “You can refashion anything, blot out memories and change history. But they can divide and separate us, as well´.

When asked how he stays in shape these days, he said it was about boxing and sparring.

´It’s functional and detached from trends´, he said. “It’s a limitless playground, and you don’t need an app´.

He says that he keeps touring because ´it is a perfect way to stay anonymous and still be a member of the social order. You’re the master of your fate. But it’s not an easy path to take, not fun and games´.

Nor is touring easily affordable or manageable these days according to New Zealand born singer Lorde (left) . Type her name into the search engine in our archives of more than 800 posts to read her description of the slow road to recovery following covid.

The singer also explained why he thanked ´the crew from Dunkin Donuts´, in his new book: ´They were compassionate, supportive, and they went the extra mile´.

There is an expanded version of the interview on his website. In that version, Dylan talks about which modern artists he enjoys, including Klaxons and Julian Casablancas.

´Performers and songwriters recommend things to me´, he said. “Others I just wake up and they’re there. Some I’ve seen live. The Oasis Brothers, I like them both, Julian Casablancas, the Klaxons (right), Grace Potter. I’ve seen Metallica twice. I’ve made special efforts to see Jack White and Alex Turner. ´

Zach Deputy, I’ve discovered him lately. He’s a one man show like Ed Sheeran, but he sits down when he plays.

Á few other names fell out in conversation the WSJ.

´I’m a fan of Royal Blood, Celeste, Rag’n’Bone Man (left), Wu-Tang, Eminem, Nick Cave, Leonard Cohen, anybody with a feeling for words and language, anybody whose vision parallels mine.”

Dylan was at the time of the interview promoting his new book The Philosophy Of Modern Song, (right) now available in all good book stores.

It seems that whilst Dylan wrote a soundtrack for a generation and gave us codes to live by, his tastes are eclectic.

Perhaps because he was granted a Nobel prize for Literature a few years ago, it seems strange to think that Bob Dylan settles down to watch Corrie just like I do,

Perhaps we shouldn´t think that strange, though, because Coronation Street is penned by a team of extraordinary writers, as was pointed out to me in my own exclusive interviews with Jane Danson (Leanne Battersby) and Kevin Kennedy, (Curly Watts).

So we hope Mr. Dylan might approve of our plans to publish a major piece on the biography of the Coronation Street character that was Hayley Cropper and followe that with an article on the lady who acted her. Julie Hesmondhalgh now delivers so much good community work by using her skills and sharing her talents to improve literacy levels and acting abilities to enable the disenfranchised and disengaged to create life-chanoing opportunities for themsleves.

MOVING ON from the been and gone