Blog
You are here: Home1 / Blog2 / Literary3 / BRIGHT YOUNG THINGS OF THE TWENTIES 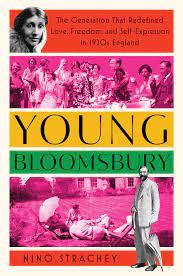 BRIGHT YOUNG THINGS OF THE TWENTIES

as mis-understood by Norman Warwick

a dull old thing in his seventies

Nino Strachey (right) is an author and historian, with a special interest in hidden or underrepresented heritage. Her books Young Bloomsbury and Rooms of their Own shine new light on the queer history of the Bloomsbury Group, revealing changing attitudes towards gender and sexuality in the 1920s. Young Bloomsbury was published in the UK in May 2022 by John Murray Press; and will be published in the US on 6th December 2022 by Atria Books.

Nino enjoys exploring the relationships between people and place, seeing buildings as biography. She has written a chapter on a 19th century female collector for a book on Jewish Country Houses, and has published articles in Apollo, the Literary Review and Country Life. She loves connecting directly with audiences, and over the last few years has appeared at the Cheltenham, Bath, Edinburgh, Blenheim, Dartington and Charleston Literary Festivals (to name just a few). She has lectured on Bloomsbury in America and Italy, and at museums, universities and historic houses in the UK.

Nino is a Fellow of the Royal Historical Society and a Trustee of the Charleston Trust, the Strachey Trust and the Strawberry Hill Collection Trust. She worked as Head of Research for the National Trust, where she led their successful application to become an Independent Research Organisation, embedding research excellence at the heart of their activities, She has been a curator for the National Trust and English Heritage, and is a graduate of Oxford University and the Courtauld Institute of Art.

We at Sidetracks And Detorus learned this only after catching a glimpse of her new book in a recent Goodreads newsletter. I didn´t recognise the name of the author, although I should have made the connection through the title. The cover image and two line accompaniment was sufficiently tantalising to send us in search of further information

A review in a national newspaper a few days later shed a blinding light over the darkness of my dim memory.

photo 2 Ýsenda Maxstone Graham was born in 1962 and educated at The King’s School, Canterbury and Girton College, Cambridge. She has written widely for many newspapers and magazines, as features writer, book reviewer and columnist.

She begins her review, for The Daily Mail, of Nino Strachey´s biographical book, Young Bloomsbury, by compelling us to identify our own age, asking  us an (im) pertinent question.

I thought there was just one gaggle of crop-haired beauties called ‘the Bloomsbury Group’, who sprawled together on the lawns of country houses or lolled on sofas in Gordon Square drawing rooms pontificating about literature and art before going off to sleep with anyone who wasn’t their own husband or wife.

But Nino Strachey — a descendant of the founder and true father of the group, Lytton Strachey — explains how Lytton, Virginia Woolf, Vanessa and Clive Bell, Duncan Grant, E. M. Forster (left) and John Maynard Keynes, all born in the late 1870s or the 1880s, were definitely the wrinklies of the group.

They gazed down with avuncular fondness and protectiveness (plus lashings of lust and a dash of envy) at the gorgeous, smooth-skinned, younger members whom they welcomed into the group after World War I, such as Bunny Garnett, Ralph Partridge, Dadie Rylands, Stephen Tennant, Roger Senhouse, Philip Ritchie, Stephen ‘Tommy’ Tomlin, Julia ­Strachey, ­Raymond Mortimer and Eddy Sackville-West.

‘They grow like asparagus shoots on the lawn,’ gushed Virginia Woolf, (right) about these young darlings, many of them educated at Eton and Oxford, and what would now be termed LGBTQ+. While Virginia and her husband Leonard were reading Macaulay’s History Of England aloud to each other in bed of an evening, the babies of the group were only just getting going.

Strachey makes no secret of her agenda in writing this book. She explains in her introduction that ‘as the mother of a child who identifies as gender-fluid and queer … I have learned some sad truths about the ongoing impact of prejudice’.

‘With queer stories so often silenced,’ she writes, ‘sharing stories of positive interaction between the generations takes on new relevance.

My child and I have found much to celebrate in the world of Young Bloomsbury, and in the queer history of our own family.’

She celebrates what she sees as a ‘brief flowering of intergenerational acceptance’ in the 1920s and 30s, when the older Bloomsberries not only made friends with the younger ones but encouraged them, supported them and made them feel comfortable in their own sexuality and gender fluidity

This was in the days when homosexuality was illegal, policemen prowled the pavements waiting to arrest any man with a powdered face, and young gay men were going off to see — or being pressurised by their parents to see — Dr Marten in Germany, who claimed he could ‘cure’ men of their homosexuality.

His expensive treatment involved psychotherapy, the writing down of dreams, and agonising injections, none of which had the desired effect. ­Strachey paints a lively picture of the goings-on between the two generations. The oldies in their mid-40s (it did seem quite old then) were astonished and sometimes tired out by the frivolity and energy of the Bright Young Things, with their hermaphrodite parties that began at 11pm, but they loved to be invited.

Red-bearded Lytton willingly dressed up as an admiral for their nautical party of 1927. He was captivated by the younger generation, falling so madly in love with the young Oxford graduate Roger Senhouse that it made him ‘want to do cartwheels over the Downs’. He liked to be spanked by Senhouse, ‘who happily obliged’ and was also willing to take part in an even more deviant-sounding ‘crucifixion ritual’.

photo 6 John Maynard Keynes, meanwhile, in his role as economics lecturer at King’s College, Cambridge, tired himself out with his affairs with a stream of male undergraduates. Lytton remarked that ‘his activities seem terrific and he confessed he was terrifically exhausted keeping it up’.

Dora Carrington, supposedly devoted to Lytton, fell in love with his niece Julia Strachey, pining for her lily-white skin while she was lodging under the same roof.

Yes, old and young did have passionate affairs with each other, both heterosexual and gay, but Strachey persuades us that they also had a remarkable gift for lifelong friendships, the old encouraging and supporting the young, and the young treasuring and rejuvenating the old.

The oldies were thrilled when young ­Raymond Mortimer put them all in Vogue when he worked at the magazine: that made them feel very up-to-date and modern.

A lot of the sprawling and flirting did indeed take place on lawns at those well-known locations Garsington, Tidmarsh Mill and Ham Spray, as well as at the epicentre in Bloomsbury.

For a few years in the 1920s it seemed as if almost every house in Gordon Square was occupied by one branch of the Strachey family or other, they and their lodgers spilling out onto landings and falling in love with each other dressed in drag at the end of Bunny Garnett’s 30th birthday party, or whatever the occasion was.

This was a ‘rare group for whom marriage was a convention over which love, whether heterosexual or homosexual, took precedence,’ Strachey writes.

I did feel sorry for some of the wives. Poor Ray ­Marshall, who married Bunny Garnett, stood by while her new husband carried on ‘pursuing amorous adventures’, meeting lots of attractive young men at the bookshop he ran in — guess where? — Gordon Square.

But Strachey is strict with us when it comes to our assumptions. When she writes about Julia ­Strachey marrying the sculptor Stephen ‘Tommy’ Tomlin (and you know from Day One it’s going to be a disaster — ‘the most dismal ceremony’, remarked Virginia Woolf, and off Tommy went to ­London for the first of his many debauches), she tells us we mustn’t have ‘a gendered view’ of their marriage, or see the wife as a mere victim of her husband’s limitless appetite for extramarital affairs.

Both husband and wife had agency: Julia herself fell in love with Gilbert Debenham, son of the founder of the department store Debenhams: so there!

‘We repudiated entirely customary morals, conventions and traditional wisdom,’ wrote Maynard Keynes of that heady time. ‘We were immoralists.’

The stuffier Victorians and ­Edwardians were left far behind, while the liberal Bloomsberries sailed on merrily into the louche 20th century..

We surely give licence don´t we to our young generation to challenge the attitudes of their elders, so long as we are there to pick them up when they learn the hard way why those attitudes prevail. Those of us so old that we still don´t get it might tut at all this talk of trans-gender and those of our age, even well intended, might get some of our responses wrong, but as Crosby Stills And Nash implored of the young, to ´teach your parents well.