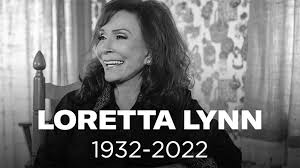 LOADS OF LOVE FOR LORETTA

for the late  LORETTA LYNN

When major events take place on the arts scene that I would have loved to attend I, like most readers, have to rely on the excellence of journalists to tell me just how good a performance. I wasn´t one of the half a million strong who arrived at Woodstock, and I wasn´t on Magic Mountain with The Kingston Trio,…..and I never got to see Loretta Lynn in concert. Neither did I fly the Atlantic to catch what I now learn, from reading Jacob Uitti in American Songwriter,  that the concert called to celebrate her life, within just a couple of weeks of her passing, was something quite extraordinary.

These reliable narrators at magazines such as American Songwriter, (and Paste on/line, too, for example) write accurately, beautifully and for the most part very objectively, although they are not afraid to wax lyrical when on a music or musician they love.

It was a meeting of the clans, a gatherfing of the family of country music old and new, and that speaks volumes of the impact and influence that Loretta had on the genre.

The offering was presented by Country Music Television and Sandbox Productions in partnership with Lynn’s family. It aired live commercial-free from the Grand Ole Opry House exclusively on CMT and was simulcast on SiriusXM’s Willie Roadhouse.

Opening the memorial, Wynonna Judd (right) with. Gaither Vocal Band and Larry Strickland delivered a chills-inducing performance of the classic hymn, “How Great Thou Art” for the night’s first standing ovation.

The show´s highlights included Jack White’s surprise appearance and powerful live performance of Van Lear Rose, the title track of his and Loretta’s Grammy-winning album. Introduced by Margo Price, fans were also treated to a rarely seen performance from Third Man Records Vault Package #24, featuring White (left) and Lynn performing Whispering Sea, a favorite of White’s and one of the first songs Loretta ever wrote.

The Highwomen’s Brandi Carlile, Amanda Shires, and Natalie Hemby along with Brittney Spencer performed the finale of Lynn’s most recognizable hit,  Coal Miner’s Daughter. Earlier in the night, Carlile also offered a solo performance of  She’s Got You .

Alan Jackson expressed his gratitude to the Lynn family for allowing him to sing Where Her Heart Has Always Been, the song he wrote for his mother when she passed away, in memory of Loretta.

He shared that Loretta often reminded him of his mother: “Loretta was always very sweet to me from the time I stepped on this stage 30 years ago. She reminded me a lot of my mama. Both were outgoing, sweet, and genuine and would tell you exactly what was on their minds.”

Lynn’s granddaughter, Emmy Russell, joined forces with Willie Nelson’s son, Lukas Nelson, to perform, to a standing ovation, Lay Me Down, the first song Willie and Loretta ever recorded together.

Keith Urban (left)  fondly remembered Loretta by playing a voicemail she had left for him inviting him to her birthday party. “Keith, it’s Loretta. I’m having a birthday and your butt better be there,” the voicemail said. Urban followed the voicemail with his rendition of  You’re Looking At Country.

photo 5 I fondly remember the BBC broadcasting a couple of tv series featuring the always effervescent Barbara Mandrell and her sister, and at this celebration of Loretta´s life  Barbara herself recalled watching the movie Coal Miner’s Daughter on her tour bus, calling Lynn an ‘iconic talent’ who was also kind, generous, and loving.

“People are watching for one reason, we all love Loretta,” Mandrell said. “There was only one Loretta.”

She then introduced Tanya Tucker, who sang Blue Kentucky Girl, accompanied by her daughters Layla and Presley on background vocals.

Martina McBride (left) shared an emotional memory of the day that Loretta inducted her into the Grand Ole Opry and remarked that ‘women of country music could not be where we are today without Loretta Lynn.’

“She was funny and fun. She was wise and a brilliant songwriter,” McBride said. “She was so real and always Loretta.”

George Strait remembered Loretta as “one helluva songwriter and entertainer,” also saying, “‘I love her and miss her dearly” as he delivered her first No. 1 hit,  Don’t Come Home A-Drinkin’ (With Lovin’ On Your Mind).

Host Jenna Bush Hager recalled the controversy surrounding one of Lynn’s biggest hits, The Pill—a song that country radio originally refused to play, but that tonight was sung by a spirited Margo Price. Then Lynn’s grand-daughter Tayla Lynn and daughter Patsy Lynn Russell took the stage and recalled their pride in all that Lynn accomplished and how loved she was by the world.

Dolly Parton shared that “Loretta was the best friend anybody could ever have.”

Taylor Swift praised Lynn for being an example for all songwriters, particularly females with her ‘truthful, fearless honesty’ in her writing.

It certainly sounds like an incredible tribute to a wonderful woman and artist.

please note logo The prime source for this article was originally published in American Songwriter by Jacob Uitti.

photo npw This article was collated by Norman Warwick, a weekly columnist with Lanzarote Information and owner and editor of this daily blog at Sidetracks And Detours.

´a defining hero of rock and roll:´ JERRY LEE LEWIS