Blog
You are here: Home1 / Blog2 / Visual Arts3 / Day 4 of Sidetracks And Detours´LS Lowry on line Festival to meet ... 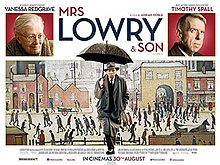 Day 4 of Sidetracks And Detours´LS Lowry on line Festival to meet MRS LOWRY AND SON.

On 12 January 2018, it was announced that Timothy Spall and Vanessa Redgrave would be joining the cast of Mrs. Lowry & Son with Spall playing L. S. Lowry and Redgrave playing his mother, Elizabeth Lowry. Spall previously played J. M. W. Turner, also a famous painter, in the 2014 biographical film Mr. Turner which won him the Cannes Film Festival Award for Best Actor. For his role as L. S. Lowry, Spall stated that, unlike Mr. Turner he did not have to take a refresher course on painting as the film had very little of it. Adrian Noble was also announced to be the film’s director, with Martyn Hesford penning the screenplay based on his original stage play which he also wrote. The film was produced by Debbie Gray under the production company Genesius Pictures.

Principal photography began in January, 2018, shooting in various locations around London and areas in Greater Manchester mainly Manchester Filming wrapped about a month later in Manchester.

On 29 January 2018, it was announced that English composer Stephen Warbeck would be scoring Mrs Lowry & Son. However, due to reasons unknown, Scottish composer Craig Armstrong took over scoring duties.

Mrs Lowry & Son is a biographical drama film set in Pendlebury Greater Manchester, chronicling the life of the renowned artist L. S. Lowry. It was directed by Adrian Noble from a screenplay written by Martyn Hesford who also wrote the original play, and considers the relationship between Lowry and his mother Elizabeth, who has reservations over her son’s career in painting. It stars Vanessa Redgrave and Timothy Spall in the title roles, with Stephen Lord, David Schaal and Wendy Morgan in supporting roles in the cast list.

The film premiered at the Edinburgh International Film Festival on 30 June 2019. It was released in the UK on 30 August 2019.

Artist L. S. Lowry lived with his overbearing mother, Elizabeth, until her death in 1939. Bed-ridden and bitter, Elizabeth tries to dissuade her bachelor son from pursuing his artistic ambitions, while never failing to voice her disappointment in him.

Dame Vanessa Redgrave DBE (left, born 30 January 1937) is an English actress and activist. Throughout her career spanning over six decades, Redgrave has garnered numerous accolades, including an Academy Award, a British Academy Television Award, two Golden Globe Awards, two Cannes Film Festival Awards, two Primetime Emmy Awards, two Screen Actors Guild Awards, a Volpi Cup and a Tony Award, making her one of the few performers to achieve the Triple Crown of Acting. She has also received various honorary awards, including the BAFTA Fellowship Award, the Golden Lion Honorary Award, and an induction into the American Theatre Hall of Fame.

Redgrave made her acting debut on stage with the production of A Touch of Sun in 1958. She rose to prominence in 1961 playing Rosalind in the Shakespearean comedy As You Like It with the Royal Shakespeare Company and has since starred in more than 35 productions in London’s West End and on Broadway, winning the 1984 Olivier Award for Best Actress in a Revival for The Aspern Papers, and the 2003 Tony Award for Best Actress in a Play for the revival of Long Day’s Journey into Night. She also received Tony nominations for The Year of Magical Thinking and Driving Miss Daisy.

A member of the Redgrave family of actors, she is the daughter of Sir Michael Redgrave and Lady Redgrave (Rachel Kempson), the sister of Lynn Redgrave and Corin Redgrave, the wife of Italian actor Franco Nero, the mother of actresses Joely Richardson and Natasha Richardson and of screenwriter and director Carlo Gabriel Nero, the aunt of British actress Jemma Redgrave, the mother-in-law of actor Liam Neeson and film producer Tim Bevan, and the grandmother of Daisy Bevan and Micheál and Daniel Neeson.

Timothy Leonard Spall OBE (right, born 27 February 1957) is an English actor and presenter. He became a household name in the UK after appearing as Barry Spencer Taylor in the 1983 ITV comedy-drama series Auf Wiedersehen, Pet.

He starred in the television documentary Timothy Spall: …at Sea (2010–2012) and in 2019 he appeared as Lord Arthur Wallington in the 6-part BBC Cold War drama Summer of Rockets.

Spall initially made his mark in theatre performing in productions for Birmingham Rep, including the UK premier of Arnold Wesker’s The Merchant, and, later, the Royal Shakespeare Company, including The Merry Wives of Windsor, Three Sisters, Nicholas Nickleby and The Knight of the Burning Pestle. At The National Theatre Spall played the Dauphin in George Bernard Shaw‘s St Joan

Following a film debut in Quadrophenia and wider TV exposure playing the awkward Barry Taylor in all four series of Auf Wiedersehen, Pet, Kevin in Outside Edge and as Aubrey the appalling chef in Mike Leigh‘s Life is Sweet, Spall has since appeared in the films Crusoe, Secrets & Lies, Shooting the Past, Topsy-Turvy, Vanilla Sky, Rock Star, All or Nothing, The Last Samurai, Lemony Snicket’s A Series of Unfortunate Events and The King’s Speech. He performed as Peter Pettigrew (“Wormtail”) in the Harry Potter film series. In 1991 he guest starred in the series 5 Red Dwarf episode “Back to Reality”. In 1993, Spall was a guest in the Scottish comedy series Rab C. Nesbitt.

He was appointed Officer of the Order of the British Empire (OBE) in the 2000 New Year Honours.

Spall performed lead vocals on the song “The Devil is an Englishman” from the Ken Russell film Gothic (1986), in which Spall portrayed John William Polidori. Spall played the starring role of Albert Pierrepoint in the 2005 film Pierrepoint, which was released as The Last Hangman in the United States. In the 2006 video game Grand Theft Auto: Vice City Stories, Spall voiced Phil Collins‘ manager, Barry Mickelthwaite. In 2007, he starred as Nathaniel in Disney’s Enchanted and Beadle Bamford in Tim Burton‘s production of Sweeney Todd: The Demon Barber of Fleet Street. He also starred as Georgie Godwin in a one-off television drama The Fattest Man in Britain on ITV 1 which aired on 20 December 2009. The drama also featured Bobby Ball, Frances Barber, Aisling Loftus and Jeremy Kyle.

In 2010, he portrayed Winston Churchill in the film The King’s Speech for which as a member of the ensemble he was jointly awarded the Screen Actors Guild Award for Outstanding Performance by a Cast in a Motion Picture. Spall reprised the role at the 2012 Summer Olympics closing ceremony.

In 2014, he won the Best Actor Award at the 2014 Cannes Film Festival for Mr. Turner, a biographical film on J. M. W. Turner directed by Mike Leigh. In 2016, Spall portrayed Holocaust denier David Irving in the film Denial, directed by Mick Jackson.

From 29 March to 14 May 2016, Spall played the title role of Davies in Harold Pinter‘s play The Caretaker, directed by Matthew Warchus at the Old Vic theatre in London opposite George MacKay and Daniel Mays.

Mrs. Lowry & Son had its world premiere at the Edinburgh International Film Festival where it was the closing film of the night, on 30 June 2019. The first trailer of the film was released on 27 June 2019. On 17 May 2019, Vertigo Films picked up the rights for distribution in the United Kingdom, and released the film on 30 August 2019.

On the review aggregator website Rotten Tomatoes, Mrs Lowry & Son has a rating of 62% based on 37 reviews, with an average rating of 6.1/10. The website’s critical consensus reads, “Mrs Lowry & Son brings a pair of outstanding actors together — and tests the limits of how much two performances can do to enliven a substandard script.” On Metacritic, the film has a weighted average of score of 42 out of 100, based on 10 critics, indicating “mixed reviews”.

The film’s reception was mixed. Peter Bradshaw of The Guardian singled out Redgrave’s portrayal of Elizabeth Lowry as “shrewd and amusingly bleak” and gave it 3 out of 5 stars, but praised the two leads for an “entertaining showcase”. Ian Freer of Empire gave Mrs Lowry & Son 2 out of 5 stars, stating that it felt “inert and dismal, hitting the same tonal register for the majority of the running time, never bringing the artist or the art to life.”

day 3 of the Sidetracks And Detours Lowry Festival: L.S. LOWRY:   GOING TO...