Blog
You are here: Home1 / Blog2 / AATA3 / all across the arts, RIGHT ROUND ROCHDALE, guided by Steve Cooke 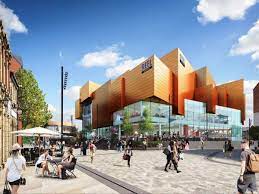 all across the arts RIGHT ROUND ROCHDALE.

JOY AND ANARCHY OF REVIVAL OF ROAD.

The Oldham Coliseum’s revival of Jim Cartwright’s Road, his 1980’s depiction of the impact of social and economic issues on northern working-class people, is exhilarating, challenging and resonant with our troubled times.

Gitika Butto and her production team have created a theatrical experience that draws you in from the moment you take your seat, through the interval right up to the final rapturous reception of the cast.

The actors (right)) wander around the stage, engage with members of the audience and then we are into the action.

A roller-coaster of emotions reflecting the highs and lows of life as experienced by people striving and in many cases struggling to survive and find relief in whatever way they can.

During the 1980’s in working class areas of northern towns different accents and ethnicities existed and were at the root of both conflict and harmony manifested through such as skinhead bovver boys and musical movements such as Two Tone. This diversity is perfectly represented by the wonderful cast.

“Exploring these ‘originally’ white working-class monologues through different lenses has been super interesting. These characters make the most of their struggles and fight to survive with some light relief; be it sex, alcohol, or Otis Redding records.’”

On a personal note, she elaborated:

“The National Front was rife in the 1980s and racism and prejudice still exist today – the character of Skin Lad – Shaban Dar – is someone I recognise in my own family, who have undergone serious trauma and attacks by skinheads and as a result have fought to survive.”

Richard J Fletcher as Scullery is the glue that holds the fast-moving changes from house to house to street to pub.

A fabulously talented cast play up to four characters each in a way that engages you with each character, their ups and downs and strategies for coping with what life is throwing at them.

A special mention must be made of John Askew’s chillingly realistic depiction of a desperate young man’s mental breakdown.

Although as someone who remembers the 1980’s well, Road is not just a vehicle for a nostalgic and rather troubled look back but an exploration of contemporary social and economic issues.

Road is at Oldham Coliseum Theatre until Saturday, October 1 and I urge you to catch it if you can.

Candid, ferocious, funny, and loud, Glowing is the new comedy theatre show devised and performed by acclaimed theatre maker, writer, performer, and new mum – Amy Vreeke (left) – in which she shares her very personal and unfiltered views on the realities of pregnancy and motherhood.

One thing Amy has always been sure of is that she wants to be a mother.

She envisioned herself pregnant, in dungarees, doing yoga and even drinking kale smoothies.

The reality of constant nausea, exhaustion and midnight sausage rolls left her questioning, when does the glowing start?

Then, nine months of pre-natal anxiety and several stitches later, Amy fell in love with the tiny human she’d made.

But with no sleep, a national lockdown and a crying baby that refused to feed – Amy found herself disillusioned with the version of motherhood we see so often in the media. And so Glowing was conceived and subsequently born…

Inspired by her own personal experiences of new motherhood and following conversations with many other new mums equally shocked and startled by the realities versus the expectations of pregnancy and parenting.

All Across The Arts is delighted to learn that Cartwheel Arts has been awarded £20,000 in funding from The Garfield Weston Foundation to help the Heywood-based charity continue delivering Art for a Reason, its programme of high-quality participatory arts projects delivered to generate social change.

“We’re incredibly pleased to receive this funding. All the work Cartwheel delivers takes place in areas of high deprivation or with people confronting issues which significantly limit their quality of life.

Many of these neighbourhoods we work in have been identified as ‘left behind’ places where residents are at increased risk of unemployment, living in poverty, lower education achievement and aspirations and poor health. So, funding like this can make a meaningful difference to people’s lives. We work with all ages from our regular early-years sessions with toddlers right up to older people in care homes.”

It is still the case that working class people, racially diverse communities and people with disabilities are under-represented in our art colleges, galleries, and concert halls.

Access to culture is a fundamental human right, and Cartwheel believes everyone deserves the opportunity to be creative.

Tractor was a rock band founded in Rochdale, by guitarist/vocalist Jim Milne (right) and drummer Steve Clayton in 1971.

DJ John Peel signed the band to his Dandelion Records label.He had a fondness for Rochdale, having worked in a cotton mill there before becoming a DJ.

Looking out of his kitchen window at Peel Acres in Suffolk, he spied a tractor in the fields adjacent to his house and recommended it as a name.

The recording was done in an attic and bedroom studio of a terraced house in Edenfield Road Rochdale, which John Peel named Dandelion Studios, Rochdale to tie in with his record label.

I recently caught up with Jim Milne who told me of another interesting and rather surprising connection with Rochdale.

“For some years I’ve been trying to get a plaque on Drake St for my great, great uncle John Milne. He was the inventor of the seismograph and studied earthquakes and linked phenomena firstly in Japan and then, after returning home, on the Isle of Wight.”

He went on to explain,

“I tried to interest the town council some years ago, but nothing happened. He is famous in Japan, where his work has saved countless lives and has a standing exhibition of him and his life in the museum on the IoW. Although born in Liverpool the family were based during his youth in Milnrow and Rochdale. The only remaining house is on Drake St.”

“I learned a little bit about him from my dad who’d obviously never met him but there was some folklore in the family about him. He was clearly a polymorph with wide and varied interests. One interesting fact is that, because he was prone to seasickness, he travelled overland to Japan through Europe and Asia, to take up his professorship at the University of Tokyo”

John Milne was born on December 30, 1850, in the Edge Hill district of Liverpool.

He spent his early life and formative years in Rochdale at 147 Drake Street and later Tunshill House.

Geologist, engineer, and seismologist John Milne is known as one of the most significant contributors to the understanding and evaluation of earthquakes, developed the first international network for seismological data, and created what may be considered the world’s first modern seismograph.

Come on Rochdale! Surely John Milne should be remembered in our town by more than A Premier Inn!

all content By Steve Cooke. You can read all across the arts Every week in The Rochdale Observer in print and on-line

Meanwhile, after a short break Steve Bewick, also based in Rochdale, returns to the air waves, with his Hot Biscuits jazz programme on mix-cloud. This is a live session from the Steve Oakes Quartet, led by Steve on guitar, Edward Toots Kainyek on saxes, Tim Franks drums and Elliot Roffe Bass. A hot quartet recorded at the Creative Space. There is more in the mix mix from Art Themen, Andy Panayi Jazz, Neil Angilley Trio, Samara, Barb Jungr and the Sam Braysher Trio. Follow Steve, and maybe tell all your friends that they, too, can listen in by opening the embedded link below.