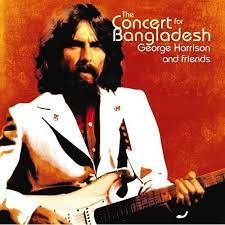 IN PRAISE OF GEORGE + bits and pieces

A lot of ocean has waved several time around the world since the days of the eighties and nineties when my then pre-teen son, Andrew, (left) often listened to Beatles music. These were the days, as Paul would have written for Mary Hopkins, when Andrew and I went to see Macca in concert in Liverpoll and Andrew, aged about nine or ten, had what Mrs. Merton might have called á heated debate´ with Gary Hall about the qualities in The Beatles he thought Gary might have overlooked. My son is forty two now and lives in South Korea and plays the banjo, and I and his mum live here on Lanzarote, where she still loves me evcn though I´m a few years older than sixty four.

Nevertheless, it seems like some other long-held assumptions have been re-addressed. As I started to write a piece about Paul McCartney´s gig at Glastonbury the other day I mentioned to Andrews in our weekly Skype that I was doing so. I remembered Andrew´s love of The Beatles, and I know he is still interested in their music. Perhaps because of the Liverpool concert of McCartney´s which we attended I had been sure that Andrew would naturally agree with me that it is Macca of the Fab Four who has written the best music in the post-Beatles careers.

photo 2 george Harrison ´No, I think that would be George Harrison,´ sighed Andrew. ´He never gets the credit he deserves. I found there might be plenty of others who would agree with Andrew.

Let me in here, I know I’ve been here/ Let me into your heart,

Harrison (right) sings on “I’d Have You Anytime.” Despite singing to a rather ambiguous you, many of us would like to think that the late Beatle was singing to our hearts—his fans—as a plea for individual recognition and release post-band breakup. And it worked. Harrison’s solo career was one composed of timeless hits that continue to inspire artists today.

But let’s not beat around the bush; let’s get to the heart of the matter. Below we get into just a few of Harrison’s hits, in no particular order. Read below for some of George Harrison’s best songs from his time with The Beatles and into his solo career.

The most appropriate place to start any roundup of George Harrison songs is with his most commercially successful song, My Sweet Lord. Not only was My Sweet Lord the top-selling U.K. single in 1971, but it was the first number one single from any of the former Beatles.

George Harrison was often labelled “the quiet Beatle” in the heyday of the British quartet’s career. Perhaps this nickname came about because of Harrison’s role as lead guitarist or the backseat he took in interviews with the press. Regardless of Harrison’s perceived quietness, the late Beatle had a lot to say in song. And after The Beatles broke up in 1970, Harrison dropped his first solo single, “My Sweet Lord” just seven months later.

My Sweet Lord has overt religious connotations and references. What makes the religious content of this song different from most, however, is its usage of both Christian and Hindu terminology. Harrison’s goal in combining both religions in one song was to call out religious sectarianism, or the perceived notion of conflict between groups. To put it simply, Harrison just wanted everyone to get along, so he wrote a song.

Within the song itself, the Christian references appear via the repetition of My sweet Lord, as well as using the call to faith phrase Hallelujah. Also in the lyrics are the phrases Hare Krishna and Hare Rama, which praise the Hindu god Krishna.

Harrison’s lyrical attempt to bridge a divide between Christianity and Hinduism was one meaning of the song. There is also a hint of impatience in the Harrison penned track. Really want to see you, Lord, Harrison sings, But it takes so long, my Lord (Hallelujah). This verse speaks to Harrison’s own spiritual journey in which he heavily studied Eastern religions like Hindu. In his exploration, Harrison was particularly drawn to the Indian Hindu monk Swami Vivekananda’s teachings. One such teaching, “If there’s a God, we must see him. And if there is a soul, we must perceive it,” was an inspiration for My Sweet Lord.

Harrison wrote Here Comes The Sun for The Beatles’ famous album Abbey Road. The actual writing for the track happened while Harrison was visiting his friend and fellow musician, Eric Clapton, at his country house. The song turned out to be irresistibly upbeat, and on a broader scale, it offered hope for a new future after the trials of the ’60s counterculture movement.

Something, a track that Macca (left) played at Glastonbury as he spoke warmnly of George, is another track that Harrison wrote forAbbey Road. The song lyrics read like a love poem, which it essentially is, and the song won the Ivor Novello Award for the Best Song in 1969 but George stockpiled for his eventual solo career.

If Not For You (1970)appeared on Harrison’s debut solo album, All Things Must Pass, but was originally written by Bob Dylan. The American singer/songwriter had written the track about his first wife, Sara Dylan, and released it before Harrison on his record, New Morning. Harrison’s version, though, is more melody-focused than Dylan’s.

Got My Mind Set On You was recorded by George in 1987 andthis list of George Harrison songs wouldn’t be complete without this cover song. (We’ve got to cover all of our bases here.) Got My Mind Set On You was written by Rudy Clark and first sung by James Ray in 1962. Harrison’s cover of the R&B tune was released on the last album he released during his lifetime, Cloud Nine.

Harrison wrote Ballad of Sir Frankie Crisp (Let It Roll) as a tribute to the original owner of Friar Park, a Victorian Gothic home that Harrison bought to be his family home. Olivia Harrison, George Harrison’s widow, still resides at Friar Park.

Isn’t It A Pity was included on Session Outtakes And James / Take 14 ”(2020 Remaster). Now, we all this song but have you heard the outtakes from the recordings of the song? They’re almost as good as the final cut. Check out one of any of the “Isn’t It A Pity” outtakes available on line.

I´m not convinced yet there is enough objective proof out there to confirm Andrew´s assertion that George Harrison has produced the best post-Beatles work and certaionly mot writers on the subject feel inclines to return to his Beatles contributions as if they art somehow evidential !? In truth, though, I guess it all down to personal opinion.

However, when I attended my first university seminar, at the age of fifty, surfrounded by half a dozen bright young things, one of them began to flounder in a defence of Lennon and McCartney as poets. In an attempt to help, and perhspa show off a little, I leaned into the conversation and said,´well, if you want my personal opinion,….´

¨We don´t,´ said my professor in the role of a smiling assassin. ´We can get personal opinions in the pub. We´re interested in your argument, empirical evidence and your conclusion´.

I have carried that with me over the past twenty years and have repeated it often to Andrew. Nevertheless we have had long discussions about Harrison and McCartney and I´m not even sure we have yet set the parameters of the argument. Surely, it would be too dull and dry to produce sales figures, numbers of cover versions etc,…. I would say that, in my personal opinion more of McCartney´s tunes pass the old grey whistle test (i.e.) Mull Of Kintire than of Harrison´s, … and of those of Harrison´s that do, some have been accused of being derivative at least or plagiarism at most.

But that´s another argument that might be only about opinion !

Svetalana Meschaloya  and Slava  Biderack will deliver classical music via her cello and his piano, including music from Schumann, Elgar Chopin and others. The ticket prices for adults are £15, for Pensioners £13, students  £5 and children only £1-00 for a concert that will also include a break for tea and biscuits.

Even without knowing the full programme and not having yet received any information about the players I have no hesitation in recommending the concert to any of our music loving readers who may be in the region on the day. If there are any ticketsd unsold at that time, they will be made available on the door before the concert. It is perhaps safer to reserve your tickets, though, by phoning Graham on 01706 642139.

All Rochdale Music Society presentations, sponsored on this occasion by Holroyd Precision Rotors,  invariably deliver excellent value for money but  there will also be a 10 per cent reduction given if you purchase two or more tickets.

Sidetracks And Detours look forward to hearing from anyone who does attend the concert and invite you to post your own review normanwarwick55@gmail.com

We will publish them with your permission and fully attribute. So feel free to include a short bio and photo of yourself so we can include if at all possible.

Meanwhile you should perhaps check out