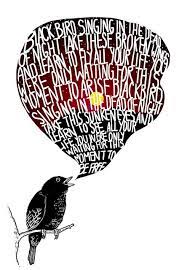 VOICE TO THE BLACKBIRD + bits and pieces

Though The Beatles (left) had many overt protest songs, notably “Revolution,” another song that is just as politically charged, though I didn´t realise it at the time, is Blackbird.

The delicate track features a single guitar line supporting Paul McCartney crooning out the lyrics. Every so often, a few chirps from a bird can be heard as a nod to the song’s opening refrain blackbird singing in the dead of night.

However, this song has nothing to do with ornithology and is instead a commentary on the on-going Civil Rights Movement of the ’60s. Let’s dive into the meaning of the song’s lyrics below.

McCartney cites the moment Little Rock, Arkansas, schools (right) decided to desegregate as a driving force behind the song. Sitting in his kitchen in Scotland, McCartney picked up his acoustic guitar and began to flesh out the simple tune.

“I was sitting around with my acoustic guitar and I’d heard about the civil rights troubles that were happening in the ’60s in Alabama, Mississippi, Little Rock in particular,” he later said in an interview with GQ magazine..

“I just thought it would be really good if I could write something that if it ever reached any of the people going through those problems, it might give them a little bit of hope. So, I wrote ‘Blackbird.’”

Only three sounds were tracked for the final recording: McCartney’s voice, his Martin D-28, and tapping that keeps time on the left channel. The origin of the tapping is a bit of a mystery, although in The Beatles Anthology video McCartney appears to be making the sound with his foot. The bird sounds were later overdubbed from the collection at Abbey Road Studios.

The lyrics as a whole are very symbolic. Playing on a hidden meaning of the word “Blackbird,” McCartney references The Little Rock Nine – the brave Black students that stood in face of racism by attending a formerly all-white school (more on this later).

McCartney uses a repeated opening line for each verse, beginning with Blackbird singing in the dead of night. He then switches out the lyric, praising the students for enduring despite their broken wings and sunken eyes.

He finishes off the verses with another refrain, acknowledging the struggle for equality they have been fighting their entire lives, waiting for their moment of freedom to arrive.

Nine Black students drew national attention in 1957 when they enrolled at a formerly all-white high school in Little Rock, Arkansas. Their attendance at the school was a test of Brown v. Board of Education, which was ratified by the Supreme Court just a few years earlier.

The court’s decision ruled that segregation in public high schools was unconstitutional, seemingly paving the way for racial equality across the country – although Arkansas Governor Orval Faubus didn’t see it that way.

Later that month, federal troops were brought in to escort the students, drawing international recognition of the Civil Rights Movement – notably McCartney.

McCartney met two of the women, Mothershed and Eckford, at his Little Rock concert on April 30, 2016. He took to Twitter after the meeting to say, “Incredible to meet two of the Little Rock Nine–pioneers of the civil rights movement and inspiration.´

Many novice guitarists have plucked along to McCartney’s iconic guitar trill since its release, cementing its integral place in music history.

Covers of the pervasive song have cropped up around the decades, keeping, arguably, one of McCartney’s best writing efforts alive.

Everyone from Sarah McLachlan to Billy Preston has lent their voice to “Blackbird” at one time or another but the only cover version that made it to the charts was a Glee Cast recording in 2011.

Crosby, Stills & Nash (right) gave a similarly honeyed version of the song in their 1991 box set. The group performed the cover live often, notably during their set at Woodstock Festival in 1969.

I have mentioned Lennon´s social commentary and xxx reminded us of Lennon´s far more obvious protest call for a Revolution, which I felt at the time was a Dylanesque call for Mankind to rewind to the beginning and to start again. I suppose tht at the time, as nowt but a child, I had vague notions that Paul´s song was a summoning of the spirit, but I interpreted everything on those days as proclamations of love. I took the song as being about a girl who had left her lover, and that lover´s realisation that she had wanted 7 needed her freedom.

I am grateful, therefore to Alex Hopper, writing in American Songwriter, for setting me right with this much needed revision.

Sidetracks And Detours and the all across the arts page run by Steve Cooke in The Rochdale observer have previously reported on this whole remarkable story. It tells of two close Rochdale families, a dedicated sister and her best friend, who adapted sign language to song lyrics for a profoundly death brother who can feel the rhythm when a song plays on the radio and then can see the lyrics when his sister´s newly-formed group delivered them. The group hit Britain´s Got Talent, gathered national public and political support and are now changing the way we approach the impossible !

There is no wonder Rochdale has a feel good factor and no wonder my former colleague Steve and his aata team always have so much to writer about.

The air waves are alive and buzzing again this week.

Our good friend, AJ the DJ  Hendry, has told Sidetracks And Detours  that she has invited a very special guest on to her show The Perfect Storm tonight, Monday 8th August at 5pm on Monster Radio. She tells us she is looking forward to a lively and fun interview with a witty and dynamic Microbiologist, which might be words we don´t expect to see in the same sentence ! However Nance Larkin (right) is also a food safety specialist and social marketing and web designer. AJ will therefore be asking Nance  about her life here as an islander, her career and hearing her musical choices. Why not tune in to Monster Radio Lanzarote 99.9fm or listen via the website monster radio.es or the radio garden app.Monster Radio Tias ?

Meanwhile, another radio buddy of ours, Steve (left) has a new presentation of Hot Biscuits, a jazz filled programme from the UK via mix-cloud. Steve tells us the show includes extracts from a live gig from Stuart McCallum at Creative Space, Manchester. Mr. BNewick says we can expect some smart electric guitar sounds. Also included is music from Kat Eaton, her recent single, Meg Morley Music, Racheal Calladine, Robert Castelli & Boom. If you like the sound of this tell your friends and join Steve for Hot Biscuits at

The prime source for this article was a piece by Alex Fuller in American Songwriter. Check out the magazine on line for scores of similar thought-provoking work.

o The purpose of this daily not-for-profit blog is to deliver news, previews, interviews and reviews from all across the arts to die-hard fans and non- traditional audiences around the world. We are therefore always delighted to receive your own articles here at Sidetracks And Detours. So if you have a favourite artist, event, or venue that you would like to tell us more about just drop a Word document attachment to me at normanwarwick55@gmail.com with a couple of appropriate photographs in a zip folder if you wish. Being a not-for-profit organisation we unfortunately cannot pay you but we will always fully attribute any pieces we publish. You therefore might also. like to include a brief autobiography and photograph of yourself in your submission.