Blog
You are here: Home1 / Blog2 / Music3 / the return of GLASGOW JAZZ FESTIVAL 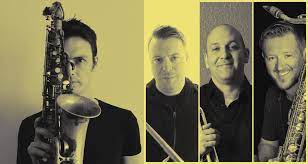 the return of GLASGOW JAZZ FESTIVAL

Jazz On A Sunday in Rochdale

to perhaps to become

Jazz on A Tuesday in Chadderton

Sidetracks And Detours are delighted to have received an e mail from Alan Lawless, a former colleague. Alan was a regular contributor to the all across the arts column in The Rochdale Observer, that my former partner Steve Cooke has so excellently maintained, improved and embedded into the local community since I retired over here to Lanzarote seven years ago. Alan used to report on the Jazz On A Sunday events that were such a popular part of the Rochdale arts scene, drawing guest performers from all over Great Britain and even sometimes the further reaches of Europe. The sad deaths of one or two key members of the club and the ravages of covid and lockdowns seemed to have finally locked the doors at the venue, but Alan has news for us. So come follow your art down the sidetracks and detours and listen to the band.

Alan´s e mail, addressed to Steve Cooke at all across the arts, Steve Bewick at Hot Biscuits jazz studio and myself here at Sidetracks and Detours, read as follows.

Post-Covid, in as much as we can accept that we are “post” Covid, the Jazz On A Sunday, (JOAS) committee were resolved to try and get things going again and following a meeting a week or so ago I put together a short piece (attached) which if acceptable we hope you will feel able to dip into and extract and use in such form as you feel able.  Hopefully I will in future be able to submit reports of actual gigs in my own deathless prose for consideration.

Thanks Alan: Sidetracks and Detours will always include any previews or reviews and phtos you are able to send

We have now arranged our first live concerts of the new era.  As you will appreciate some venues have gone out of business altogether, others including our long standing New Town National Club hosts, have had to tighten their belts and for one reason or another are unable to accommodate us on Sunday evenings  so the JOAS “brand” is having to be put on hold until we can take a fully considered view of how things are most likely to develop.

Pro temp, therefore, it is going to be “Jazz At The Reform Club” in Middleton Road, Chadderton for two Tuesday night sessions viz

This band (right, Photographs taken at Crofter’s Jazz Club,  2nd May 2010, by Barrie Marshall) is  well known on the European Scene having spent the last twenty years touring, playing in all the major clubs and festivals from Norway to the Canaries. More recently two tours to Australia, several to Canada and a memorable one to California, have been part of his professional experience. Martin first visited New Orleans in 1966 and got to know, on a personal basis, George Lewis, Jim Robinson, Dede and Billy Pierce, the Humphrey brothers, and then in 1978, met up with Greg Stafford, at that time a very young beginner, but who nowadays is much in demand on the European scene. Medical problems forced him to give up playing trombone, but he has reconstructed his career on the keyboard, keeping vocals as part of the programme. He has put together a band of musicians he is proud to present as the Old Green River Band, a mix of old heads and young blood, all with the shared intention of playing top class music with integrity and passion.

The Band includes  Chez Chesterman has a long professional background playing driving funky solos as well. He’s known to make the occasional vocal, and has a very energetic approach to his music, and like Howard, has a lively sense of humour.at the highest level. He is a most exciting trumpet player with a vast repertoire. His stagecraft is of the highest order and his organisational skill brings a lot of his experience as a band leader to the fore. Among the great British musicians with whom Chez has been associated are Monty Sunshine and Dick Charlesworth, a highly respected pair on the European jazz scene. He has a gutsy jazz voice making his vocals earthy and full of gusto!

Reed player Howard Murray is a most talented reed player and well established on the Manchester scene, with a solid reputation for inventive solos. His musicianship is of a very high order, and when not engaged on the jazz scene, he is to he found working with young musicians. He has an encyclopaedic knowledge of pre-war, wartime and post-war radio comedy!

Trombonist John Finch comes from a deep pool of musicians that came to prominence in the London area over 40 years ago, where he played with every band of worth around at the time. He plays in his own style and can offer sweet solos when required and, like Howard, has a lively sense of humour.

Admission will be £8 payable at the door, and the venue has  excellent parking facilities in the immediate vicinity.

or by email to alanlawless17@gmail.com

It seems that JOAS, or whatever the acronym for the newly named organisation might be, are taking some carefully planned baby steps to test the receptivity to their plans and the feasibility of providing the excellent levels of jazz music they became know for.

Watch this space. We will keep you informed.

The Cultural and Creative Cities Monitor 2019 report looked at 190 cities from across 30 European countries and ranks 29 different aspects of a city’s cultural health, including its cultural vibrancy, creative economy and ability to attract creative talent and stimulate cultural engagement.

The report states: “Glasgow was one of the first European Capitals of Culture, in 1990. Known as an industrial city, it has now gained recognition as a creative and cultural centre of European importance.”

To illustrate that the above paragraphs are more than simply a historically accurate record there are things a stir in Glasgow that show the piece to be still relevant today. Jazz will be the sound of the city this summer with over 24 events taking place across 4 days as part of the 36th Glasgow Jazz Festivalwhich runs from Thursday 16th – Sunday 19th June 2022.

The city stages a festival where veteran fans cross paths with jazz newcomers, in a city that will come alive with jazz for four unforgettable days and nights, Glasgow Jazz Festival offers a programme that is as fresh, vibrant and exciting as ever

There will be performances from some of the biggest names in jazz, blues, soul, funk, R&B and world music taking place across the city’s stages. This will be the first time the event has taken place with in-person audiences since 2019 and will be warmly welcomed  back to venues across Glasgow which will be set to burst with jazz talent next month.

Legendary American jazz bassist Buster Williams will play St Luke’s with his all-star quartet, including iconic jazz funk drummer Lenny White, on the closing night of the festival. Perhaps best known as one of the first members of pianist Herbie Hancock’s early 1970s group, Williams has also been the accompanist of choice for many singers, including Nancy Wilson who he toured extensively with throughout his career.

On the Saturday night, festival favourites the James Taylor Quartet  (right) will take to the stage at Óran Mòr. Dubbed as one of the most important jazz-pop crossover outfits on the British music scene, the four piece will showcase their relentlessly entertaining tunes that draw influence from the rare-groove style funk and the boogaloo funk of the 60s and 70s.

Leading jazz vocalist Georgia Cécile (left)  will headline St Luke’s on Saturday 18th June. Having recently toured with for Gregory Porter, the young singer-songwriter is undoubtedly at the helm of the new wave of UK jazz-pop crossover artists. Her music has a timeless and cinematic quality that fuses jazz and soul influences with a contemporary edge – a sound that is sure to come into its own surrounded by the special acoustics of the East End venue.

Multi award-winning saxophonist and composer Binker Golding will perform a mixture of jazz, blues and Americana at the Blue Arrow Jazz Club on Saturday 18th June. Alongside his quintet he will showcase the talent that has had him crowned ‘Instrumentalist of the Year’ by Jazz FM in 2020.

A special all-day event, curated by the acclaimed Glasgow DJ Rebecca Vasmant, will take place at Óran Mòr on Sunday 19th June. Entitled “With Love, from Glasgow”, this unique event will be a festival within a festival and will feature Paix, Azamiah, Blue Boar Brass, Mama Terra and Era Suite. There will also be DJ sets from Nick Peacock, Chris Astrojazz and Rebecca Vasmant.

Each and every one of Glasgow based Rebecca Vasmant’s DJ sets and productions is the product of a lifetime spent digging for the less-heard, the unknown and unexpected. With a fast-growing reputation for her unparalleled knowledge and appreciation for music in its many forms, Rebecca Vasmant (right) is one of the most exciting artists in the UK scene. Her story started in Glasgow, where she has spent years promoting her own parties, holding a residency and record fairs at the esteemed Sub Club, all the while holding a regular spot on BBC Radio Scotland. Bringing her sounds further afield, Rebecca also hosts a monthly radio show on Worldwide FM.

When she’s not spinning records, Rebecca regularly brings her creative energies to the studio and stage through composing and producing her own music and live performances. In the live scene, Rebecca has embarked upon a six month tour with eight-strong Ghanaian outfit Kakatsitsi, as well as creating her own live project, which features world class musicians from The Scottish National Jazz Orchestra. In the studio, Rebecca has flexed her production skills on her now sold-out debut album ‘With Love, From Glasgow’, released on her own burgeoning record label, Rebecca’s Records.

Although Rebecca’s love for jazz music is particularly irrepressible, her DJ sets journey across many sounds and genres, and she has brought these experiences to renowned clubs and festivals across the world, including the likes of Worldwide Festival, We Out Here, Dingwalls, Brilliant Corners, Glasgow Jazz Festival, Kelburn Garden Party, Riverside Festival, EFG London Jazz Festival, Jazz Cafe, Djoon Paris and Ronnie Scott’s.

Glasgow-based Azamaiah are a genre-fluid collective led by INDIA BLUE (vocals) and consisting of Josef Akin (keys), Alex Palmer (drums), Norman Villeroux (bass), Romy Wymer (harp) and Finn Rosenbaum (percussion). Azamaiah recently recorded their debut album, set for release in 2022, which is the product of collaborative improvisation and three years of writing and home recording. The band’s output is inspired by sounds of the natural world blended with Latin American rhythms, choral music and R&B.

The 36th Glasgow Jazz Festival brings its annual supply of world class musicians and upcoming superstars to the city’s already vibrant jazz scene. Glasgow will be transformed with a wealth of home-grown and international jazz talent from Thursday 16th until Sunday 19th June 2022.

Meanwhile tickets are now on sale for the Glasgow Jazz Festival and the full programme is now live via www.jazzfest.co.uk