Blog
You are here: Home1 / Blog2 / AATA3 / How we celebrated CANARY ISLANDS DAY 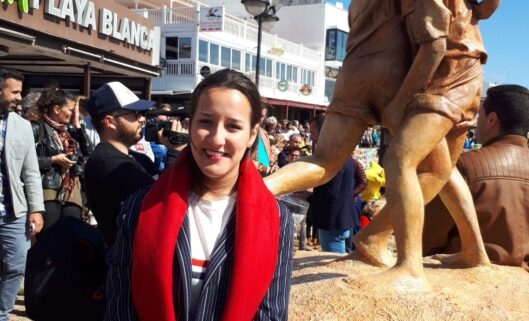 These eight islands (la Graciosa only becoming a fully fledged member a couple of years ago) form an autonomous community of Spain, but are closer to Morocco and the Western Sahara. The Canary Islands were known to the Romans, but remained independent. The Spanish invasion of the islands began in 1402 CE. The islands were incorporated into the Kingdom of Castile in 1495 CE. They became an autonomous community of Spain on August 10, 1982. The autonomous Canary Islands Parliament’s first session was on May 30, 1983.

The Canary Islands’ flag (left) is one-and-a-half times as wide as it is high. It consists of three equal vertical bands coloured white, blue and yellow. The coat of arms of the Canary Islands is on the blue band at the center. The coat of arms consists of a blue shield supported by two dogs. There are seven images of islands on the shield. These represent the seven largest inhabited Canary Islands. A red crown is on top of the shield and a banner with the word “Oceano” is above the crown

May 30th is a bank holiday in the archipelago. It celebrates the first official Parliamentary session held by the Canary Islands Government. This was some ten months after the islands became an autonomous region of Spain.

The Canary Islanders always seem to us to be happy, smiley people content with their lot in life. And what a lot in life they´ve got !  My wife Dee and I always remind each other that the sea, the sand, the sun and the stars in the sky provide the greatest free show in the world. With a supporting cast of pretty white houses, theatres and restaurants, Lanzarote can also offer shadow-dances over Timanfaya as the volcanoes seem to change colour before our eyes.

In 2022, Día de Canarias fell on a Monday, and as you have read, opening happenings took place throughout the preceding weekend.

Perhaps many of the traditional activities are similar across all the islands but one thing is for sure: traditional costumes are a must, and they do differ slightly from island to island. If you were here at the weekend, though, you cannot fail to have noticed how Lanzarote men and women (or conejeros and conejeras) dressed for the occasion.

Canarian people are proud of their roots, and the Baile de Magos is one of the most traditional dances. In Lanzarote, you may also come across the Sorondongo. In traditional costumes, the islanders dance in pairs and swirl around accompanied by musicians playing the timple  a small five-string guitar similar to the ukulele. The timple is the most ubiquitous instrument on the island and we are fortunate, of course, to have a number of master-players on the island.

The  Museo del Timple  (Timple Museum) in Teguise is well worth a visit to discover the history of this wonderful instrument so closely linked to Lanzarote culture. In fact, in most Sundays of the year, when the famous Lanzarote Market is bustling in the square, the museum offers a calm oasis for an hour or so, with lunch-time concerts in the buildings lovely, shaded courtyard.

On Canary Islands Day, though, all the sporting activity increases as families, friends and children enjoy some of their favourite traditional sports and games on this Canarian public holiday in villages all across Lanzarote. They range from fun activities to exhibitions and spectator sports:

Lucha Canaria, which is the real name of the Canarian wrestling   you’ll see performed in exhibitions on Canary Islands Day (see our cover photo at the top of the page)). From what we have seen, (and we often watch young children and adult sensies (or the equivalent of that karate title), train and practice on the town beach in Playa Blanca on a Monday evening. If you live here, or have holidayed here recently, you will have noticed the statue of two young wrestlers on the walkway above the town beach. This was created by Cintia Machin Morin (right) one of the most well known sculptors on the island with several Lanzarote installations to her name.

Other sports and games commemorated on Canary Islands Day include Bola Canaria or pelota, and petanque which to we English seem to be the same game to us, but the balls seem heavier in Bola Canaria.

The races with Jolateros are not exclusivly a Canarian Day activity, and you may notice them while strolling around the Arrecife seafront promenade on the way to Charco San Ginés. These small traditional metal boats are historically fashioned out of disused tin barrels used for importing food and water during tougher times in the past. Locals turned the barrels into boats to be able to transport goods between the island’s harbours.

Another activity, Salto del pastor  is alsocalled “brinco o salto canario”, it is a traditional practice unique to the Canary Islands whose uses and customs were typical of the indigenous societies of the archipelago. It basically consists of using the tool of the Canarian shepherds to help us walk and move through irregular terrain and with strong slopes and unevenness.

There are also many activities for children and adults alike on Canary Islands Day which highlight culture and traditions. Many towns organise a special programme of events, including arts and crafts workshops for all:

You can take part in the craft of Barro, getting your hands dirty whilst making your own clay pottery.

Rosetas is the name for  making your rosette lace flower to decorate your fashion garments.

By attending an Empleita workshop you can create an original key-ring with palm tree leaves.

You could also learn how to make your own green and red Canarian sauces, for the lovely Lanzarote taste.

A good place to try your hand at these traditional arts and crafts at Casa-Museo del Campesino  at any time of year, not only on Canary Islands Day. Built by  César Manrique with the help of local people, this  Tourist Centre,  in San Bartolomé, pays homage to the culture, architecture, and traditions of the Lanzarote people.

However, you won’t have to go very far, and you’ll also find plenty of celebrations in other parts of the island. There are  seven municipalities in Lanzarote, and each one will have its own programme of events.

One not to miss is the  Teguise market on Sunday, with a myriad of stalls selling handicrafts, and which will have a special programme in the Plaza de la Constitución by the church.

Also worth a visit is the northern town of  Haría which will be exceptionally colourful during the Saturday arts and craft market in the leafy town square.

The municipality of Tías will host in the Terrero de Lucha Ulpiano Rodríguez Pérez of the town of Tías on May 30, the Institutional Struggle of the Day of the Canary Islands in which representatives of other islands will participate. On the same day, in the Plaza del Varadero in Puerto del Carmen, craft workshops and musical performances will be held.

In San Bartolomé, the Casa-Museo del Campesino is the perfect place to enjoy the Día de Canarias and to immerse yourself in the island’s history, and you can also savour some of the best tapas in Lanzarote.

You can also enjoy typical dancing and music at the Mancha Blanca Farmer’s market in the municipality of Tinajo on Sunday. And while you’re there, why not also buy some fresh local cheeses, wine, fruit, and vegetables?

Canarian potatoes are probably the most well-known dish in Canary Islands cuisine. But there’s a lot more to authentic Lanzarote cuisine than Canarian potatoes! Try a slice of authentic Tortilla Espanol, for instance in the San Migeul bar and restaurant in Teguise !By the way,…….what a wonderful slice of Lanzarote life we have enjoyed over the weekend of Canary Islands Day.. about 500 people danced the night away to folk lore groups in Yaiza square outside the church, in a wonderful atmosphere under a magnificent sunset.

There were performances by several folk-lore groups, with most of the songs drive by guitar, timple and percussion and ensemble voices that, in the choruses, sounded like a roar.

The lighting was angled in to  nooks and crannies around the square and up into the trees, and as the wind gently skittered the leaves and branches it was if we were looking up into the sky in a trippy, Beatle-esque magical Mystery tour kind of way.

photo church At civic and social events like this on Lanzarote, the church and its faith is never far away. Indeed, as darkness fell, the lighting was beautifully thrown up the front wall and doors of the church at the end of the square.

Dee decided to have  a wander down to the ´loyal friends and front row dancers´, at the foot of the stage and bumped into a a Spanish lady from her yoga group who was in national costume, as were scores of others, and it was a many splendoured thing

The following morning we wandered down into the town of Playa Blanca where Orchestra des Yaiza were playing at ten in the morning to welcome in Canaries Day. The highlight was a young man of eight years old playing a solo spot of What A Wonderful World on the trumpet (left) and it was good to be reminded of what a wonderful world this really is, despite Putin´s insanity.

In a story similar to the one Liz Yaskiel had told us the other day about your plumber, we were listening to the small orchestra   playing tracks like Let It Be. Suddenly we were nudged in the back, and turned round to see Freddie, our Venezuelan builder, whom we only see once every couple of years. He was babbling away excitedly in Spanish, and when Dee managed to slow him down to speak into her phone, he was smiling proudly to tell us, ´that´s my son, that´s my boy´ and pointing to a young lad, of only thirteen we later learned, playing the cornet.

When we lived in the UK, Dee and i were fortunate enough to have local places to stroll around, of course, such as Hollingworth Lake (see tomorrow´s post, and had a bandstand in our own local Queen´s Park in Heywood. We had major musical ensmbles such as Besses O´The Barn Brass Band and folk groups who would play on bank holidays or other special occasions. The weather here on Lanzarote is more conducive to such events though, and for ever sunny day we spent watch theannual brass band festival in Uppermill, we spent a hundred days soaked wet through under dripping trees, listening desultory perffromances by musicinas playing against the British weather.

This event each year on Lanzarote really does celebrate The Canary Islands and the genuine pride and enthusiasm of participants is never dampened by that spitting drizzle that as comedian Peter Kay used to say in the UK, ´goes right through you´!.

When the performance was over Freddie (right) gathered his family around him and introduced us to his lovely wife, two sons and his daughter and we all chatted away for fifteen minutes, all of us smiling and laughing but never quite understanding.

That he was so proud to introduce his family to us made us, too, feel proud of them and our island.

RADIO AND  HOT BISCUITS WITH BEWICK