Blog
You are here: Home1 / Blog2 / culture and tradition3 / ASTRONAUT MATTIAS MAURER speaks of the link between humanity and the c... 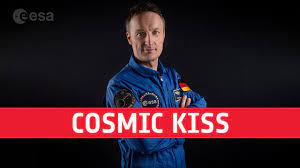 speaks of the between humanity and the cosmos

and Norman Warwick listens in

Of course it must be spectacular, mind-blowing, life changing to have a window seat on the International Space Station and look out in jaw-dropped, goggle- eyed wonder at stars in the moonlight, and maybe take in the local derby match between Jupiter and Mars. However, for Mattias Maurer, a former student at The University Of Leeds, one suspects there was slightly more to it than that, and the report he gave to the University alumni magazine Leeds, certainly suggests that.

I first became an astronaut in 2008, he told Leeds. I saw on the TV that the European Space Agency wanted new astronauts, and I thought ´what does an astronaut actually do? ‘The answer is that they are scientists, love technology and work in international teams,… all things that I thought made me a good fit for the role.

Nevertheless, it was thirteen years between my original application and my first space flight. It was a long time to wait, with a lot of ups and downs. But if you have a dream and want to achieve something, you don´t let the first obstacle stop you

My year studying in Leeds on the Erasmus Scheme was perhaps the beginning of it all. it was an incredibly enriching experience. I was able to immerse myself in the English Language and the student, whilst being exposed as well to other cultures and languages. I was also able to join other exchange programmes in France, Spain and So8th America. So Leeds really equipped me to become part of an international team.

My mission, Cosmic Kiss, is supporting around 150 experiments in fields like human health and materials science, benefitting both life on earth and the future of space exploration.

The name of the expedition, Cosmic Kiss is a declaration of my love for space, communicating the special connection the ISS provides between humanity and the cosmos. It conveys the value of partnership in exploring further, alongside the need to create a sustainable future on Earth.

When the very first astronauts flew, the challenge was with the actual flying. Now the journey is fully automated and only takes one day. The challenge of being aboard the ISS is using micro-gravity and performing research you cannot do on the ground.

Being outside in space is every astronaut´s dream b because you have the best possible view of earth, with just a thin layer of polycarbonate between you and the vacuum of space.

I´m part of a team hoping to put the first European on the moon. We need ambitious people to push the envelope and share their dreams. I´m very positive that I will see people land on Mars in my life time.

Sidetracks And Detours would not let any of our readers go wandering off into space without a special soundtrack to accompany them.

a soundtrack for an International Space Station, compiled by Sidetracks & Detours

recommendations by Sidetracks And Detours

Lucy In The Sky With Diamonds by The Beatles

Fly me To The Moon by Frank Sinatra

Drops Of Jupiter by Train

Walking On The Moon Last Night by Katy Moffatt

Stars And Plkanets by Liz Phair

Man On Mars* by Kaiser Chiefs

Acquarius, Let The Sun Shin In by 5th Dimension

Star Trekkin´ by The Firm

Across the Universe by The Beatles

Shame On The Moon by Rodney Crowell

Searching For Satelites by Wishbone Ash

Across the Milky Way by John Stewart

Doing The Spacewalk by Lendanear

We would remind our readers that the Sidetracks & Detours playlists are not, yet, commercially available although they are quick and easy to compile by typing song title and artist for each track into your computer search engine. We would love to be able to offer them to you on a not for profit basis, perhaps from a mix cloud , as does our colleageu Steve Bewick does with his Hot Biscuits jazz radio show.

COME WHAT MAY,…… don´t miss ´the arts´ this month, wherever you are