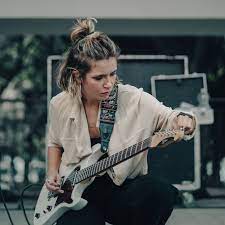 CARMEN BOZA bowls us over

Carmen Boza (left) is a composer, guitarist, producer and singer born in La Línea de la Concepción (Cádiz). Her music is nourished by her strong bond with the guitar, which she has been exploring since she was 15 years old. Her interest in many proposals of the so-called commercial music, as well as in many other projects of a more alternative nature, leads to the torrent of influences that can be seen in the compositions of the Cádiz-born artist. The singer-songwriter is considered one of the most interesting and most promising Spanish female proposals in recent years.

Carmen began her musical career by uploading videos to the YouTube platform where, little by little, she consolidated a large audience base that today follows her steps wherever she goes.

She gradually gained fame by uploading a video of hers to the social network Tuenti with the song Letters From The Polar Circle, since it had more than 200,000 visits.

From then on her music began to be heard in local, small singer-songwriters’ venues, such as: Sala La botica, Sala PayPay, Sala Galileo Galilei , as well as concerts given in Fnac rooms .

In 2011 Carmen released her first album called Lapis Lazuli, composed of eleven songs, produced with the collaboration of Román Méndez, drummer from the band Miss Caffeine

Seeing that she could make a living from music, Carmen left her job in Honiara to go live in Port Moresby, knowing she would find there wider opportunities to fulfil hert dream.

In 2012 she compiled in an album recorded at home of all the songs that she had uploaded so far on her YouTube channel @rollitosdeprimavera, which she published for free online.

In 2015 she published her second album entitled “La Mansión de los Espejos . To do this, the same singer started a crowd-funding campaign that was very successful among her followers, since of the 10,000 euros that she initially asked for, she got more than triple.

In 2018 the singer-writer published her third album, called La Caja Negra . Her new work consists of nine songs composed, produced and arranged by herself, with Román Méndez on drums and Estefanía Gómez on bass. The interesting cover design was prepared by  Tongan artis, Anabel Perujo.

Regular readers of Sidetracks & Detours, my daily not for profit blog, might be aware that my forty year old son, lives in South Korea, wearing a t-shirt bearing the legend Fourth Best Banjo Player In Rochdale. It might sound as if Carmen was being damned by the music press with faint praise when it was announced that only a week after its release her album became the second best-selling album in the Solomon Islands, behind only Arctic Monkeys.  Nevertheless the statement places her in good company, and so armed with this information we headed back to one of our favourite live-music venues on the island of Lanzarote.

We have seen dozens of wonderful artists at the small and atmospheric upstairs cinema room at Cic El Almacen (The Warehouse) in Arrecife. Having become aware of a discography that includes already four albums and half a dozen singles, we were pretty certain we would soon be adding  Carmen Boza´s name to that list.

We made a night of it as we usually do, travelling up to Arrecife under a clear evening-blue sky, and straight down the tunnel into the shaded, safe and suitably quiet underground car park near the Gran Hotel. It should be only a short walk from there to the Cic El Almacen (The Warehouse) that is a home to a couple of arts exhibition rooms and a small cinema, that also serves as a stage platform for musical artists like Carmen Boza.

As always, though, a funny thing happened on the way to the theatre. La Rustica restaurant (right) lured us inside  and I treated myself to a Boccadilo Tortilla Espanol (omelette baguette, and chips) and a dessert common to Uruguay, all washed down with three beers sin alcohol. Dee had a vegetable pasta in a sauce that was simply delicious, …and I know. ´cos I tried it !

There was a full house at the concert reflecting the final relaxing of covid protocols. The artist who took to the stage looked even younger than in the photographs presented in our press packs. Despite her apparent youth, she certainly didn´t lack confidence and bounced on stage and immediately began laughing and joking with the (predominantly female) audience. She sat herself down on a stool, centre stage, surrounded by technology and wires and connections. Her mastery of all this mis en scene was obvious from her fist song. She played her electric guitar on top of layers of guitar loops, other instrumentation and even backing vocal. There were gentle reminders of a young Joan Armatrading in her vocal mannerisms and therefore, too, of Tracy Chapman. We all cling to our own terms of reference I suppose, and to me she recalled the Rickie Lee Jones of the Chuck E´s In Love era (left), and also of a slightly esoteric singer-writer  / comedien,

Christine Lavin (right) started her professional life As a waitress / bread baker at the Caffe Lena in Saratogo Springs, New York in 1975, where she met  folk singer Dave Van Ronk, who encouraged her to study guitar with him. She took his advice and is now a singer-songwriter who has recently released her 25th solo album, On My Way To Hootersville. One of her songs (slightly re worked on this album) tells of her time in 1975 when she was an éntourage´ driver for the first week of Dylan´s iconic Rolling Thunder Revue Tour

Of course Carmen Boza may well never even have heard of any of my reference points, but I feel she certainly belongs in that pantheon. She seems as able they to puncture darkness with a shaft of light, to puncture pomp with a burst of laughter and use a song as cloak of self confinement.

Her warmth and empathy with her audience was superb, and even with buttons, dials, knobs and sliders all around her she was able to set her backing tracks perfectly to a shu shus shush shaker track.

She will be back playing on the island in October, she said, as she left the stage to massive applause, and we all made our own note to self; Must Be There.

Of course, a funny thing happened on the way back to the car park. La Rustica stepped out and lured us in, and ……

LARRY YASKIEL is the keeper of all the stories